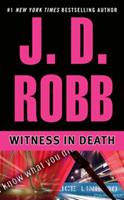 When a famous thespian is killed right before her eyes, New York detective Eve Dallas takes a new place in crime as both officer and witness to murder in this novel in the #1 New York Times bestselling In Death series. The opening night of the revival of Agatha Christie's "Witness for the Prosecution" at New York's New Globe Theater turns from stage scene to crime scene when the leading man is stabbed to death right on center stage. Now Eve Dallas...

They Keep Getting Better!!!

Published by Thriftbooks.com User , 20 years ago
I'm just blown away by this entire series. It's amazing the way J.D. Robb (aka Nora Roberts) puts out a new novel in the series every six months and they remain consistently well written. It is a fantastic combination of sci fi, mystery and romance. They get better, and better, and started out great with the first book. Each section really builds the characters, and this book I would say so far has the most emotion between Peabody and Eve. Eve reveals a little bit of a side you knew was there but she doesn't show very often!This section in the series, "Witness in Death" starts with Eve and Roarke attending opening night at the New Globe Theater (which Roarke does own) and witnessing a real murder right on the stage. This one brings a bit of Eve's past back to her and she shows a sensitive side. Another one of Eve's friends is a suspect and Eve goes out of her way to spare her. You really get to know Peabody better and she carries her own and is such a fantastic character.I love this series and it sure gets addicting. I can't put a book down and J D. Robb does a great job with the "Who done it " I never know who it is until the very end. If you haven't already, start with the first book in the series....Naked In Death! I recommend this book and the entire series...You'll love them!

Published by Thriftbooks.com User , 21 years ago
If you're a newcomer to this series, welcome to Nick and Nora in the Third Millenium. JDR has slicked up the old Thin Man concept and brought it into the future, where the world is one of excess and hyperbole in all forms. Beef and coffee are delicacies, prostitution is legalized and rigidly controlled, new drugs - legitimate and otherwise - are readily available, but the seven deadly sins are unchanged. Cars travel in all spacial dimensions and planets are for sale, but cops still like donuts...Soft-boiled Eve Dallas and her handsome, mysterious, omnipresent husband Roarke, sleuth together in a plot that regulars to the series will recognize as more psychologically oriented than its predecessors. Eve and Roarke witness a real murder onstage during the opening night of a 20th century crime drama staged as a retro-performance - one of Roarke's weaknesses is for 20th century black and white / film noire, and of course, it's his playhouse...All the players are related to one another in some way through the victim, and Eve has to look closely at the nature of love and hate in personal relationships as she struggles to figure out whodunnit right under her nose. All of the books in this series develop subplots, the strongest of which is the evolving relationship between Eve and Roarke, two abused children who have grown up to excel at what they do, but who bear the scars of their youth in grim silence - until they find each other. This story brings us regulars along a little further in their lives. Eve finally starts to conquer her ambivalence about their bond, although she clearly has a way to go. Roarke remains somewhat maddeningly cool - it'd be interesting to see him lose control once in a awhile.Reading these novels is like coming home every six months to the next installment of an ongoing saga, although we still know less about Roarke, and it would be nice to see more through his eyes. Their relationship still has a thorny side that can leave the reader just a little annoyed at both of them, which is a tribute to the empathy with which the characters are drawn. There's lots of room for other characters to shine, although fans will note that Mavis and Nadine took something of a back seat this time, to make way for Peabody, McNabb, and the up and coming Trueheart. I was waiting for this one, and now that I've finished it, I have to wait another six months for more! If this is your first book in the series, don't despair - you've got nine others to savor, and if you pace yourself, maybe you can make them last until JUDGMENT IN DEATH comes out later this year. You'll probably understand the nuances of Eve's and Roarke's relationship faster if you read them in chronological order, but I started out in the middle and then bactracked, so it's not lethal if you end up reading this book first - and it might be more fun!One thing - I wonder who the candy thief will turn out to be?

Published by Thriftbooks.com User , 21 years ago
It's a pity so many romance novelists shy away from revisiting the lives of their characters in subsequent books. When a writer creates a compelling hero and heroine, brings the reader into the world of those characters and makes us care about them...why not bring them back? Thankfully, Nora Roberts (as JD Robb) continues to do just this with NYPSD homicide detective Eve Dallas and her gabillionaire husband, Roarke. Over the course of the In Death series, we have watched their fascinating relationship begin, bloom and grow. As a married couple they are even more exciting than they were in the beginning. Surrounded by a strong supporting cast, Eve and Roarke are two of the most fully realized characters in all of fiction. In WITNESS IN DEATH, a murder takes place on stage during a live theatre performance in front of an audience of thousands. Following Eve's relentless pursuit of the truth, while continuing to battle her personal demons, is fascinating as always. Roberts continues to flesh out Peabody and MacNab while keeping the focus on Eve and Roarke. Romantic suspense, heck, fiction doesn't get much better than this.

Published by Thriftbooks.com User , 21 years ago
How does a romance author keep a relationship interesting after all the initial conflicts are resolved? Read J.D. Robb and find out. She's been keeping us in thrall of Eve and Roarke's story for eleven books.In this latest installment of the "In Death" series, it is obvious that Ms. Robb is paying homage to Dame Agatha Christie. She does a wonderful job at it, and the story is a balance of suspense and emotional exploration.As Roarke and Eve attend a play on one of her rare days off, one of the actors is stabbed onstage--and is really dead. Who did it? As Eve investigates, it turns out that everyone had a reason to hate the victim, who was a most despicable character. But don't think this is just a murder mystery; we also get a healthy dose of romance and emotional issues as Eve and Roarke continue to grapple with intimacy, an unfamiliar place for both of these strong self-reliant individuals.For those of you who have read the previous books in the series, I will add that we see more development in the love/hate relationship between Peabody and McNab, and a return of Officer Trueheart (see Conspiracy in Death). I think we haven't seen the last of him. For those of you for whom this will be a first endeavor, I strongly recommend that you read all the previous books in the series. You will appreciate the continuity of secondary characters, and get a much richer sense of where the actions/reactions in this book are coming from. From a literary perspective, it is admirable (as well as unparalleled) how Ms. Robb has kept Eve and Roarke's story so engrossing.See you in October, with "Judgment in Death".

Published by Thriftbooks.com User , 21 years ago
I have read all the books in the series in order and I have to say that this one is the best yet in character development of the principal characters Eve and Roarke. Eve is learning to enjoy the company of co-workers and friends a lot more. She is also working harder to be a part of a good marriage rather than looking in from outside. I really look forward to the next installment to see how this continues. This series is more mystery and romantic suspense than futuristic so don't be put off. If you like Nora Roberts then you'll like these books. I cannot believe she has already written ten novels in the series.
Copyright © 2020 Thriftbooks.com Terms of Use | Privacy Policy | Do Not Sell My Personal Information | Accessibility Statement
ThriftBooks® and the ThriftBooks® logo are registered trademarks of Thrift Books Global, LLC