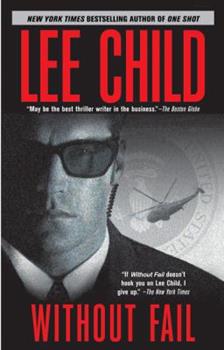 Without Fail (Jack Reacher, No. 6)

Jack Reacher is approached by a Secret Service agent who needs a favor. "I want to hire you to assassinate the Vice President of the United States," she asks. She is the newly appointed head of the VP's security detail and wants Reacher to try to penetrate her team's shield. He has the skills and the stealth and no one knows him. How else can she be sure her protection is truly effective? What she doesn't tell Reacher - but what he soon discovers...

The Day of Jack Reacher

Published by Thriftbooks.com User , 17 years ago
While Frederick Forsyth's "The Day of the Jackal" is the classic assassination thriller, Lee Child hits another home run with "Without Fail", a page turner with all the technical accuracy of `Jackal" and the extra dose of adrenaline one would expect from Lee Child. Child's hulking loner Jack Reacher certainly has the mind of an assassin, and in "Without Fail", he is contracted by Secret Service agent M.E. Froelich to audit the security for the Vice President of the United States, the target of a threatened assassination. Froelich happens to be the former lover of Reacher's older brother, Joe, the former Treasury Department agent killed in action years before. What follows is an extremely credible portrayal of the US Secret Service and the challenges they face in protecting the holders of our highest public offices. As with all Child/Reacher novels, this one is well researched rich in detail. But just as the detail begins to hint at tedium, Child metes out another measure of plot twist, keeping the reader anxiously waiting for the next installment. Lee Child is a true student of pace, understanding the fine balance between plot development and action. Reacher's no-nonsense perspective on justice, crime and punishment is faithfully intact, but in "Without Fail", we meet Reacher's female equivalent, the formidable and lethal Frances Neagley, an ex-Army buddy of Reacher's. Like Child's hero, this is an austere, blunt, and powerful novel, ultimately predictable but never disappointing along the way. Entertainment in print simply does not get much better than this.

Another breathtaking ride with Reacher

Published by Thriftbooks.com User , 19 years ago
So far, author Child has yet to deliver anything less than a riveting book. Without Fail gives us Reacher in the ultimate urban setting: the heart of the Secret Service in DC. What would, in less capable hands, have been a deadly dull tale of a highly experienced outsider brought in to help the woman in charge of the detail protecting the vice president-elect is, in Child's hands, a fascinating study of how seemingly innocuous pieces of evidence lead from point to point until the reason behind the threats and assassination attempts is revealed.Writing in the spare, tight prose that has become synonymous with Reacher's character--this man who owns almost nothing, lives anywhere, but is not emotionally unencumbered--the plot builds in pitch until it hits a crescendo, literally in the middle of nowhere. Reacher and his associate, Frances Neagley, (former military associate he has called upon for assistance on this job) work together like the proverbial well-oiled machine, and it is pure pleasure to witness how they think, how they deduce, how they calculate odds, risks, plans of action.The author allows the behavior of the primary characters to reveal their inner lives, rather than wasting precious narrative time (and flow) on attempts to explain them from the outside-in. Final words, a half-written letter, the touch of one hand on another all have great import as a result.This is a fine book. Most highly recommended.

Published by Thriftbooks.com User , 19 years ago
Without fail is the latest installment of the Jack Reacher series, and I can honestly tell you that Lee Child keeps on getting better and better.An unusual proposal (how would you like to assasinate a Vice President?) leads to a page turning thriller with intelligent and sometimes unexpected twists and turns.You don't need the background from previous novels (L. Child neatly sums everything up in few sentences), but I can only recommend that you read 'em all up.More, please!

A COMPLEX THRILLER SURE TO PLEASE

Published by Thriftbooks.com User , 19 years ago
England born, New York based thriller writer Lee Child has made an impact on his chosen genre with his first five novels. Much of the acclaim he has received is undoubtedly due to the creation of his memorable protagonist, Jack Reacher. Jack is a cool, canny and collected former military cop who needs all his skills and know-how in "Without Fail." A female Secret Service agent comes to Reacher with an astounding request: "I want to hire you to assassinate the Vice President of the United States." According to her this is the only way to test the security system she has in place to protect the newly elected V.P. When she makes this request, she does leave out one significant detail: a team of accomplished killers have already drawn a bead on the Vice President. They, of course, are not aware of Reacher's involvement. Child has spun a complex, unsettling thriller that will satisfy the most ardent suspense fiction fan. - Gail Cooke

Lee Child At His Best

Published by Thriftbooks.com User , 19 years ago
Some people want Vice President-elect, Brook Armstrong dead. They tried to kill him in September. They had the silencer on the gun and the perfect location but the bullet missed. No one in the crowd heard the gun shot. Armstrong's hair stirred as the bullet moved past him but he thought it was nothing more than the wind. The attempt was a failure and no one noticed. They would try again. Soon. ...So begins Lee Child's newest and best book to date, WITHOUT FAIL. ...This is the sixth in the series. WITHOUT FAIL takes the readers behind the scenes of the Secret Service and shows us how they react to situations, why they do what they do to protect the people they're hired to protect, and we also get to see the measures they go through to do their job successfully. Lee Child's books get better and better with each addition to the series. WITHOUT FAIL is a real page-turner with plenty of excitement all through it. Child has not only made a detailed study of his character, but he has delved into the workings of the military and government. Yes, on occasion Reacher and Neagley sometimes seem to have superhuman powers, but the readers will willingly forgive those moments to cheer on the heroes of this story. This new fast paced novel not only keeps you on your toes trying to figure out who wants to kill the Vice President-elect but also keeps you wondering why. Child gives us the answers to the questions as the book progresses. We start to understand how personal childhood experiences control our actions as adults.In WITHOUT FAIL, Child has written a wonderfully thrilling story. I highly recommend this well written book.
Copyright © 2020 Thriftbooks.com Terms of Use | Privacy Policy | Do Not Sell My Personal Information | Accessibility Statement
ThriftBooks® and the ThriftBooks® logo are registered trademarks of Thrift Books Global, LLC