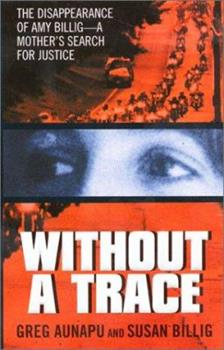 Without a Trace: The Disappearance of Amy Billig--A Mother's Search for Justice

by Susan Billig and Greg Aunapu

On March 5, 1974 -- the same day that rival motorcycle clubs roared through suburban Miami in celebration of their annual Bike Week -- seventeen-year-old Amy Billig left home to meet a friend for lunch ... and vanished. Several days later, Amy's frantic mother, Susan Billig, received an anonymous phone call saying that her daughter had been carried off by one of the biker gangs. And so began Susan's harrowing and extraordinary twenty-five-year search...

A PROFOUND AND COMPULSIVELY READABLE BOOK!

Published by Thriftbooks.com User , 20 years ago
As a reporter, I have written and read a lot of true crime stories over the years. While Sue Billig's search for Amy has filtered into the American consciousness through a variety of television pieces on Unsolved Mysteries and other news shows, no one has ever recorded the full, complex and mesmerizing story until now. No 5 minute news clip or 90 minute documentary could possibly convey the myriad bizarre complications that arise during the search for Amy, the effect on the family and the sheer amount of strange characters Sue confronts. If you thought you knew anything about this case, think again . No one else seems to have gotten it right. This is truely a modern epic on a grand scale, and Sue Billig is a modern day hero. On a sheer storytelling level, the writing is straight forward and profoundly compelling, with great insight into the human heart. This true story has more twists and turns than most bestselling novels, the pacing is just right, and the characters are so well drawn you would think they're in the room with you. If this book had been published as a hardcover first, I have no doubt it would have received the attention it deserves, placing it in the top echelon of True Crime.

You won't be able to put this book down

Published by Thriftbooks.com User , 20 years ago
Susan Billig is an amazing woman. When her beautiful, seventeen year old daughter turns up missing and is thought to have been kidnapped by a motorcycle gang, Sue Billig goes full force trying to find her child. Her tenacity and strength is unreal. I couldn't put the book down. Although after seeing Mrs. Billig on television many times, I know the outcome -- I couldn't help but wish the next page would say that she found her daughter and brought her home. There were times I was reduced to tears reading about what Mrs. Billig went through. Read it, you won't be disappointed.

Compelling from the Very First Page

Published by Thriftbooks.com User , 20 years ago
This book will grab your attention from the very first page and not let you go until you have read to the end and closed the covers on the book.You won't believe what Mrs. Billig went through, and what a heroic, amazingly dedicated mother she is.What is most unbelievable and shocking about the story is not so much the very sad and tragic disappearance of Amy, but instead the constant stalking and harrassment **Mrs. Billig** went through! And yet she and her husband remained strong and true to the end.If you want a book that you won't be able to put down, buy this one. But be prepared to cry and also to seethe with anger by the time you are done.

Published by Thriftbooks.com User , 20 years ago
This book clearly illustrates that fact is indeed stranger than fiction. Like peeling away layers of an onion, "Without a Trace" reveals the layers of horror Susan Billig endured while searching for her daughter. Greg Aunapu has cleverly assimilated this famous case into an engaging and spell binding story I simply could not put down once I started. From the ugly dark underbelly of the biker world, a cast of horrible characters comes alive which Susan Billig heroically confronts. This is ultimately a story about the human spirit, courage and everlasting hope that prevails in the face of evil.

Published by Thriftbooks.com User , 20 years ago
I always hate when a reviewer reveals things that you wouldn't want to know, so suffice it to say that this is one of the most amazing true stories I've ever read. I got to know very nasty bikers, stalkers and a bunch of creeps I would never want to meet in real life, but I'm also very glad I met Sue and Amy and the Billigs. The book jacket doesn't mention one of the most important parts of the case, which is the 23-years of stalking that Susan endured while searching for her daughter. Yeah, they catch the guy, finally, but you won't believe who it is, and I'm not going to tell you! The trial is fantastically portrayed, and the prosecutors and their strategy are very well drawn. I love legal thrillers, and this beat most of the ones I've read before. All in all, Without A Trace is a book that kept me reading from page 1 to the end, hardly able to put it down. It's also a cautionary tale that every parent and teenager should read. I had seen this story in a documentary on A & E and on 20/20, and thought I knew a lot about it, but the book tells you so much more, and then you find out that a lot you saw in the documentary isn't even quite right. There is also a lot of important information that the authors found after the documentary had already come out. My last word on this is you gotta read it to believe it!
Trustpilot
Copyright © 2022 Thriftbooks.com Terms of Use | Privacy Policy | Do Not Sell or Share My Personal Information | Accessibility Statement
ThriftBooks® and the ThriftBooks® logo are registered trademarks of Thrift Books Global, LLC