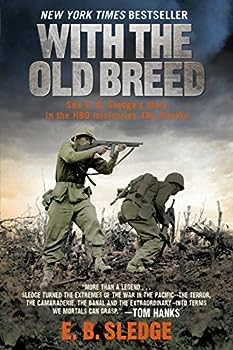 With the Old Breed: At Peleliu and Okinawa

by Eugene B. Sledge

"Eugene Sledge became more than a legend with his memoir, With The Old Breed . He became a chronicler, a historian, a storyteller who turns the extremes of the war in the Pacific--the terror, the... This description may be from another edition of this product.

Thank You to the Pacific Marines

Published by Blane W Frandsen , 3 months ago
A very moving History of this portion of the War in the Pacific. There is little glory in war as evidenced by this Personal History of E.B.Sledge. The valor exhibited by those who fought throughout the war is humbling. The debt of gratitude owed to all those who fought and sacraficed so much can never be repaid.

Published by DanaMax , 3 years ago
Sledge has a great writing style that manages to be very detail full but not detail heavy, he talks about his experience in a way you can easily grasp the hell that it was, but also chuckle about the occasional funny thing that happened.

With Gene Sledge and The Old BreedBeedd

Published by Thriftbooks.com User , 18 years ago
As I found outshortly after I first read With The Old Breed...Gene Sledge and I were in the same replacement draft which joined the 1st Marine Division on Pavuvu, British Russell Islands, but were in different units in the division. We both made the Peleliu and Okinawa landings, and his account of both battles--the savagery and bloodletting is exactly as it was. Coinicidentally, I was a stretcher bearer supporting Company K, 3d Battalion, 5th Marines, Gene's outfit but I didn't know that until long after the war. Gene became a close friend after his book was published and we exchanged experiences. With The Old Breed deserves every commendation it has received over the years, from Marine veterans and others We lost Gene to cancer several years ago, but his memory and memoir will live on and be an inspiration to Marines of this and future generations, as will the exploits of the 1st Marine Division in all of its combat operations. Benis M. Frank, Chief Historian of the Marine Corps, Retired.

SLEDGE: THE ROBERT GRAVES OF THE MARINES

Published by Thriftbooks.com User , 20 years ago
Although the cover and the title may not sound that eloquent or poetic, make no mistake, Sledge's elegy stands along perhaps 10 other wartime biographies written this century. He not only recounts war and the charnel houses of these two battles, but does it in a way that is both extremely moving in a prose style that is very reminiscent of the Robert Graves' WWI "Goodbye to all That" or WWII's Farley Mowat's "And No Birds Sang." Sledge, who is not a professional writer like the above gentleman but writes, in my opinion, equally as well. As such Sledge has written the quintessential experience of the Marine in the Pacific War. it is one of the best, eloquent, haunting, and poetic reads I have every come across, and more than most war memoirs it is very, very scary. I think that one should be able to read through it quickly. I also liked it cause I ended up clawing through the jungle in the Horseshoe region on Peleliu and seeing nothing but gun positions, caves, and small human shaped holes in the coral landscape with Sake Bottles and used and unused cartridges in the holes. I took this book to Peleliu in 1998. The Jungle has mostly come back and there are few tourists on the Island, and none off the very few trails. The caves are littered with broken Japanese Army helmets, some rusted badly, others with the green in good condition. One can see nothing but jungle cleaved coral. After passing the usual "squid pots" (what the Japanese called the small coral caves and holes the dot the island), I was suddenly standing on an old oil drum, now rusted the same colour as the brown moss of the jungle. Then another drum.... rows of drums filled with coral. About at least 50 of them lined to a depth of three of four-deep covering the entrance to a coral cave. The front of the drums were torn and shredded by large calibre fire -- probably .50 calibre I surmise by the size of the holes. Despite its layers of armour I could not help but think that the Marines probably knocked the position out early, though it would have done them little good,as this position was covered by innumerable others. Sledge describes the caves and squid pots all up to the top of the ridge. Day after day the Marines in Sledges unit went into this horror. Okinawa was Peleliu magnified 10 times -- and they were dehumanised by the entire experience to a degree that those who have never, perhaps today few ever can, experience such a degree of fighting. It should be noted that the Marines and, later, the Army siezed the ridge after 4 months of fighting. 10,000 Japanese soldiers and about 2000 Americans died on this island 3 Miles Long and 1 mile wide. I came across their bones --- femurs, skull shards, and shredded bodies all over the island. All along I had Sledge's book to keep me dark company. And so I recommend you the book. In the same way that Robert Graves kept me company in my wet soujourns to Vimy Ridge and Ypres in Belgium, so too did Sledge keep me company in that h

This book on combat ranks in the very highest tier.

Published by Thriftbooks.com User , 22 years ago
This account by E.B. Sledge, a Marine PFC who landed on Peleliu andOkinawa, details the violence and brutality of these two battles sorealistically that it is a disturbing and haunting book. Peleliu wassupposed to last 3 to 4 days, but went on for 2 months and cost theMarines 1,262 dead and 5,274 wounded. The statistics from Okinawacontain a action, and 26,221 neuropsychiatric "non-battlecasualties." At Peleliu, Sledge "had tasted the bitterestessence of war, the sight of helpless comrades being slaughtered, andit filled me with disgust." Peleliu was a jagged coral islandwhich caused cuts and tears on contact with human flesh, and there wasa lot of such contact. "It was almost impossible to dig aprotective foxhole in the rock." Once inland one's senses wereoverwhelmed by the sight and smell of corpses filled with maggots,human excrement on top of coral everywhere, dysentery, rottingAmerican and Japanese rations, huge flies, knee deep mud, rainstorms,tropical oven heat, snapping bullets, and exploding shells. More thanonce Sledge saw a Marine slide down a ridge into rotting Japanesecorpses to find himself covered with maggots and vomiting from thesmell. Peleliu was an "assault into hell;" the landscape"hell's own cesspool." After the landing, with Marinessuffering from heat prostration, even the water came from hell --itcame in old oil drums, and the oil residue caused the troops to retchin the broiling sun. When Sledge sees his comrades cutting gold teethfrom the Japanese--some while they are still alive--he is disgustedand sickened. But war, Sledge notes, made savages of them all, andone day Sledge finds himself bending over a Japanese corpse with aknife to cut out gold teeth. A corpsman tries to dissuade him, firstwith one argument and then another, finally succeeding by pointing outthe threat from germs involved. Relentlessly, Sledge and his comradesmove steadily forward, forward into the "meat grinder,"losing more and more men to injury and death, the grim"inevitable harvest." The sight of dead Marines who had beentortured and mutilated by the Japanese hardens Sledge and his comradesagainst the enemy. Sledge tells of the terror of walking across anopen field facing Japanese machine gun fire while at the same timereceiving friendly fire from the rear from a Marine tank. But therewas something "Artillery is hell," and of all the terrors,"the terror and desperation endured under heavy shelling are byfar the most unbearable." Sledge learned to steer clear of anyand all second lieutenants, who invariably did not know what they weredoing and were highly dangerous to the troops. Sledge made twoamphibious landings on Peleliu and one on Okinawa. The rulerecognized among the troops was that if you made more than twolandings you had used up your luck. Even so, Sledge was one of lessthan 10 in his company of 235 men to escape alive andunwounded--thereby beating the "mathematics of death."("Statistically," Sledge tells us, "the infantry unitsha

A masterpiece written by a front-line combat Marine

Published by Thriftbooks.com User , 24 years ago
When reading about historical events, one must consider the source. Dr. Sledge is an excellent source on the subject of Marines in combat in WWII. Dr. Sledge was really there at Peleliu and Okinawa, and on the front lines. No post-war historian could possibly describe the realities of combat with the accuracy of one who was really there. This book is a treasure not only because of its accuracy, but because it is so rare. Bookstores today are full of first-person accounts of Vietnam War veterans, but similar writings by veterans of WWII are extremely rare. If you want to read a generalized, sanitzed version of combat in the Pacific war, pick up a typical history book. However, if you want a definitive description of young American Marines fighting the ghastly horrors of combat-the worst reality of war-then this book is a must read. In my opinion, books such as this should be mandatory reading for high school students, so that they might have some understanding of how many Americans have fought and died to preserve the freedoms they now enjoy.
Trustpilot
Copyright © 2022 Thriftbooks.com Terms of Use | Privacy Policy | Do Not Sell or Share My Personal Information | Accessibility Statement
ThriftBooks® and the ThriftBooks® logo are registered trademarks of Thrift Books Global, LLC