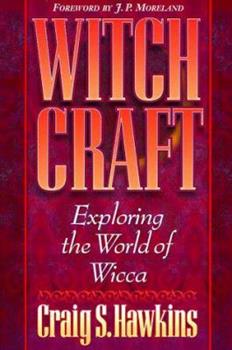 Witchcraft: Exploring the World of Wicca

Witchcraft and other neopagan religions have entered popular culture across the Western world. Craig Hawkins provides sound evaluation of a growing religion whose occultic views and practices can be deceptive. Hawkins defines witchcraft, what it is and isn't, and explains its rituals and beliefs, including magic, sacramental sex, reincarnation, and goddess worship.

A Useful Reference Work for Neo-pagans and Christians

Published by Thriftbooks.com User , 21 years ago
The book is divided into three parts with nine chapters as follows: PART I: The Contemporary World of Witchcraft {1 - The Contemporary Craft: A Relativistic Religion, 2 - Convictions of the Contemporary Craft: How Witches View Deities, Death, and Life, 3 - Setting the Stage: The Theoretical Framework for the Practices of Witchcraft, 4 - How Does the Witches' World Work? The Structure and Practices of Witchcraft}, PART II: The Biblical View of Contemporary Witchcraft {5 - The Word of God: What the Bible Says about Witchcraft, 6 - True Teachings? A Biblical Critique of Witches' Views}, and PART III: Philosophical Critiques of Witchcraft {7 - The Question of Truth: An Epistemological Critique of Witchcraft, 8 - The Problem of Evil: An Ethical Evaluation of Witchcraft, 9 - Conclusion}.Part I is broad in nature and attempts to define witchcraft within the neo-pagan context by reference to many non-Christian authors of neo-pagan and witchcraft books. Apart from input from the neo-pagan community and extensive personal reading of their books, it is difficult to ascertain whether Hawkins has accurately represented them in general, so I appreciated the earlier reviews by neo-pagans. Although I am far from well-read on the subject, what I have read seems accurately reflected in Part I (e.g., Bonewits' Real Magic, Weinstein's Positive Magic, Curott's Book of Shadows, Amber K's True Magick, Starhawk's Spiral Dance, Adler's Drawing Down the Moon - These are just some of the books I own. One video I own is "The Occult Experience"). One minor problem I noticed is Hawkins' use of the term "occult". He defines it broadly on page 55 to include not only the secret, hidden, nonnormal and forbidden but also, connotatively, (among the noninitiated and nonwitches) the mysterious and supernatural (key components to Christianity). He then quotes Isaac Bonewits and Raymond Buckland to show that many occultists see magic and the occult as involving natural, not supernatural, powers of the mind. Although this is all true, Hawkins then uses the term "occult" throughout the book as synonymous with the forbidden which promotes confusion since there are mysterious and supernatural aspects to Biblical Christianity that are obviously not forbidden but included in his broad definition of "the occult".The reason for Part II is to show what the Bible says about witchcraft in particular and forbidden practices of the "the occult" in general. Although Hawkins admits that neo-pagans don't accept the authority of the Bible (or the Christian God), he wants to refute those who try to justify their practices by appeals to the Bible. After arguing for the historical reliability of the Bible based on historical evidence to show that the early church did not tamper with the Bible to exclude certain teachings as some occultists claim, he looks at certain passages of scripture within context and references the original biblical languages to show that certain occult practices are forbid

A Must-Read for Pagans as well as Christians

Published by Thriftbooks.com User , 24 years ago
This book should be on every Pagan's bookshelf. Not only does it clearly and directly state the standard Christian objections to the NeoPagan movement, it can also help Pagans understand more precisely just what the misconceptions commonly held about our religion are, and their historical and philosophical background. NOT just another "occult-buster" this is a first-class reference for any Pagan who ever has to face and answer "hard questions," from Christian neighbors or family members.
Trustpilot
Copyright © 2022 Thriftbooks.com Terms of Use | Privacy Policy | Do Not Sell or Share My Personal Information | Accessibility Statement
ThriftBooks® and the ThriftBooks® logo are registered trademarks of Thrift Books Global, LLC