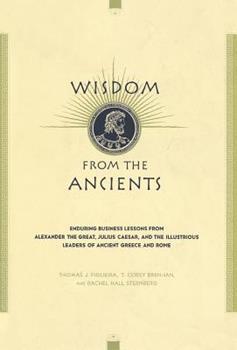 Wisdom from the Ancients: Enduring Business Lessons from Alexander the Great, Julius Caesar, and the Illustrious Leaders of Ancient Greece and R

Ancient Greece, the culture that brought us democracy, philosophy, comedy and tragedy, and the Olympic Games, and ancient Rome, best known for its military prowess, technological achievements, and imperial administration, are justly renowned for their contributions to Western civilization. Wisdom from the Ancients brings alive for today's managers the timeless insights of such larger-than-life figures as Alexander the Great, Julius Caesar, Trajan,...

Published by Thriftbooks.com User , 13 years ago
We tend to forget that business people and business management always existed. The book here is a selection of texts from ancient authors about their businesses or a problem they had to solve in Greece and Rome. I recommend the book. All lessons are still valid today!

Published by Thriftbooks.com User , 20 years ago
After taking yet another one of Prof. Figueira's courses on the ancient world, I was pleased to read something that was less overpowering to my mind. I think that Profs. Figueira and Brennan were able to capyture the similarities between our modern world and that of the ancient. They were able to apply concepts that we readily know now, to a world that we won't understand immediately. In particular the emphasis on ancient coinage was employed well.

Published by Thriftbooks.com User , 20 years ago
Caution: Some of the translations here are pretty raw in describing sexual matters. If such things offend you, this book may not be the ideal way for you to learn about better business practices. The ancient Greeks and Romans were very concerned with political, military, and financial effectiveness. Since human nature changes slowly, if at all, we should not be surprised to learn that many ancient leaders and authors had quite a lot to say that is of relevance today. The book's subjects relate to many of the tricky areas of human interaction and psychology. There are sections on leadership, building and losing constituencies, consulting and decision making, strategy, competition, collegiality and teamwork, risk taking, recognizing opportunity, communications, management-employee relations, motivation, hiring and firing, delegation, and handling success and coping with mistakes. I found the ancient materials very interesting, learning about classical figures I had not heard of before. I would have enjoyed the book even if it had not been presented as a business management book. Since the work is done by classicists, the ancient references are numerous, well chosen and spicy. As a management guide, the book is not nearly as big a success. However, I did not find it any less good than any of the books I read which regurgitate what other writers have had to say before. There were no big "ah-ha's" for me. Maybe I've been reading too many management books. On the other hand, I didn't read anything here that was a bad idea for a business person to think about. There's some very fine humor in several sections. For example, the "consultants" are usually seers, interpreters of oracles, and advisors. The explanations given for bad advice by the "consultants" are often pretty funny. Many people report knowing better when they make a mistake in these areas . . . but taking the wrong path anyway. Now I wonder what the ancients would have had to say about that?Think carefully, especially when you feel caught up in an emotional reaction!
Trustpilot
Copyright © 2022 Thriftbooks.com Terms of Use | Privacy Policy | Do Not Sell or Share My Personal Information | Accessibility Statement
ThriftBooks® and the ThriftBooks® logo are registered trademarks of Thrift Books Global, LLC