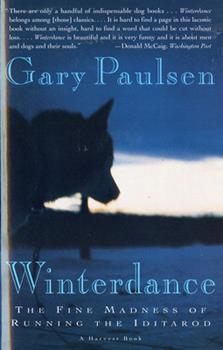 Winterdance: The Fine Madness of Running the Iditarod

An incredible sled-dog race through the Alaskan wilderness and a stunning journey of discovery and survival from the author of the beloved Hatchet. Fueled by a passion for running dogs, Gary Paulsen entered the Iditarod--the eleven-hundred-and-eight-mile sled-dog race through the Alaskan wilderness--in dangerous ignorance and with a fierce determination. For seventeen days, he and his team of dogs endured blinding wind, snowstorms, frostbite, dog...

Published by Thriftbooks.com User , 3 years ago
This is my FAVORITE book! It’s got it all! Hilarious. Informative. Interesting. Fascinating. Adventure! And all TRUE!

I haven't laughed so hard in years!

Published by Thriftbooks.com User , 18 years ago
I made the grave mistake of trying to read this book while on a public bus. It wasn't long before I realized the folly in this, as I repeatedly had to stifle the wild guffaws that threatened to pour forth without my consent. The other passengers probably came to the conclusion that I was either very sick or slightly deranged as I rocked back and forth in my seat and tried to pretend that I was, in fact, merely coughing. Gary Paulsen has offered us one of the most hilarious accounts of running the Iditarod that I have ever come across.Living in Minnesota, Paulsen had a small team of five dogs that he used to work his traplines. Over time he became more and more entranced with mushing, until he eventually realized that wanted to, needed to, run the Iditarod - the 1,100+ mile dogsled race stretching across the state of Alaska between Anchorage and Nome. The first half of the book deals with his preparation for the race - finding more dogs, training the dogs, getting the right equipment, etc. We soon see that he has quite a bit to learn. Over the course of this training period, Paulsen finds himself attacked by dogs, run away with by dogs, and often spending many miles being dragged along on the ground behind his sled by dogs. He manages to break his sled repeatedly, get separated from his team, and one night, get sprayed by five different skunks in rapid succession. He is, in short, one of the least qualified of all possible Iditarod candidates.The second half of the book takes us through the race itself. In the beginning, he makes every possible rookie mistake. He gets lost before even leaving the city of Anchorage, after putting the wrong animal in the lead-dog position:"We went through people's yards, ripped down fences, knocked over garbage cans. At one point I found myself going through a carport and across a backyard with fifteen dogs and a fully loaded Iditarod sled. A woman standing over the kitchen sink looked out with wide eyes as we passed through her yard and I snapped a wave at her before clawing the handlebar once again to hang on while we tore down her picket fence when Wilson [the lead dog] tried to thread through a hole not much bigger than a housecat. And there is a cocker spaniel who will never come into his backyard again. He heard us coming and turned to bark just as the entire team ran over him; I flipped one of the runners up to just miss his back and we were gone, leaving him standing facing the wrong way barking at whatever it was that had hit him" (pg. 145).Much of the first half of the race is a series of such uproarious follies. Unbeknownst to him at the time, the other mushers had voted Paulsen the least likely competitor to get out of Anchorage. But he eventually did, and he ultimately manages to muddle his way through the entire race. As the journey goes on, the book becomes a little more serious as we see Paulsen undergo a transformation. He learns about himself, about the dogs, and about life. He feels himself become

The fine madness of running the Iditarod

Published by Thriftbooks.com User , 20 years ago
This book packs quite a punch. Each chapter ended with this reader wincing for the author, who had just spent the night stumbling through a Minnesota swamp, his eyes almost swollen shut from mosquito bites, searching for his runaway dog team, or had been blown down an Alaskan mountainside with his team, in the midst of a blinding snowstorm.Not to mention the five-skunk night.It takes a great deal of physical as well as mental toughness to train for the Iditarod, much less run a team of half-wild dogs in the actual race."Winterdance" reminds me of Algernon Blackwood's "Wendigo:" in both stories men are caught by the spirit of the Great Northern Wilderness, and perish or almost perish. I think the most telling moment in Paulsen's book comes when he runs his team to the end of his trapline---and then keeps on going in the dead of a Minnesota winter, just to see what lies beyond the next hill. His wife's intuition to call out a search team was correct, even though Paulsen eventually did turn back. The 'Wendigo' or wanderlust had almost captured his soul.It also reminds me of "Call of the Wild." Like Jack London, Paulsen has a laconic, fluid writing style, and both authors include the Wilderness itself as one of their major characters. I won't say that either man subscribed to Blackwood's weird brand of pantheistic mysticism, but read how Paulsen slowly bonds with his dogs--and other wild animals.This book is also a grand dog story with more pratfalls than a "Three Stooges" movie. The author spent many a night on his backside, being dragged down a dirt road (or worse, through a second-growth forest) by his lusty team. Running the Iditarod takes a very special madness, and Paulsen endured moose attacks, blizzards, dog bites, and too many helpings of moose chili to draw us into his very beautiful and brutal world.

Published by Thriftbooks.com User , 20 years ago
Gary Paulsen is a master writer insofar as the young male set goes-he has written a long series of stories that have captured the imagination of young men everywhere, from his fictional wildlife adventure tales like Hatchett to his entertaining Culpeper Adventure series, Paulsen has a knack for connecting with a young male audience. He was my son's all time favorite author growing up and, last time I visited him at college, noticed he had a copy of Hatchet on his bookshelf at school. I asked him about it and he said something to the effect that his room didn't feel like home without it there. How many writers can affect people like that?Winterdance is a bit of a departure for Paulsen. As sott of younger male's version of Jon Krakauer's Into Thin Air, the book is a memoir telling the story of Paulsen's entry into the Iditarod dog sled race in Alaska. Funny, sad, poignant and riveting, I read it and enjoyed it very much. I also had my son read it and he loved it as well. I rather suspect it's on his shelf next to Hatchett.You can't really go wrong with Paulsen, but this is one of his very best works, which makes this one of the best works ever for this genre.Want to help your son, nephew, whomever to love to read while making your son, nephew, whoever very happy? Give them this book.

I really did laugh right out loud!

Published by Thriftbooks.com User , 23 years ago
My co-worker gave me this book with a note that said "read this, you will laugh out loud!". So, as a dog lover I read it. Sure enough, I laughed right out loud and had to get myself together to call my co-worker to laugh with her. The book was so well written, so concise and yet so full of everything it is to know dogs. The Iditarod must truly be a race of crazy people, but I sure enjoyed my trip with Gary Paulsen. Now I want to read more of his books! Everyone with dog should read this book! I loved it!
Trustpilot
Copyright © 2022 Thriftbooks.com Terms of Use | Privacy Policy | Do Not Sell or Share My Personal Information | Accessibility Statement
ThriftBooks® and the ThriftBooks® logo are registered trademarks of Thrift Books Global, LLC