Winter in the Blood

A contemporary classic from a major writer of the Native American renaissance -- "Brilliant, brutal and, in my opinion, Welch's best work." --Tommy Orange, The Washington Post During his life, James Welch came to be regarded as a master of American prose, and his first novel, Winter in the Blood , is one of his most enduring works. The narrator of this beautiful, often disquieting novel is a young Native American man living on the Fort Belknap Reservation...

Published by Thriftbooks.com User , 12 years ago
It's been several years since I've read this book, but what I remember is walking away from it very satisfied and impressed. Enjoy.

Wisdom and Beauty Among the Ruins

Published by Thriftbooks.com User , 12 years ago
This is one of the most moving, one of the most touching books about the American West that I know. From the incredible first paragraph right to the last sentence, this is an important story of a young man living somewhere between the world of his Native American ancestors and the mean streets of the modern American West. I've read and read the book many times, yet several scenes always catch me off guard with their beauty and emotional power. And as I read those sections, I still discover tears running down my cheeks. Jim Welch was a friend of mine. He was a beautiful and very kind man who always had time for young writers who were trying to learn their craft. I can still hear his voice, and I miss him all the time.

A book of sorrows, comedy, and joy

Published by Thriftbooks.com User , 17 years ago
James Welch is probably Montana's foremost Native American writer, and this wonderful novella is evidence of considerable talent. Published 30 years ago (1974), it takes place in the shadow that was cast by the nation's approaching bicentennial. While neither bitter nor angry, it manages anyway to portray a country that has little to show for itself but "greed and stupidity." The values it embraces are finally those available to every American, native or otherwise - compassion and respect for life and the living.The story concerns a few days in the life of a 32-year-old man, descendant of Indians and living in two worlds, his mother's home on the reservation and the dreary bars and hotels of nearby Havre and Malta, Montana. His days and nights blending together in an alcoholic haze, he meets a deranged white man, picks up women and gets punched in the nose. Meanwhile, he is haunted by a past that includes the death of an older brother and an injury to his knee that multiple operations have not remedied. Out of these unpromising circumstances, Welch finds the beginnings of a kind of personal salvation. By reaching back through the memory of a blind old man's act of charity, he restores the younger man's vision of himself.Among the ranks of modern Native American writers, such as Louise Erdrich, Welch opens up a world for non-Indian readers that goes well beyond the usual stereotypes. His Indians are strikingly individual, absorbed in the everyday, motivated as much by self-interest and cock-eyed notions as their white counterparts. In Welch's hands, a conversation among five of them can be as comic and absurd as Ionesco. Meanwhile, the Native American past is there to ground a person with a sense of purpose and identity. For all its sorrows, Welch's story is finally a joy to read.

Published by Thriftbooks.com User , 20 years ago
Winter in the Blood is a tour de force. Welch draws on Blackfeet (not "Indian") culture and history here, and he relies directly upon that tradition for the mythic center of this extraordinarily tight novel. If the reader doesn't know about Old Man and Old Woman from Blackfeet stories, he or she will miss much here, and if the reader expects stoic and vanishing Indians in another cliched novel there is bound to be disappointment. Welch uses this comic novel to comment brilliantly upon the long history of genocide Native Americans have to deal with and something like survivor's guilt that confronts Native people today. At the same time, Welch parodies from a Native perspective such mainstream American icons as T. S. Eliot and Saul Bellow. Readers not familiar with Native American, and particularly Blackfeet, traditions and cultures and accustomed to the usual stereotypes may well be confused by this superb novel, but the fault will lie with the reader and not the text.

Winter in the Blood:Should We laugh or Should We Cry?

Published by Thriftbooks.com User , 23 years ago
The ambition of criticism, it is often said, is to obtain a balanced view of the writer's work that is criticized. But where the work in question is Winter in the Blood this is peculiary difficult, which is illustrated by the great variety of critical response that ranges from Reynolds Price's reaction that it is "a nearly flawless novel" to an unsigned review in the New Yorker which refers to the novel as "an interesting, if seriously flawed first novel." The contrast between these opposite reactions makes clear that the reading of this novel is greatly determined by our experiences with 'Indian' novels, hence with our expectations. The second, in my opinion, 'seriously flawed' reaction is perhaps based on the reviewer's 'tyranny of expectations', reinforced by the fact that Winter in the Blood is indeed confusing with regard to the way it should be approached. On the one hand you feel like falling about with laughter at the excruciatingly funny situations in the book, while on the other hand you try hard to supress that laughter out of respect for the Native's past and present, solely based on our limited view that books by Indian writers cannot be funny because their life and tragic history is not funny. Paradoxically, by being respectful, we are, in fact, disrespectful; by refraining from laughter out of respect for the Indian situation, we are at the same time, unintentionally, disrespectful because we categorize the Native works of art beforehand as serious, angry or whatever term that fits the stereotypical expectations. Critics have approached the novel anthropologically, sociologically, psychologically, philosophically, politically, oneirocritically, and comically. Whatever the emphasis, all may hold some truth in their approach and therefore an eclectic mixture of these approaches seems to offer the best way of making sense of the novel, or as Thomas Arnold once wrote, "the way to get a great writer understood is not to raise as much discussion about his meaning as possible, but as little as possible," in other words figger it out for yourself.

Winter in the Blood Mentions in Our Blog 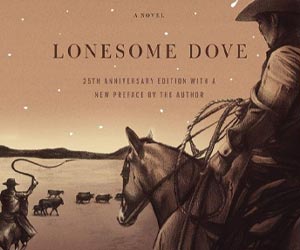 Get Lost in the Wild West
Published by Ashly Moore Sheldon • June 05, 2019

Celebrate Larry McMurtry's 83rd birthday this week with one of these rip-roaring Western adventure tales.