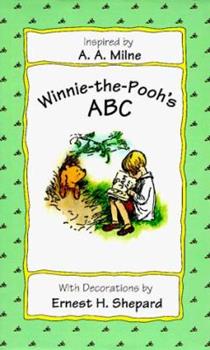 Discovering the alphabet is more fun than ever when children can learn their letters with the "Best Bear in All the World". From apple to zoo, familiar words and images from the four Pooh classics adorn the pages of th is charming book. Each letter is represented in large type in both its capital and lowercase forms. Full color.

Published by Thriftbooks.com User , 16 years ago
This is a wonderful book I used it in a lesson plan with kindergarteners when I was doing my student observation/student teaching. This book helped hearing children ages 5-6 with memorizing and saying their ABC's. This book has also been a favorite for my 3yr.old to learn his ABC's in two languages. The pictures are all of the classic pooh and also teaches you new words in American Sign Language.-Veronica

Published by Thriftbooks.com User , 16 years ago
I love this book for the 2-1/2 year olds and older children to teach them the alphabet in a book medium. I have been doing Child Care since 1983 and have used several curriculums for the teaching of my children. The children relate to Winnie the Pooh and recognize the alphabet letters at the same time. They get their own book. It's left in their drawer at my home and take it out at free time and go through the book at their leisure. When it is time for school work they get their own book from their drawer and we sit at the table and each child gets a turn saying the letter a loud. This teaches them responsibility of caring for books and learning how to read a book. The alphabet is just a plus. When I first came across this book I liked it because it was not complicated with text, children do not really care about. I bought it as another way for teaching the alphabet letters with Winnie the Pooh. This has worked for me since 1996. The older books did not have the American Sign Language in it. I love these newer versions because I also teach ASL in my Day Care and the children are reminded of their letters in another medium. When the children know their alphabet letters they are free to take home their book and keep it. This is a great and in-expensive reward from me to them. They value their book and accomplishments as well. This also takes the pressure off the slower learners. I am very happy with this book for my Day Care. Alice Gess, Holyoke, MA

Published by Thriftbooks.com User , 17 years ago
I tend to avoid what I think of as "knock off" books-- I'll buy the original Miss Spider, but not a silly "count to ten" board book with Miss Spider, and so forth. So, my initial reaction to a "Pooh" ABC book was kind of negative. However, there are not a lot of board books out there for younger children that are also ABC books and are large enough for their little hands to hold and look at the pictures. This book combined the classic book aspect that I look for in children's books, with the practicality of a pretty large board book with ABC's. If I had to criticize something, it would be that some of the pictures are not very bright in color, but that is something that you always encounter with Classic Pooh-- the illustrations are beautiful, and the colors are subdued, making them pretty, but perhaps not as engaging. Then again, I tend to think children are over-stimulated enough so soothing pictures can be nice for once. I would recommend it to anyone looking for a nice, sturdy ABC board book.

Published by Thriftbooks.com User , 21 years ago
This is definitely a simpler ABC book. Each page just has the upper and lowercase letter one picture and one corresponding word D Dragon, etc. My biggest disappointment was that the pictures are of the classic pooh and I prefer the newer ones.

COUNT TO TWELVE WITH CLASSIC POOH

Published by Thriftbooks.com User , 21 years ago
balloons to umbrellas candles boots baskets. Cute but I thought the items chosen were a little boring. Keep in mind all the drawings are in the old style of Pooh (classic Pooh). Each two page layout for each number is basic. For example "seven baskets" seven different color baskets and the number 7.

Winnie-the-Pooh's ABC Mentions in Our Blog 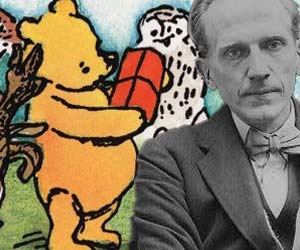 From his humble beginnings in a poem and then a children's story to his starring role in a mega Disney franchise to Novel Knockout champion, kind-hearted Winnie the Pooh has brought joy and comfort to generations of readers and viewers.