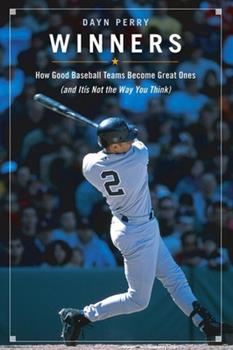 Winners: How Good Baseball Teams Become Great Ones (and It's Not the Way You Think)

Why does your team float around the .500 mark year after year while other franchises always seem to be in contention? How do some teams make that incredible leap from worst to first in just a season or two? If you could corner your team's owner and general manager--say in mid-October when neither you nor they have anything better to do--what advice would you give them so that you can spend next October at the stadium? Plenty of ideas, but you're not...

Published by Thriftbooks.com User , 13 years ago
Perry offers a graduate-level course in Moneyball: The Art of Winning an Unfair Game by mining the statistics of the 124 MLB playoff teams from 1980-2003. More descriptive than prescriptive, Perry works with averages, and (for those of us who aren't sabermetricians) some strange new acronyms such as SNLVAR, PRAR, and VORP, to isolate the tendencies of good teams. I use the term "tendencies" advisedly, because dealing with averages and comparisons reveals tendencies but not causation, so the subtitle of the book overstates its case. It is still fascinating reading for a baseball fan, as Perry breaks down the reasons usually given for success on the field: great hitting, great pitching (starting, middle relief, or closer) , defense, base running, deadline deals, experience (or youth), payroll, and luck. Perry generally does a good job making the numbers clear as he recalculates, adjusts, and ranks them for us, then pulls examples from the teams and players to explain the on-the-field side behind the numbers. Sometimes, these team and player profiles overwhelm the numbers, and sometimes Perry goes too far afield so that the reader loses his point, but it makes for interesting reading anyway. And no, there is no magic bullet for success. Perry's numbers reveals some trends, but they aren't so dominant or consistent that there is only one clear way to build a winner. You need some sluggers (power over average), you need to play better than average defense (valuing speed over fielding percentage), you need pitchers who throw strikes to keep runners off base, you need a manager who utilizes his bullpen and baserunning strategies wisely, and you need to draft well and retain your best free agents. Within those general guidelines, there are countless different stories, and it is that myriad of ways the game plays out on the field that keeps us coming back to baseball.

Published by Thriftbooks.com User , 16 years ago
While the title may be misleading - Perry doesn't really explain how good teams become great - this is still an interesting read for both casual and serious fans. It's a good look at the assumptions made about winning teams, and one that allows the reader to draw their own conclusions. The chapters are divided into topics like "the slugger" and "the closer," pieces that are assumed should be combined to make a great team. Perry then takes a closer look at what each of these items has contributed to teams that have made the playoffs over the past 25 years. There is very little in the way of heady mathematical formulas, and Perry isn't trying to push his own beliefs. Like the reader, he simply seems curious to know the role each of these items has played. If there's a problem with the book, it's that there seems to be very little correlation between the items examined, and the actual art of winning. In most cases, good teams do tend to do the things we expect, but it doesn't always come across in impressive numbers. It might be unfair to say that there's not enough correlation - perhaps it's better to say that there isn't what I would say is overwhelming evidence, at least in most cases. There's some mathematical significance to many of the numbers, but little that will blow away the reader. Despite this fact, the book is still one that I'd recommend. Perry writes with a good wit, but without the condesencion that sometimes creeps into efforts by the BP gang. He obviously has a good sense of humor, and it works well in combination with his equally obvious knowledge of baseball. He occasionally goes off onto tangents about particular players, like Pedro Guerrero or Cesar Cedeno, and these make for some of the best parts of this book. If you're looking for answers, you're not likely to find them all here. However, if you want something interesting, and something that will make you think, this is a good read.

Winners is a winner

Published by Thriftbooks.com User , 16 years ago
Perry deftly and entertainingly navigates through numerous topics focused primarily on the common attributes shared by teams that made the playoffs from 1980 - 2003. Perry avoids the common pitfalls associated with writings containing stats by providing compelling and enjoyable narrative to illuminate his statistical conclusions. In short, the numbers he uses are sound and the stories behind the numbers sufficiently support his points. If you love baseball and you are interested in knowing more than the blather provided by the likes of Rick Sutcliffe and Joe Morgan, this book is for you. Simply put, read this book and you will know what you are talking about.

Published by Thriftbooks.com User , 16 years ago
Non-stat heads: don't be scared off by the fact that Dayn is a contributor to the sabremetric-oriented site Baseball Prospectus. This is a book that is one to be enjoyed by both stat-heads and casual fans alike. "Winners" takes a numbers-oriented approach to how successful organizations get that way and stay on top. Dayn takes a look at the 124 playoff teams since 1980 and digs into the numbers to see how they got there. Was it starting pitching? Speed? Power? Dayn tackles such issues with solid statistical data that even a layman like myself can understand. I especially enjoyed the back story on guys like Pedro Guerrero, Ricky Henderson, and Dwight Gooden who enjoyed enormous on-field success and in some cases, a tragic post-baseball career. Some of his stances on the value of a stolen base in terms of producing runs and wins and the use / misuse of a team's bullpen could cause some controversy, but he explains his position quickly and concisely to the point where you can't really argue with his conclusions. Give it a shot!

Published by Thriftbooks.com User , 16 years ago
Perry writes for Baseball Prospectus, but this is not the typical book one would expected to be come from one of BP's writers. Avid readers of BP may be disappointed as there will not be much new to them in this book. This book can serve as a good introduction to the intelligent way of looking at baseball statistics that is common at BP. Throughout the book, Perry refers to studies done by the folks at BP (Nate Silver and others), Bill James, Voros McCracken and others, and explains them thoroughly in English (as opposed to Math) that will make sense to everybody. Perry's subjects are the 124 teams that made the playoffs from 1980 to 2003. Throughout the book, he introduces biographical information about many different players and teams - to the point where the book is better described as a biographical look at the 124 playoff teams with a sprinkling of statistics rather than the reverse. This was not what I was expecting, but after getting over that surprise, the book is a fine read. Overall I recommend it for baseball fans who are interested in learning more about the intelligent use of statistics. That audience is a much bigger audience than the typical BP subscriber, so the book should do just fine. The 5 stars I give this book is reflective of the target audience.
Trustpilot
Copyright © 2022 Thriftbooks.com Terms of Use | Privacy Policy | Do Not Sell My Personal Information | Cookie Preferences | Accessibility Statement
ThriftBooks® and the ThriftBooks® logo are registered trademarks of Thrift Books Global, LLC