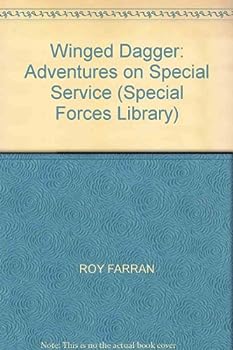 An eccentric and charismatic officer, Roy Farran rose to command an SAS squadron during World War II. His fascinating story of the early days of Britain's Special Service became an immediate... This description may be from another edition of this product.

Adventures on Special Service sums up this book accurately enough

Published by Thriftbooks.com User , 14 years ago
The book covers the period from 1940 to 1945 and chronicles the adventures of the author over this period, being split into 3 parts. Part I covers the Middle East 1940-1943 and covers Farran's part in Wavell's successful campaign against the Italians in Cyrenaica and the subsequent withdrawl as Rommel's Afrika Corps arrived and counterattacked. Farran's unit withdrew and was reequipped and sent to Crete, where he fought alongside the New Zealand Army (he has a lot of nice things to say about the Maori Battalion). Farran was captured, ended up in a prison camp in Greece and escaped. He ended up back in Egypt, back with Tanks again, and fought on the Western Desert and El Alamein, where he was injured. Following injury, he was evacuated to South Africa and then back to the UK in 1943. End of Part I. Part II covers Farran's time with the Special Air Service. He'd managed to escape from the UK back to the Middle East where he was looking for active service and stumbled on an acquaintance in the SAS. He was promptly recruited, trained and started on SAS operations with the invasion of Sicily, where he led a SAS unit. This section covers SAS operations in Italy during 1943 where the SAS roamed in jeeps behind the enemy lines in the early part of the invasion. Farran then participated in SAS operations behind German lines in France in 1944, where he led a SAS unit operating with jeeps in roving attacks. Part III covers SAS operations in Italy in 1945, where SAS units joined and led units of Italian partisans in attacks on the Germans. The book really is an account of Farran's adventures during the war. It's an interesting account, pays no attention to strategy or tactics except in passing. He concentrates on the actions themslves and his part in them, what he did, what his immediate unit did and what he felt and thought at the time. He's a good writer, you can get a good idea of what it must have been like and you can recapture some of the emotions and feelings of the times. The book was written in 1948, soon after the war ended, there was no sympathy for the Germans and in those non-PC times, Farran could be quite open about actions that would now result in expressions of outrage - machine-gunning surrendering Germans in Crete for example - something any New Zealander of the time would have been quite happpy to assist with after some of the atrocities committed by the Germans against NZ'ers there. It's a good read but don't expect a history of the SAS or anything like that. It's a history of Farran's adventures in the war - which included 2 years with the SAS and 3 years prior to that with the Armoured Corps fighting in the Western Desert and Crete. Stirring stuff indeed!
Trustpilot
Copyright © 2022 Thriftbooks.com Terms of Use | Privacy Policy | Do Not Sell or Share My Personal Information | Accessibility Statement
ThriftBooks® and the ThriftBooks® logo are registered trademarks of Thrift Books Global, LLC