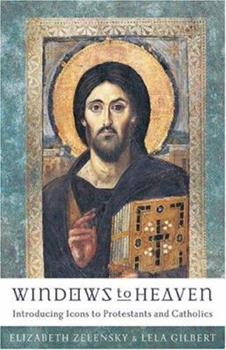 Windows to Heaven: Introducing Icons to Protestants and Catholics

by Elizabeth Zelensky and Lela Gilbert

Evangelicals often feel uneasy when they encounter the haunting images of Orthodox icons. From the theological to the practical, questions flood in: Why are the facial expressions so fixed? Why the colorful robes? What do the images symbolize? Do Orthodox Christians worship icons? Doesn't that make them idols? In this useful guidebook, Elizabeth Zelensky and Lela Gilbert debunk common misconceptions about Orthodox icons and explain how they might...

A Protestant is Introduced to Icons

Published by Thriftbooks.com User , 13 years ago
I know next to nothing about Orthodox Christianity, much less icons. I knew enough not to consider them idols (a major pitfall of Protestants when approaching this issue) but other than that, I had no idea what they meant, why they're done in their particular inverted style, and how they're used by Orthodox Christians. Windows to Heaven: Introducing Icons to Protestants and Catholics is, as far as I know, a great book on the issue. Written by Eastern Orthodox university professor Elizabeth Zelensky and Episcopalian author Lela Gilbert, the book is an accessible, quick read full of information and inspiration. The introduction beings by recounting various reactions to icons. "They look creepy." "People bow before them and treat them as idols." "I'm inspired when I walk into an Orthodox Shrine." "They give me a sense of peace and in a sea of sin and chaos." Instead of dealing with each Protestant contention with icons at the beginning of the book, Zelensky and Gilbert work their way slowly through the issue, dedicating each chapter to explaining the history, artistic style, and theological meaning of particular icons, and their place in Orthodoxy. This is not a work of modernist apologetics, a naked appeal to a people consumed only with respect for rational thinking stripped of beauty; and it is not a post-modern work, a naked appeal to people who consider condemnation of anything the only sin. It is a perfect blend of reasonable presentation, beautiful language, awe at the power of God, commitment to not hiding or apologizing for their beliefs, and biblical support. Each section is bookended with testimonies from the authors and quotes from Orthodox and Protestant hymns, adding a personal and poetic dimension to the beauty presented. The work is not a defense of all of Orthodox theology; issues where I may differ with them, such as the process of salvation and sanctification, and original sin, are explained in part but only in relation to understanding the icons. This is not a pitfall of the book, as the book is meant to help others understand icons, a particular part of their theology, not the whole of Orthodox theology. This bring me to another noteworthy aspect of the book: detailed footnotes with titles the reader can peruse if they seek a deeper understanding of Orthodoxy. If you're interested in a preliminary understanding of icons, this is a great book with which to start.

Published by Thriftbooks.com User , 16 years ago
WINDOWS TO HEAVEN: Introducing Icons to Protestants and Catholics is a collaboration between Elizabeth Zelensky, a Russian Orthodox lecturer of history, and Lela Gilbert, who appears to be a convert from Protestantism to Orthodoxy. The subtitle doesn't really match the book. While it does try to communicate the truth of icon veneration to Protestants ("they aren't idols", etc.), this effort is very brief, no more than a couple of pages. Catholics hardly need an introduction to iconography, since it is part of their own tradition, but the authors could have clarified how the Orthodox Church rejects the innovation of statuary. What the book does, however, is lay out the origin and symbolism of five common icons: Rublev's icon of the Trinity, the Vladimir Theotokos, Theophanes' icon of the Transfiguation, the Dormition of the Virgin (minus the "Jew trying to profane the Virgin" addition), and the Sinai Pantocrator. Hence the book will be of great interest to not just Protestant or Catholic inquirers, but anyone interested in iconography, even Orthodox themselves. The writing is somewhat odd. On one hand, the work has meticulous footnoting as if it were an academic work, but Gilbert's "personal stories" are sappy and amateurish. The work doesn't follow the usual post-Soviet standards in writing also "Kiev" instead of the preferred "Kyiv", and the typesetting leaves much to be desired. Nonetheless, if the five icons discussed in the book dazzle you and you would like to understand them better, WINDOWS TO HEAVEN is worth reading.

Nicely Written with Poise and Heart

Published by Thriftbooks.com User , 16 years ago
Once in awhile, a book is produced that is unpretentious in its thesis, gentle in its handling of the source, and appropriately communicating the heart of its message with respect to all parties. "Windows to Heaven: Introducing Icons to Protestants and Catholics" is such a book. Written by Zelensky, an Orthodox Christian and Gilbert, a Protestant, this book seeks to teach non-Orthodox Christians about the importance of icon traditions. They explain what an icon is and is not, dispelling myths held by many Protestants. The book does more than just to educate about the difference, but provide information on how Protestants can appreciate icons as well. Many Catholics will find the material familiar, but Zelensky does bring a more Eastern approach that many Catholics may appreciate: nice, inexpensive and rewarding book.
Trustpilot
Copyright © 2022 Thriftbooks.com Terms of Use | Privacy Policy | Do Not Sell My Personal Information | Accessibility Statement
ThriftBooks® and the ThriftBooks® logo are registered trademarks of Thrift Books Global, LLC