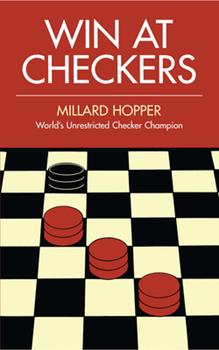 Improve your game or learn checkers from Millard Hopper, the Unrestricted Checker Champion of the World. Here is a book that will appeal to all your questions -- often even before you ask them -- and impart many of the championship secrets of a perennially popular recreation.The book actually presents, in simple terms, a lifetime of checker experience by one of the greatest players of all time. Individual chapters discuss the basic principles of the...

Learn from a master

Published by Thriftbooks.com User , 14 years ago
This is a great book for the "serious" checker player. You can really show off with the moves in this book.

Published by Thriftbooks.com User , 14 years ago
Here's my story: My brother is a chess Master...but he also is an accomplished checker player. It was checkers that helped us become, what I consider, "best friends". He used to beat me all the time at checkers, but it didn't bother me, because I was learning. Then I found this book. The tables turned. Now, as a lifetime member of the American Checkers Federation, I look at the 100+ books and can honestly say that this one is the best.

A Great Way to Get Started

Published by Thriftbooks.com User , 20 years ago
If you know little about "real" checkers this is the book to get you started. It is entertaining and witty and helps you learn conceptual thinking about the game. It covers tactics ("pitches" and "shots") and important endgame positions. I didn't rate it 5 stars because it is really light on opening play; you'll need another book such as Reinfeld's for that. The book is inexpensive yet contains hours of useful instruction. If you've played on-line, stared at the board and wondered "what next" or if you're losing because of blunders, this is THE book to read first.

Published by Thriftbooks.com User , 21 years ago
I began playing checkers at YAHOO a few months ago. Got killed. When I was a young boy (48 now) I remember getting beat at checkers by my older sisters to the point where I would get so angry that I'd throw the board across the room during the game. And so, once again I was getting stomped by 15 year old Austrailians. I read this book. And re-read it. And studied it. Now I WIN most of the time. It's a very fast way to become a good intermediate player. Buy it!

Published by Thriftbooks.com User , 25 years ago
Hopper's book is one of-if not the-best available for the player who wants to become" a pretty good" player. It contains basic information about the the game that will take you a step above the average player. For example ,there are several common techniques for pulling off two for one and two for three jumps. After finishing the book--and practicing a little-- you will be a better player and have a better understanding of this much misunderstood game. It's a rare book: good and cheap
Trustpilot
Copyright © 2022 Thriftbooks.com Terms of Use | Privacy Policy | Do Not Sell or Share My Personal Information | Accessibility Statement
ThriftBooks® and the ThriftBooks® logo are registered trademarks of Thrift Books Global, LLC