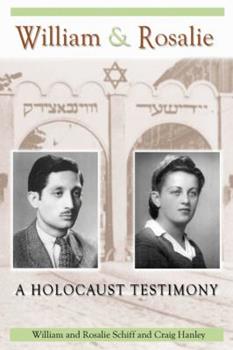 William & Rosalie is the gripping and heartfelt account of two young Jewish people from Poland who survive six different German slave and prison camps throughout the Holocaust. In 1941, newlyweds William and Rosalie Schiff are forcibly separated and sent on their individual odysseys through a surreal maze of hate. Terror in the Krakow ghetto, sadistic SS death games, cruel human medical experiments, eyewitness accounts of brutal murders of men, women,...

Published by Thriftbooks.com User , 13 years ago
This book came just as promised: quickly and in excellent condition. It's a graphic and gripping account of how two young people, newly married, survived the holocaust in separate camps. Amazingly, they found each other after the war. More remarkable is that today, they tour and speak to young people regularly (in the United States), making a profound difference in their lives despite the sadness they must experience when retelling their story over and over. Thank you Rosalie and William for sharing it with us.

Another testament to human courage

Published by Thriftbooks.com User , 13 years ago
I have read a lot of books written by people who experienced the Holocaust,either as perpetrators or victims. William and Rosalie were victims.It was their unbreakable courage and determination to reunite that made them go on just one more day,one more hour,one more step. What they witnessed and endured is inconceivable to those of us who are only able to read their stories. William and Rosalie lived,and are determined to spread the word about what hatred can bring about.The young people they speak to are at once fascinated and horrified,but regardless,are better for the hearing.

A powerful story that needs to be told over and over...

Published by Thriftbooks.com User , 14 years ago
This is a well-written and riveting story of love, endurance, suffering and God's provision. The explanations of the atrocities committed by the Nazis to William, Rosalie, their families and friends is horrible and hard to absorb, but reading it is only a fraction of the pain that these two brave people endured. Having met, listened to and visited with both William and Rosalie, I can attest to the scars that they carry as well as the passion they have for sharing their stories with others. They continually re-open old wounds by telling people what happened to them in hopes that the true story of the Holocaust will never be ignored or forgotten. I strongly encourage you to get this book, read it, and learn from it. We must NEVER FORGET.

A riveting, harrowing, dramatic, true story, the stuff of which block buster movies and television m

Published by Thriftbooks.com User , 14 years ago
"William & Rosalie: A Holocaust Testimony" is the personal story of William and Rosalie Schiff who were a young couple struggling to stay alive during the Nazi holocaust in which German antisemitism motivated the torture and murder of their families, friends, and neighbors. Now both in their eighties and living in Dallas, Texas, their story is effectively and accurately narrated by Craig Hanley is a seminal biography detailing their experiences, the loss of their families, their years of torture at the hands of their Nazi captors, and their struggle to find each other after the war ended. This is a riveting, harrowing, dramatic, true story, the stuff of which block buster movies and television mini-series are made from. "William & Rosalie" is a welcome and informative addition to the growing body of Holocaust literature, made even more valuable as the survivors of that generation are now dying off and the attempts by neo-fascist, neo-Nazi, and Islamic anti-Semites at denying the Holocaust are continuing unabated. Enhanced with family photographs, a 'Key to Inter-Chapter Photos', and a selected bibliography of suggested further readings, "Williams & Rosalie" is particularly distinguished by an underlying message warning of the dangers of prejudice and ethnic hatred. Now academic or community library should fail to include a copy of "William & Rosalie" in the Judaic Studies or Holocaust Studies reference collections.
Trustpilot
Copyright © 2022 Thriftbooks.com Terms of Use | Privacy Policy | Do Not Sell or Share My Personal Information | Accessibility Statement
ThriftBooks® and the ThriftBooks® logo are registered trademarks of Thrift Books Global, LLC