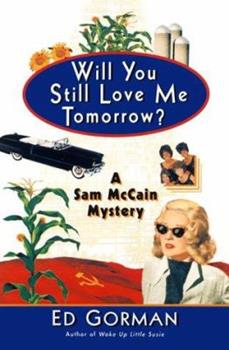 Will You Still Love Me Tomorrow?: A Sam McCain Mystery

(Book #3 in the Sam McCain Series)

A murder in the heart of 1950s Iowa entangles a love-struck Sam McCain in an investigation that could stir up trouble in the wake of Nikita Khrushchev's upcoming visit to the state.

Love and murder on the Iowa plains

Published by Thriftbooks.com User , 21 years ago
Ed Gorman's dimunitive detective, Sam McCain, has his hands full in this latest entry in the mystery series. Sam has loved, and lost, and loved again, and the concept of missed opportunities runs through this novel as a unique backdrop to the murder mystery within it.The great Red Scare is in full swing and even McCain's beloved Black River Falls with its quirky citizens and unique history fall to the whipped up hysteria.Sam keeps his cool, though, despite tripping over more bodies than a medical examiner trainee. A fatally wounded man stumbles to his office to die; a famous man, or as famous as a man from Black River Falls gets. Richard Conners -- rich, successful, and connected -- had wanted to hire McCain to "hold something" for him, and comes to McCain's office to die.McCain doesn't expect the bumbling police to solve the murder so he begins to look into it and almost immediately runs into a buzz saw in the form of Karl Rivers, a professed FBI agent looking for communists and communist sympathizers. When Rivers turns up dead in McCain's closet, Sam realizes there's somthing really serious going on in Iowa.The novel is introduced with a quote attributed to W. H. Auden: "I smell blood and an era of prominent madmen." Gorman does a marvelous job delivering the late 1950s to us as seen through the prism of a modest-sized Iowa town. The Red Scare is not limited to big cities. There are witch hunts everywhere, even in small town Iowa where a spinster teacher is seen as possibly subversive and has to publicly defend herself.Gorman populates his stories with interesting and engaging characters and does more than tell a good yarn. He leaves you feeling reminiscent of those long ago days when you could get a good breakfast for 60 cents, where a triple feature at the drive in costs a buck, and where a man could make a decent living as a private investigator in a small town, solving a murder.The story moves quickly and is satisfyingly layered. ....

McCain's Back and Better than Ever!

Published by Thriftbooks.com User , 21 years ago
September 1959, Khrushchev is visiting Iowa and the citizens of Black River Falls are caught up in the "Red Scare". Richard Conners, a left-leaning professor, political writer and the town's biggest success story is murdered and found with a hammer and sickle painted in blood on his forehead. Sam McCain, a young lawyer who's just getting started and still earning most of his money with his private investigator's license is taking this crime personally. It seems Conner's body ended up dead in his office. Between the anti-communists and left-wingers, a jealous wife and various other citizens, not too fond of Conners, McCain doesn't lack for suspects. But when some of them start turning up dead, too, Sam knows this isn't just about politics. It's starting to look way too personal..... Ed Gorman has done it again. Taken you back to small town life in the nostalgic 1950s with a murder mystery that's just pure fun to read. His quirky, unrivaled cast of characters are wonderful. His writing crisp and smart and full of witty and irreverent dialogue and his vivid scenes, laugh-out-loud funny. This is the third book of a terrific series. If you're new to McCain and gang, start at the beginning with The Day the Music Died. If you're already a fan, you won't be disappointed. Easily read in one sitting, Will You Still Love Me Tomorrow is a winner.

Published by Thriftbooks.com User , 22 years ago
In 1959 throughout the heartland, everyone knows the Ruskies are coming with Khrushchev visiting Iowa. The Soviet Premier's visit stirs up much activity as the anti-Communists shout "Better Dead than Red." Right wing activists target left wing sympathizing Americans such as noted local writer Richard Conners.Taking the threats to his life seriously, Richard turns to attorney-sleuth Sam McCain. However, someone still kills Richard painting a hammer and sickle on the victim's forehead. Sam begins to investigate his client's murder with the biggest problem being there is plenty of rabid suspects in Black River Falls.The third McCain trip back to the fifties is a wonderful trip back in time especially for the older members of the boomers. The story line is fun, the mystery is complex and taut, and the milieu is perfect as Ed Gorman presents Cold war bogeyman number one Khrushchev (with shoes on) visiting Iowa. Sam is a fabulous guide to the era. The historical tidbits add to the feel of a great novel that vividly brings to life an intriguing historical moment that only Mr. Gorman and perhaps the Chambers Brothers would understand.Harriet Klausner
Trustpilot
Copyright © 2022 Thriftbooks.com Terms of Use | Privacy Policy | Do Not Sell My Personal Information | Cookie Preferences | Accessibility Statement
ThriftBooks® and the ThriftBooks® logo are registered trademarks of Thrift Books Global, LLC