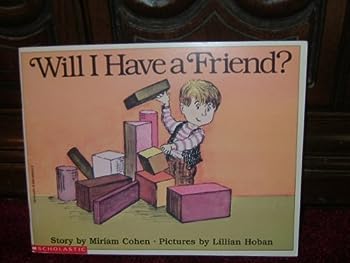 Will I have a friend?

This description may be from another edition of this product. Jim faces his fears of making a friend on his first day of kindergarten in this picture book by Miriam Cohen, chosen as the Library of Congress's Children's Book of the Year. When Pa was taking Jim to...

Published by Thriftbooks.com User , 11 years ago
"Will I Have a Friend?" is an excellent book for young children starting new schools. A young boy is worried his first day of school that he won't have any friends. All day he is nervous, doesn't know what to say or how to approach the other kids. He finds himself on the sidelines watching. He eventually meets a boy and that gets him invited to join the group. It was a good day after all. He has a friend. My kindergartener checked this book out from her library and read it before I even got a chance to read it to her. It is not for the earliest beginning readers. I would place it about first grade level. However, it also makes a good book for parents to read to their children. "Will I Have a Friend" is a story to which many children can relate. If your young child will be starting kindergarten or a new school and you are looking for a book to allay his fears, this is a good one to read.

Will I Have A Friend

Published by Thriftbooks.com User , 12 years ago
Will I have a Friend? I have used this book as a opener for the past 10 years or more. I am a Pre-K Teacher so I know that children are a little scared when starting in a new school or even going to a new classroom. This story helps break the ice. My children love it so much they want me to read it over and over again.

Published by Thriftbooks.com User , 13 years ago
nice book to read kindergarten students at the beginning of the year - the boy listens and watches and in the end makes a friend

Published by Thriftbooks.com User , 21 years ago
For over thirty years, this book has answered one of a young child's most important questions about starting school: will I have any friends? Walking to school on the first day with his father, that's the question Jim asks. His father smiles down at him and says, "I think you will." Jim's a little intimidated at first. "All the boys were making noise. All the girls were laughing. Where was his friend?" Like my two oldest kids, Jim stands at the edge of the action and waits for someone to invite him to join in. It takes awhile. He hasn't found his friend by snack time. He hasn't found his friend by rest time. Where is his friend? After rest time, the boy who was lying down next to Jim shows him a toy truck. Jim promises to bring his toy gas pump. He's found his friend! I wish my parents had shared this is a straight-forward, slice-of-life story with me when I was a shy three year old starting nursery school. It wouldn't have made me more outgoing, but it might have made me a little less nervous.

An excellent book to help preschoolers with friendships.

Published by Thriftbooks.com User , 21 years ago
This is a great book for preschoolers about making friends. I thought the scenario was very similar to what many preschool children encounter when they enter a group of strange children and try to make friends. Jim wonders who will be his friend in his new school (which could also be a daycare); some early encounters with other children are disappointing, but eventually he forms a bond with another boy. This book can help three to five year olds anticipate social situations at school or child care.
Copyright © 2020 Thriftbooks.com Terms of Use | Privacy Policy | Do Not Sell My Personal Information | Accessibility Statement
ThriftBooks® and the ThriftBooks® logo are registered trademarks of Thrift Books Global, LLC