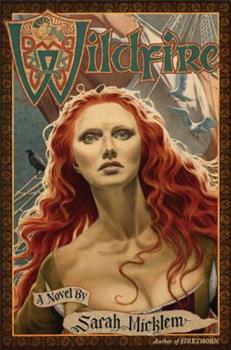 (Book #2 in the Firethorn Series)

Micklem brings her lush prose and rich imagination to the second installment in her literary fantasy trilogy, set in an imaginary world as real as history and as marvelous as legend.

La-ah-ah-ove this book! Just love it!

Published by Thriftbooks.com User , 12 years ago
Please don't make us wait too long for the conclusion of this trilogy. I can't describe how well written this book is. The series is superb, the plot so well thought out, the main character very human. I wish there were more books like this, with a story line so out of the box, one never knows where it will take the reader. Kudos to the author!

A page turner that left me wanting more.

Published by Thriftbooks.com User , 12 years ago
I reread Firethorn before reading Wildfire, so it was fresh in my mind and from that I can say that I enjoyed Wildfire much more than Firethorn. A big plus is that Sire Galan is not present for most of the book causing trouble, though Firethorn is very capable of causing trouble herself. Without Galan's presence we got to see how Firethorn handles things on her ownThe book had many twist and turns that kept me on my toes and wanting more. We are introduced to many new characters including the King of Incus, whom they were going to war against. Also, Firethorn gets many more abilities and talents through out the book, making her more than just a greenwoman/sheath. I can't wait for the next book to see how the trilogy is concluded and if Firethorn life finally settles down.

Firethorn and Wildfire -- my favorite books EVER!!

Published by Thriftbooks.com User , 12 years ago
I'm not great at reviewing books, and some of the other reviewers here have done a much better job, but I'll give it a try since there are so few reviews of this book thus far. Like everyone else who loved Firethorne, I waited five long years for the sequel -- I absolutely loved Firethorn and I can't believe it was Sarah Micklem's first book. Wildfire was definitely worth waiting for -- a long lasting and luxurious read. Now I can't wait for the third and final book, but if it takes her another five years to write another novel this wonderful, like Firethorne I will find the strength and patience to endure! (And I hope it's just as long or even longer -- I don't want this series to end!) And I plan to reread Firethorn and Wildfire in anticipation of it's release. I always wondered and imagined what life must have been like for a woman living in medieval times and I wondered how a woman could have possibly survived if she wasn't born rich or entitled, "dark" and "gritty" don't even begin to describe how awful and hard it must have been, and I think the story of Firethorne's life explains how it could have been endured -- it seems likely that back then people must have burned much more brightly in the short amount of time that they had on this earth. I'm an older fan of the Lord of the Rings trilogy, and to me Firethorne and Wildfire are the first fantasy novels that have even come close to duplicating that kind of far-ranging adventure. Now if we could just convince Peter Jackson to produce the film version . . .

Published by Thriftbooks.com User , 12 years ago
When we last saw Firethorn, she had resolved to follow Sire Galan to war rather than retreat to the country house he had provided her. As _Wildfire_ opens, she does just that. But the gods aren't finished with Firethorn yet. Before she reaches the city of Lanx, where she will be reunited with Galan, Firethorn is struck by lightning. She survives, but not unscathed. Firethorn comes away from the incident with several ailments, most notably aphasia. She often says one word when she means another. What I found most interesting about her speech disorder is that it sometimes reveals uncomfortable truths, such as when she accidentally refers to the bloodthirsty Queen Mother, whose name is Caelum, as "Callous." Firethorn does reunite with Galan, but their time together is short. She falls into the custody of Prince Corvus, who is fleeing into exile in the neighboring country of Lambanein. He finds Firethorn's prophetic dreams useful and takes her along. In the treacherous mountains that separate the two kingdoms, and later in Lambanein as a servant, she faces new dangers and the continued meddling of the gods. If _Firethorn_ was the story of Firethorn and Sire Galan, _Wildfire_ is Firethorn's story alone. Throughout the novel, her quest is to discover what the gods want with her, and what sort of person she should strive to become. We follow her as she tries to help others, bargains with gods, and sometimes loses her way. Like _Firethorn_, _Wildfire_ is not for the faint of heart. It's gritty, often gruesome. There's one scene in particular, right at the end, that I hope fades from my memory soon! However, I found _Wildfire_ rewarding. I enjoyed the beautiful writing and the heroine's personal journey. As the novel ends, Firethorn has a renewed sense of purpose, but I know there will be more twists and turns ahead for her in the third book. I'm looking forward to reading it, and hoping there's some peace or contentment at the end of Firethorn's road.

Published by Thriftbooks.com User , 12 years ago
Wildfire: A NovelI waited five long years for the second book by Sarah Micklem, the first book being Firethorn, but it was well worth the wait. Well written and not afraid to write about violence and other aspects of war, this book is dark fantasy and not for everyone, however I think Micklem has written another gem.
Trustpilot
Copyright © 2022 Thriftbooks.com Terms of Use | Privacy Policy | Do Not Sell My Personal Information | Accessibility Statement
ThriftBooks® and the ThriftBooks® logo are registered trademarks of Thrift Books Global, LLC