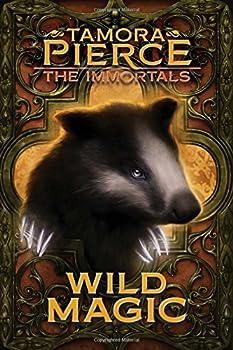 (Part of the Tortall Series and The Immortals (#1) Series)

Discover a land of enchantment, legend, and adventure in this first book of the Immortals series, featuring an updated cover for longtime fans and fresh converts alike, and including an all-new afterword from Tamora Pierce. Thirteen-year-old Daine has always had a special connection with animals, but only when she's forced to leave home does she realize it's more than a knack--it's magic. With this wild magic, not only can Daine speak to animals,...

Published by Thriftbooks.com User , 5 years ago
This book - and the series it starts - is literally the best fantasy novel I've yet to find for a passionate animal lover with an interest in the fantasy genre. The characters are amazing, the stories are engaging, and the Tortall world just keeps getting better! This series is tied for my favorite of Tamora Pierce's Tortall books.

Published by Thriftbooks.com User , 15 years ago
I just finished listening to a full-cast audio version of Wild Magic, by Tamora Pierce. This is the first book in Pierce's Immortals quartet, which is a follow-on series to her Song of the Lioness quartet. I had previously listened to another Tamora Pierce book (Circle Of Magic #1 : Sandry's Book), and I really didn't see what all the fuss was about. But I liked Wild Magic much more than I expected to. It's the story of 13-year-old Daine, an orphan with an unusual gift for communicating with animals, living in a land where many people have magical abilities. Daine actually seems to be part animal: creatures flock to her, defend her, and will do just about anything for her. Sometimes, in fact, she fears losing her human self, because she bonds so completely with animals. Despite her abilities, Daine is a vulnerable young girl. She's ashamed of her common upbringing and the fact that she doesn't have the usual "gift" of magic, and she mourns her lost family. Her animal friends keep her grounded, however, and she has a blunt, unique voice that gradually wins over human friends, too. Through her gift with animals, Daine gets a job as an assistant horse mistress for the kingdom of Tortall. There she is trained in her type of "wild magic" by mage Numair, and uses her gift to help Tortall to defend itself from enemies. And enemies abound, as a rival kingdom begins a series of stealthy attacks, drawing on the power of strange immortal creatures. Daine slowly finds her place among the people of Tortall, but finds everything she now cares for threatened by these attacking immortal creatures. The full-cast audio of this book is excellent. Daine's voice is perfect, usually pleasant and young, but becoming almost strained when her friends are threatened, or when she has to yell to get attention. When Daine communicates with her mind, there's an echoing quality to the audio, so that it's clear that the words aren't spoken aloud. The voices of the other characters are, for the most part, distinct and recognizable (though I had trouble distinguishing between a couple of the women). I especially liked the voice of Sarge, a relatively minor character, but one who's voice stood out. I don't usually think that full cast audios are necessary, but I did enjoy this one. Overall, I thought that Wild Magic was an engaging story, featuring several strong characters, and detailed relationships between the characters. Tortall is a fully realized world, and I look forward to visiting again. This book review was originally published on my blog, Jen Robinson's Book Page, on June 22, 2006.

the defining work of fantasy literature

Published by Thriftbooks.com User , 20 years ago
Even now, at age 13, riffling through the well worn pages of my beloved Immortals series, I wonder how it is humanly possible to write books so amazing. I've always loved fantasy, and Tamora Pierce is my favorite author, and always has been. This entire series is a must read for any fantasy nut. It's just like a good smoothie - the perfect blend of everything. Humor, adventure, a touch of romance and a whole lot of enchantment, I consider the Wild magic story one of Ms.Pierce's finest. The young girl Daine, who has the wonderful gift of animal speech, and even shape shifting, starts out as a sad orphan who's lost her family.It was wonderfull to "watch" her slowly heal, and discover herself shinig through her past. But I really felt myself connect with all the characters, and I consider that one of the most important things about novels. I recommend this book for anyone who likes a good fantasy.

Published by Thriftbooks.com User , 20 years ago
This book is set in the land of Tortall during the reign of King Jonathan the III and Queen Thayet. A girl named Daine and her horse Cloud travels to a fair in Cria.A trader named Onua questions Daine and almost doesn't accept to take her with her. Though, eventually Onua does. And the start of an adventure begins. Daine meets up with Alanna(one of the Queen's riders) and a shape-shifting man named Numari Salmalin. Both of they are gifted, Numair being a mage. They encounter Stormwings, which haven't been seen for centuries.For unanswered reasons the immortals have escaped their imprisonment in the Divine Realms. Wrecking havoc where ever they go. Alanna, Numair and Daine have planned their way to go to Pirate's Swoop. On the way Numair and Alanna sense a strange power in Daine. One that has not be seen for years. Daine has Wild Magic, the ability to communicate with animals. Numair helps her train, helping her control it more.This book is one of my top five favorite books. It is really amazing and I'm not just saying that. Tamora Pierce has crafted an excellent novel and it's shame she hasn't won any awards for it(correct me if I'm wrong). It's one of those books you pick up and can't stop reading. Somethings were unclear in the begining but they all straightened themselves out in the end. But some questions were left unaswered so some plot could be used for the next novel, Wolf Speaker.I reccommend this book to anyone who likes to read. I'm not that really into fantasy, but I LOVED IT! Trust me, this book is worth the read.

Published by Thriftbooks.com User , 21 years ago
Tamora Pierce, the greatest author of all time, has written another miracle. No mere words can express my heartfelt praise: funny, thoughtful, top-of-the-line, number one, At . . . how about it's just, plain wonderful? Daine, a girl blessed with the unique ability to speak with animals, is hired by Onua, the woman that manages the Rider's ponies. The story weaves together danger, adventure, humor, and love in perfect unison. It also touches on the subject of finding your true self, which I thought was brilliant. I have read Wild Magic, cover to cover more times than I can possibly count. It's perfectly suited to all ages groups. Fifth graders read it and think it's cool the way a girl can talk to animals, whereas high school students may read it and relate to the loyalty, bravery, and compassion of all the characters. If you're going to read one book in your entire life, make this one it. It's a journey unlike any other you have ever encountered. My copy is ragged and torn, but I look upon it like an old friend. I am an extremely avid reader, and out of all the books i've read, i have yet to see one come even close to ranking with Wild Magic. READ THIS BOOK!

This book is Tamora Pierce's best book yet!

Published by Thriftbooks.com User , 24 years ago
I have read all Tamora Pierce's books so far and I think this is her best yet! This book is about Daine a 13 year old who has 'Wild Magic' which means the power to communicate, change into, and heal animals. In this book she faces off to the evil stormwings and their queen, Zaneth Bitterclaws. But she is not alone in this fight for she soon teams up with Cloud a horse with strong opinions, Numair who teaches her about her 'Wild Magic', Onua who hires her to help with the horses, King Jonathon, Queen Thayet and the Riders and Kitten a baby dragon. They all know the emporer of Carthank is involved somehow with all the 'Immortals' running about but they can't prove how. Alanna is also in this book so if you've read the 'Song of the Lioness' series this is a must read. This book is full of magic and fantasy and is my favorite book so far
Copyright © 2020 Thriftbooks.com Terms of Use | Privacy Policy | Do Not Sell My Personal Information | Accessibility Statement
ThriftBooks® and the ThriftBooks® logo are registered trademarks of Thrift Books Global, LLC