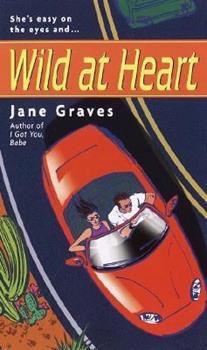 (Book #2 in the The DeMarco Family Series)

YOU CAN RUN FROM THE PAST . . . When private investigator Valerie Parker tails a cheating wife late one night, it s business as usual until the woman is murdered and the man she s with becomes the prime suspect. Val gets an even bigger shock when she discovers the suspect s identity: He s Alex DeMarco, an old flame she swore she d never speak to again. But then Val s own life is threatened, and before she can blink she s on the run, side by side with...

Published by Thriftbooks.com User , 16 years ago
Jane Graves burst on the single title romance scene with I've Got You, Babe, a story that will leave you laughing out loud. In Wild at Heart, she takes her books a step further. Alex DeMarco is a great tortured hero and this is the perfect setting for him. Every Graves book is amazing. This is a special treat.

Published by Thriftbooks.com User , 19 years ago
Alex DeMarco is a hard man...the man who broke Valerie Parker's heart and destroyed her chance at her dream job. Now, he's accused of murder. Val's the prosecution's chief witness. But despite the evidence she doesn't believe Alex could have murdered anyone...and she's going to help prove it. Along the way old sparks are ignited. Will their passion burn itself out, or can they keep the flames alive this time?A wonderful romance, with characters you'll love. Jane Graves tells a story you won't be able to put down!

Published by Thriftbooks.com User , 19 years ago
All of Jane's books are so good, but I never thought she could make Alex a hero after my heart. Boy was I wrong! Alex unseated Bobby Tom Denton of Heaven, Texas as my all time favorite hero. The book is incredible, the characters fantastic. And you'll LOVE the DeMarco family.

Published by Thriftbooks.com User , 19 years ago
Alex DeMarco walks into the Blue Onion bar to have some beer, play some pool, and try to forget that he have had one rotten day. Then he stumble into a woman with a mission of sex with red hair, red dress, red stilleto heels, and she clearly won't take no for an answer. Despite all of his instinct shouting "No", Alex drives her home anyway. Then she turnes up dead and Alex finds himself as the prime suspect. And the one who will seal his fate as the murderer is the woman who despise him the most. Valerie Parker is a PI working to find evidence of a cheating woman. The problem is, the cheating woman is now dead, and the suspect is the man that she swore never speak to again. Val once loved Alex DeMarco, until one night, he made love with her only to break her heart and shatter her dream the next morning. Alex pays Val a visit to find out everything she know. Then somehow, Valerie get shot and Alex has a feeling that it must have something to do with the fact that she is the prime witness. So now, they both work together to clear his name and protect her life from the real murderer. As they work together, the also find out that the old sparkling attraction they have five years ago is never really gone.I love this book! I have been waiting for its release since I got my hand on Renee and John's (Alex's brother) story in "I Got You, Babe". Alex made an appearance there and I couldn't wait to read his own story. Alex is a very tough guy. Some of his friends joke that he is Superman. He intimidates a lot of people, except Valerie Parker. She is a smart and independent gal who drives him crazy all the time. It's very sweet to see Val challenges Alex every step of the way, arguing with him, and to see how Alex realizes his feeling for her despite all that. Jane Graves also put a sweet story of the secondary character Stanley and Glenda. Although, the only DeMarco family appear here beside Alex is his youngest brother Dave and his cousin's wife Brenda (Brenda always put a smile to my face). I hope this is not the end of The DeMarcos. I really want Dave to have his own story ... He's a single father and also a patrol cop. His story will be very interesting.

Five Stars Are Not Enough

Published by Thriftbooks.com User , 19 years ago
In romance novels, it is not the destination--that inevitable happy ending--it is the journey. No author crafts a better trip than Jane Graves, one of the genre's rising stars.WILD AT HEART opens with the best first chapter ever; no one who reads those early pages will be able to put down this novel. Graves is a master, with a such a command of language that she sculpts her sentences as much as she writes them.There is a lively and riveting plot. One of Jane Graves' greatest skills is that she takes a storyline that is implausible, but not impossible, and she makes it actually seem very likely. The scenes at the small town Texas fair and the game preserve as so visual that they beg for a movie, maybe with George Clooney and Julia Roberts in the leads.The earlier book featuring the de Marco brothers cried for a sequel; this sequel calls for a screenplay. And the notes at the back promise that a third novel in this series already is in the works. Terrific!
Trustpilot
Copyright © 2022 Thriftbooks.com Terms of Use | Privacy Policy | Do Not Sell or Share My Personal Information | Accessibility Statement
ThriftBooks® and the ThriftBooks® logo are registered trademarks of Thrift Books Global, LLC