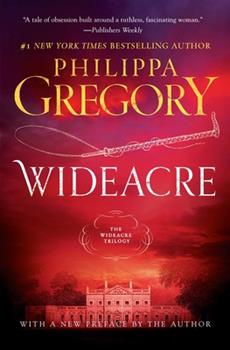 (Book #1 in the Wideacre Series)

From #1 New York Times bestselling author Philippa Gregory comes the stunning first novel of a thrilling trilogy about the Lacey family, and the captivating woman at the heart of a power-hungry estate willing to go to any means to protect her family name. Beatrice Lacey, as strong-minded as she is beautiful, refuses to conform to the social customs of her time. Destined to lose her heritage and beloved Wideacre estate once she is wed, Beatrice will...

Published by Reader , 1 year ago
I am a big fan of Philippa Gregory and historical fiction, but I could not finish this book. There are characters you love, characters you love to hate, and then there is the main character of this book. Not creatively evil, not particularly interesting, just obnoxious and repetitive. If I had to read one more page about how she loves Wideacre I might have thrown the book out the window. Not my cup of tea.

Published by Thriftbooks.com User , 3 years ago
Great start for the series!!!! A page turner

Brilliant, dark and disarming, with the proverbial anti-heroine!

Published by Thriftbooks.com User , 16 years ago
This is one of the most disarming historical novels I have read in a long time! Wideacre is a novel set during Georgian times (late 18th Century to the turn of 19th Century) with some gothic undertones. Beatrice Lacey loves the Wideacre estate so much that she'd do just about anything to obtain it. And that includes plotting the death of her father, a man who adores his daughter so much that he had taught her how to ride horses when she was a little girl in spite of her mother's objections. In order to carry out her plans, Beatrice seeks the help of her brother. She knows about his dark desires for her and takes advantage of the situation. What transpires is an incestuous relationship that carries on long after they are married respectively. They have children together, a secret that is kept from their spouses. Beatrice and Harry's sins destroy everything around them, which could well include their beloved lands. There are various twists throughout the novel. The topic of incest is definitely a disturbing one and I had a difficult time sticking to the story because I was truly spooked by such a taboo subject matter. Beatrice is the proverbial anti-heroine in more ways than one! But it was Harry that truly made my skin crawl. His desire for his sister sickened me. Their actions were truly disarming throughout the novel. Going back to Beatrice, she is quite a piece of work. She reminds me of Scarlett O'Hara -- a far more twisted version of Ms. O'Hara. You feel no sympathy for this character and she soon becomes someone you love to hate. The main characters are truly unlikable and the story is one of the most bewildering ones I have read. So why am I giving it five stars? Because it's brilliant! Philippa Gregory has created a protagonist that is meant to disturb the reader to the max. The gothic feel of the language makes things all the more morbid. If you like historical novels with a dark, gothic storyline, then Wideacre is for you. This is the first part of a trilogy and I cannot wait to give the other two novels a whirl.

Published by Thriftbooks.com User , 16 years ago
Phillippa Gregory is one of my favorite historical fiction writers. Her characters are vivid and real - even though the heroine is not a traditional romance heroine, in fact she behaves very badly - you feel compelled to hope for Beatrice's ultimate success. All three novels in this series (Wideacre, Favored Child, Meridon) have different and interesting heroines and describe the social conditions of Georgian England from all aspects of society. The cruel aspects of enclosure are brought home better than any dry school class, yet the history never overshadows the story. A very entertaining and compelling read.

Published by Thriftbooks.com User , 16 years ago
And yet--- for some reason I could see why each thing she did was what she thought she had to do. Killing one's mother is not nice, but-- anything for the old home place. Beatrice Lacey makes Scarlett O'Hara look like Mother Theresa. Never have I read a book with a female main character so evil, so devious, so downright mean. Yet, at the core of her character, all she wanted was security at Wideacre. If she had had that, she probably would have been teaching Sunday School-- or whatever they had back then. Just when you think she has reached the lowest she can go, she destroys somebody else. At times I was so disgusted I could hardly read on-- well, not really, I lapped it up- and other times I was pulling for her. It's a real page-turner, and I can hardly wait to read the sequel, The Favored Child. I have it ready to go, and I've peeked a little-- the kids have grown -- so I can hardly wait to see how they turn out. Beatrice looks like an angel, acts like the devil, and woe to anyone who gets in her way. I loved it !!!

Beatrice Lacey: the character I most love to hate

Published by Thriftbooks.com User , 18 years ago
If you thought Scarlett O'Hara was an immoral, nasty woman who would do anything to hold on to her family's land, you ain't seen nothing yet. Beatrice Lacey, the (anti)heroine of "Wideacre," is a thousand times worse...but she makes delightful reading.It's a shame the editorial review spoiled the important plot points, because I think they're even more deliciously awful when you come upon them by surprise. Every time you think you've finally got a handle on just how low Beatrice will stoop, she turns around and does something else even worse, brimming over with schemes that wouldn't ever occur to "normal" people.I had trouble putting the book down, and raced through the last few chapters, completely captivated and dying to find out what would happen next. A truly satisfying read.On a final note, I agree with previous reviewers who stated that this book shouldn't be filed in the romance category. While it does occasionally stray slightly into "bodice ripper" territory, you're not going to find hearts and flowers in this book.

Wow - this is one amazing book!

Published by Thriftbooks.com User , 22 years ago
I just have to say first that this book is always put into the romance section in book stores - and I feel that is very wrong. This novel is erotic - but it is by no means a romance. Anyone looking for a happy book with a tidy conclusion had better look elsewhere! This novel tells the story of Beatrice Lacey, a young lady of the 18th century who realizes at a young age that the only things she wants out of life are "land and loving." Yet as she is a girl, Beatrice is destined to be denied owning the land she loves - the Wideacre estate of the title. Beatrice's struggle to possess Wideacre - which often leads her into dark and evil things - is the main subject of this book. Yet it also packs a few feminist punches, gives the reader grand descriptions of life in England during the 18th century, and introduces one of the most appealing heroes in all historical fiction. Those who read the book without falling in love with Ralph have problems! The two next books in the series are a delight as well! Read it now!
Copyright © 2020 Thriftbooks.com Terms of Use | Privacy Policy | Do Not Sell My Personal Information | Accessibility Statement
ThriftBooks® and the ThriftBooks® logo are registered trademarks of Thrift Books Global, LLC