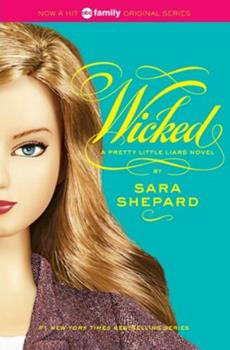 #1 New York Times bestselling series The fifth book in the #1 New York Times bestselling series that inspired the hit ABC Family TV show Pretty Little Liars. In idyllic Rosewood, Pennsylvania, four very pretty girls just can't help but be bad. Hanna will do anything to be Rosewood's queen bee. Spencer's digging up her family's secrets. Emily can't stop thinking about her new boyfriend. And Aria approves a little too strongly of her mom's taste in...

Published by Thriftbooks.com User , 11 years ago
From the very first book, I was addicted to this series. It takes an intriguing storyline to begin with, then compounds upon it in ways you could not have imagined. This book is so hard to put down; you find yourself reading for hours wondering, "What's going to happen next? Who is it? What happened that night?" Truly a page-turner. My hat's off to you Sara Shepard; keep them coming!

Published by Thriftbooks.com User , 11 years ago
I really enjoyed this book. The girls were older so to me it was more interesting. And they matured more in this book. Spencer thinks she is adopted, so she goes through great measures to try and find her adopted mom, only to have the worst thing imaginable happen. Emily has gotten over her love for girls and has her eyes set on a sexy new boy. Hanna is going through everything to make sure that she is at the top of her school. She wants to be the most popular and sexy girl there. What does she do to get it? And Aria grew up the most for me. She hasn't seen her English teacher since he moved, and she seemed to be getting past the older guy thing until her mom's new boyfriend comes into the picture.

Published by Thriftbooks.com User , 12 years ago
WICKED SARA SHEPHARD Contemporary YA HarperTeen Rating: 4.5 Enchantments I love the PRETTY LITTLE LIARS series. It really has it all, a great mystery, scandals and characters that keep you glued to the pages anxiously wondering what will happen to them next. While it looks like Ian is finally getting what he deserved for Ali's murder, suddenly the girls are faced with a brand new A. Someone's sending more threatening text messages and taking photos, threatening to expose brand new secrets and turn everyone lives back upside down. And that's the last thing everyone wants, especially with the start of Ian's trial so close. But when the worst thing that can happen does, suddenly the girls find themselves worried about their own safety. I love how Ms. Shephard creates a world of tension, casting suspicion on a whole new cast of characters, causing the reader to wonder how they could be tied to the new faux A and even in the case of one or two, how they could be tied to Ali's disappearance all those years ago. There's new potential scandals for each of the girls too, Spencer's real parentage; Hanna's worries about her soon-to-be stepsister, Aria's `relationship' with her mother's new boyfriend and Emily's unexpected attraction to someone new. One of my favorite parts of WICKED was the party Spencer's parents threw near the end of the book. All the action comes to an unexpected climax and while Spencer finds herself remembering more about the night Ali disappeared; Aria finds herself in a situation she never expected and Hanna does what she thinks is the smart thing to save herself from what she believes Kate has planned, but is it really? A great addition to the series, WICKED picks the tension back up again, throwing doubt on the possibility that Ian is really Ali's killer. I can't wait for the next book `Killer' to come out this summer and see what happens to the girls next. Sara Shephard graduated from NYU and has an MFA from Brooklyn College. Sarah's PRETTY LITTLE LAIRS novels were inspired by her upbringing in Philadelphia's Main Line. Visit www.prettylittleliars.com for PLL gossip, giveaways and exclusive series secrets. Lisa Enchanting Reviews February 2009

Published by Thriftbooks.com User , 12 years ago
Ian Thomas is in jail awaiting trial and the girls are able to relax and return to their lives. Or can they??? Just when the reader thought that the mystery of A has been solved at the end of UNBELIEVABLE, more bizarre events await the girls of Rosewood. Hanna, Spencer, Emily, and Aria slowly try to settle back into their normal lives. Hanna is working through the trauma of learning that her best friend tried to kill her. She tries to live with her soon-to-be step-sister, Kate, and build up new friendships at school. Spencer is dealing with the cold shoulder she is receiving from her family. And through her grandmother's will, Spencer has just learned that she might be adopted. Aria has ventured to an art exhibit on her own, only to learn that the guy she was maybe flirting with was the artist himself. And finally Emily has met a boy. A boy that sends tingles through her. The four girls still meet to discuss their grief and pull themselves together for the trial that is about to begin. But when Ian is released on bail to attend to his dying mother, the mysterious text messages start again. Each girl receives messages that are more haunting than the ones before Ian was arrested. Now, the sender seems to be stalking them. The messages are sent at the most inopportune times, and some even come with photos attached; photos that were taken mere moments before the text arrived. As the trial looms nearer, the girls are again thrust together trying to piece together the life that was Alison DiLaurentis. In WICKED, the reader gets a glimpse of the past and how the five girls initially became friends. The story hints at the Time Capsule and the flag pieces that bring the girls together. In WICKED, Ms. Shepard brings the reader even deeper into the intrigue that is Rosewood. Told in alternating voices by each of the girls, the pieces of the puzzle slowly start to come together. The wonderful thing about the PRETTY LITTLE LIARS series is that Ms. Shepard is able to lead the reader down one path, only to leave the ending wide open and wandering off in a different direction. With the shocking ending of WICKED, the reader will be waiting anxiously for the next installment, KILLER, due out in June 2009. Reviewed by: Jaglvr

Published by Thriftbooks.com User , 13 years ago
The infamouse "A" who was harrassing the pretty little liars- Hanna, Aria, Spencer, and Emily is dead and Alison's accused killer is in jail, so all should be good for the girls, right?? WRONG- the girls are once again getting harrassing text messages signed "A", and he or she seems to be following the girls every move.... And to make matters worse the person accused of killing Ali is released on bail. He swears he is innocent, and is determined to find the real killer at any cost... Wicked was an AMAZING read, and IMO revived the series. I admit to being disappointed in "Unbelievable"- it felt rushed and sloppily put together, but "Wicked" brought back all that i loved about the pretty little liars series. We also learn more about the girls when they were younger, which *I* think will end up leading to what REALLY happened the night Ali was killed. Be ready to read this book in one sitting (it is that good), and get ready to scream when you realize the next book isnt due out until June!
Copyright © 2020 Thriftbooks.com Terms of Use | Privacy Policy | Do Not Sell My Personal Information | Accessibility Statement
ThriftBooks® and the ThriftBooks® logo are registered trademarks of Thrift Books Global, LLC