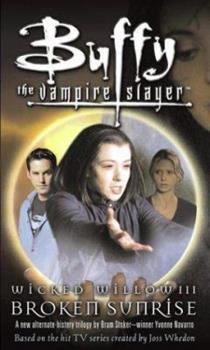 The Ghost of Tara has disappeared. At first Willow thought it was because of something she'd done -- or worse, that the universe was again conspiring to hurt her. But it's almost impossible to keep secrets from a witch, especially one as powerful as Willow, and ultimately she learns that Buffy and the gang are the culprits. Willow desperately wants Tara back. Not only does she miss her immensely, the spirit's presence is necessary to perform the resurrection...

Not the best, But certainly not the worst Buffy book

Published by Thriftbooks.com User , 16 years ago
Okay, now I am a huge fan of Buffy books (since the series ended I have to get my Buffy somehow) Before I bought the series, I read some of the reviews. Most of them were talking about how bad the book was, but I decided to give it a try. WARNING: Spoilers ahead! I'm going to start with the bad points: The charcters of Buffy, Willow, Xander, Ghost of Tara, and Dawn are not very well written. Part of why Buffy is so great is that the language is so well written, but these 5 are not the same. Another bad point is that Dark Willow doesn't seem as evil as she was in the end of season 6. She seemed pissed off at the world instead of wanting to destroy it. Also she needed to capture all these women to give her more power. It seemed she was pretty unstopable in the show. But in the book she seemed to need to drain these witches of power just to fight the Scoobies. Finally, and probably the worst part, is that she kept summoning Demons to fight the Scoobies instead of doing it herself. That was a big Disappiontment. But in light of all that, Here are the Many good parts: I love the fact that Willow was haunted by The ghost of Tara. It was smart of Yvonne to do that to help give Willow some guidance in her darkest days. Dispite the 5 badly written charcters, Giles is great in this book. You can really feel his sense of conflict when Willow breaks his back, putting him in a wheelchair. You can relate to him and it brough a sense of 'this is an alternate reality. Willow could actually kill them'. Anya and Dawn really shine in this book. If you're a fan of these 2, this book is deffinetly for you. Most people don't do much with Anya and Dawn because "they're just two human girls right?' WRONG You've got a 1120 year old Vegence Demon and a girl that hold the Key to destroying the universe in her blood. Yvonne really bring the two of them into the mix and has them fight alongside Buffy, Xander, and later Giles when he regains use of his legs. (I was very happy because I love Anya!) Overall, the good outwieghts the bad. This trilogy is worth the buy If you love DarkWillow, Anya, Dawn, and Giles. If you don't like it at first, just give it some time. By the end you will be glad you bought it.

Published by Thriftbooks.com User , 17 years ago
While I haven't finished reading the third installment of the Wicked Willow trilogy let me just say that I have read other books by Yvonne Navarro and for those of you who have trashed her Btvs Wicked Willow trilogy let me just say...."Back the heck off!!!!" This women is a fantastic writer and her trilogy so far has kept me up well into the early morning hours. It is an alternate universe story that is absolutely what I was looking for. Some say that if you want a real good alternate universe story to check the fan fiction websites. Well I have read some of them and don't get me started about how horrible some of them are. Navarro haters should really check out a couple of her earlier books. The two that come to mind are Afterage and Deadrush. Both are excellent. This is my first review and it probably isn't like the normal reviews but I just had to defend what is probably one of the best authors around. Keep up the good work Yvonne. The Wicked Willow Trilogy is awesome so far and I hope to see a second book regarding Afterage real soon. I am and always will be a Navarro fan till the end!

I thought it was a good book to read

Published by Thriftbooks.com User , 17 years ago
I liked it though I do not think that every one will I have read a lot better I just hope they continue to publish BVtS books they are the very good and now since the show has gone into tv history they are the only way to get a fresh Buffy.

Published by Thriftbooks.com User , 17 years ago
Broken Sunrise was the last and BEST book of the Wicked Willow trilogy. Book 2 blew me away but book 3 left me speechless. What made this book better than the others? The Gnarl. Yvonne's use one of the Buffyverse's best and utterly creepy of monsters sent chills down my spine as I was reading (in daylight no less!). Each page had such great detail and suspense that you were left wanting more after every chapter. Willow has always been my favorite of characters and her "gone bad" attitude in this novel never let me down. The author did a great job in showing that even the brightest and shiniest of people can have a darkside and when triggered, in this case getting back the love of her life, Tara, nothing can take away the pain. You just have to deal. I loved this book and whether you are fan of Buffy the Vampire Slayer or not I highly recommend this book for a great, spine chilling read. Be careful, though. You may want to keep a lookout for a Gnarl!!! Sean

Published by Thriftbooks.com User , 17 years ago
Broken Sunrise wraps up the Wicked Willow trilogy. Clearly, most reviewers did not enjoy the series. But I'm going to disagree. Unfortunately, to make the point, this review includes some spoilers. So don't read it if you want to be surprised by hwo the story ends. The premise of the Wicked Willow trilogy is that Willow went bad at the end of season six, really bad. But she didn't try to end the world. She focused her energy on bringing Tara back into the world instead. The god of death, Osiris, told her that it could not be done, but she wouldn't take no for an answer. She set off to gather the power to bring Tara back. And she would let nothing stand in her way. In the first two books, Willow tries to gather power, something that nearly kills Buffy and Anya. Then she tries to kill Buffy and the rest of the Scoobies. Both backfire on her. She's furious. And then Giles steals the Ghost of Tara from her. Once that happens, her anger is off the charts. Broken Sunrise is all about Wicked Willow and her personal journey. The fact that the series is called Wicked Willow and not Evil Willow is important. Willow never becomes truly evil. She's angry, hurt and misguided. And in Wicked Willow we get to experience all the angst with her. This is, as I said in my review of Shattered Twilight, a character study with some action and adventure thrown in, rather than the opposite. In Broken Sunrise, what is left of Willow's life falls apart. Her coven still has doubts about her, questions are being asked about the missing members of her coven and her former friends have stolen the ghost of Tara from her. Willow's anger escalates and she attacks the Scoobies yet again. Unfortunately this time she succeeds. And, as three Scoobies lie in the hospital near death, Willow must make a choice. Does she save her former friends or let them die? Throughout this book, Willow wrestles with her pain and anger and, ultimately, her goodness. And that is really what Wicked Willow is about, that Willow's pain drove her to do some terrible things, but Willow is still Willow and there are limits to the horrors she will commit. She still has a conscience and a soul. If you're read any of the other reviews you know that the ending of the book returns the story arc to the Buffyverse. And, if you're paying attention, you'll also realize that the Gnarls are the same demons who capture Willow upon her return to Sunnydale (when she is invisible to her friends) in Season 7. While there may have been more satisfying endings for some readers, I believe that this ending made the point. Willow could never be truly evil. That wouldn't just be an alternate story, it would be an alternate reality and no one said this story took place in an alternate reality. This story is simply a continuation of Willow's time as dark Willow. Willow is still Willow. Keep that in mind and you may find the story more satisfying. And, if you truly want an alternate reality,
Copyright © 2020 Thriftbooks.com Terms of Use | Privacy Policy | Do Not Sell My Personal Information | Accessibility Statement
ThriftBooks® and the ThriftBooks® logo are registered trademarks of Thrift Books Global, LLC