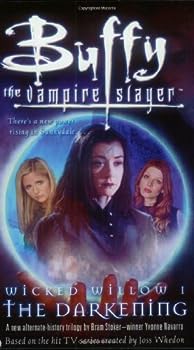 Wicked Willow I: The Darkening (Buffy the Vampire Slayer)

This description may be from another edition of this product. Buffy and Xander arrive too late to stop Willow from taking revenge on Warren for the murder of Tara, and now they stand helpless as Willow determines to use whatever magick it takes to bring her...

Published by Thriftbooks.com User , 17 years ago
It is difficult to believe that this one time socially challenged underdog has become one helluva wicked wicka. But that is what we get here. Having seen the episode on TV, I was able to picture her every move. Even more so, Navarro depicts a Willow mindset that we only saw physically on TV. This is a must have for any Buffy fan. Go Scoobies.

Published by Thriftbooks.com User , 17 years ago
Right on, evil Willow! What a story... I have many of the Buffy books and this one may be my favorite. As an avid fan of both the Buffy TV series and the Buffy books, I have been waiting for a female foe to definitively defeat Buffy in a fight and witchy Willow has done it! She is more powerful than Faith or Glory! Actually, their battle is not much of a fight. Willow beats her so bad that it makes blond Buffy look like a cupcake! The ONLY thing that stops Willow from finishing Buffy off is a ghostly intervention at the last second. This book is very special!

This is a good book

Published by Thriftbooks.com User , 17 years ago
While I liked it enough to give it five stars you have to seperate the show from the book a little while reading it if you can do that you will like this book

Published by Thriftbooks.com User , 17 years ago
What if Willow didn't return to being a good witch? What if, after stealing all of Giles' power Willow didn't respond to the pain of the world, and didn't decide to destroy the earth? What if, instead, she became so fixated on bringing Tara back the nothing else mattered? What if she really, really liked being a dark witch? One thing is certain, the Scooby Gang would be in a world of hurt.These are Yvonne Navarro's assumptions in her new alternate history trilogy about the Buffyverse. Despite Buffy's best efforts and being haunted by Tara, Willow is intent on draining the world of enough power to defy the rules and return Tara to life. Never mind that Tara doesn't want to come back, never mind the folks who used to be her friends. Wiillow is going to have her way.The first part of the darkening rehashes episodes 20 thru 22 of Buffy The Vampire Slayer right up to the confrontation in the Magic Box. Then, where the original Willow heads for the temple on the bluff, this Willow sets up a luxury pad in a warehouse and assembles a coven to help her work the dark arts. Throw in a few surprising pets and an extremely bad attitude and trouble, thy name is Willow.For those of us bloodthirsty types Willow never really got a fair shake when Tara died. Her friends barely noticed Tara's death, and then are so concerned about Willow's eternal soul that they never quite got the idea that Willow was in an excruciating amount of personal pain. If Zander had not finally realized that he had to get through to Willow the person the world would have cooked. This time that isn't an option.This is the first volume of a trilogy, and Navarro leaves us with no hint about whether there is a path to redemption for Willow. Now her only connection to her humanity is the ghost of Tara and that is tenuous at best. Much hangs in the balance, and Navarro has certainly got my attention for the duration.

A captivating look at the world of Evil Willow

Published by Thriftbooks.com User , 17 years ago
I've read most of the Buffy books. I'm big fan of the show and got hooked on the books early on. I have to say that this is one of the best of series.Imagine if Giles, Xander and the gang hadn't been able to turn Willow back to good. Imagine a world where Willow is the new 'big bad' in Sunnydale. Imagine that Buffy's next mission is to stop her best friend. Having seen Willow go so far down the evil road during the season six finale, its not hard to imagine. And, Yvonne Navarro does a brilliant job of bringing that possible world to life.The Darkening tells the story of Willow's grief. She turns her back on her friends and desperately tries to both make those responsible (in her mind) pay for her loss of Tara and to bring Tara back.The Darkening captures the motivations and behaviours of the characters perfectly -- from Willow's grief and angst over her loss of Tara to Anya's pointed truth-telling. We get an incredible look into the world that might have been. The Darkening is a 'must read' for any Buffy fan.
Copyright © 2020 Thriftbooks.com Terms of Use | Privacy Policy | Do Not Sell My Personal Information | Accessibility Statement
ThriftBooks® and the ThriftBooks® logo are registered trademarks of Thrift Books Global, LLC