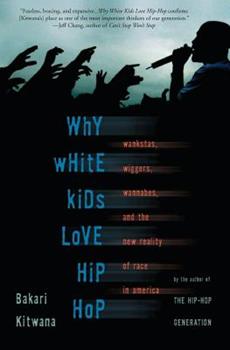 Our national conversation about race is ludicrously out-of-date. Hip-hop is the key to understanding how things are changing. In a provocative book that will appeal to hip-hoppers both black and white and their parents, Bakari Kitwana deftly teases apart the culture of hip-hop to illuminate how race is being lived by young Americans. This topic is ripe, but untried, and Kitwana poses and answers a plethora of questions: Does hip-hop belong to black...

Published by Thriftbooks.com User , 13 years ago
This book offers a non-academic analysis of hip hop and why white kids love all aspects of hip hop culture. The book also uses hip hop as a lens to examine race relations in the US. This is not a dry, academic read, and it is well-researched without listing the litany of facts. The book is written for a lay audience. Parents might find this useful to get a "handle" on their kids' fascination w/ hip hop culture. The audience for this book is a wide lay audience. It's an engaging read and most will read it quickly. The author's section on Wiggas/Wanstas was the most compelling to me. The author did a great job of exploring how people (whites) might feel powerless in their own lives based on issues of class or just being angry about their situation and how hip hop music might speak to them, might take them to a different place. I appreciated the tone and the writing style. This a book worth reading.

response to lack of culture

Published by Thriftbooks.com User , 15 years ago
You're an idiot. It would literally take me 3 days to write about how wrong you are. So instead I'll paraphrase for your simple, narrow mind. To say that hip hop is all about blaming whitey over a congo beat might be the most ignorant thing I have ever heard. HIP HOP is a culture, RAP is a genre of music. You are referring to RAP, not hip hop. But even then, not all RAP is what you are describing. Also, if it was, what is wrong with blaming Whitey? You mean to tell me that artists shouldn't use music as a medium to spread a message? Was N.W.A wrong for telling the world about the aubsive LAPD in the late 80's/early 90's? Any way, I doubt you actually read the book, and if you did, your mind obviously is incapable of accepting black people outside of some bubble you have put them in. Grow up, wise up and get a clue. You're an idiot.

An Original Look at Hip-Hop and Whiteness

Published by Thriftbooks.com User , 16 years ago
Why White Kids Love Hip Hop by Bakari Kitwana is a very well-written book which discusses why white kids, even upper-middle class and upper-class ones, love hip hop, specifically its musical component. I believe Bakari Kitwana puts a completely new spin on this question due to his clear enjoyment and understanding of hip-hop. He is able to look at hip-hop with less prejudice than many authors who have attempted to tackle this question. Kitwana uses convincing reasoning, such as whites' decreasing sense of racial privilege, and strong opinions to advance his arguments on why white kids love hip-hop. I recommend this eloquent book to any hip-hop enthusiasts especially those interested in the question "why do white kids love hip-hop?" Not to say that this book is by any means perfect, Kitwana has his own unique set of prejudices like anyone and he has a tendency to belittle the work of some less hardcore hip-hop fans. Overall it is a wonderful book, a true must-read in my opinion. This is an adult book but it is not terribly long or difficult to read and while it does feature some necessary racial epithets it doesn't uselessly throw around foul language. A great book for the avid hip-hop listener or anyone who has ever wondered just why white kids love hip-hop.

Published by Thriftbooks.com User , 16 years ago
Finally, someone with the foresight to write a book about White kids and hip-hop! Kitwana has written the definitive book, a groundbreaking work that critically examines the politics, placement, and myths regarding the place of White kids in hip-hop. An important point Kitwana makes in Why White Kids Love Hip Hip is that the national conversation about race is ludicrously out of date. Bakari Kitwana deftly teases apart the culture of hip hop to illuminate how race is being lived by young Americans and how media manipulates perceptions such that a predominately Black and Latino cultural production can be mistakenly perceived as something consumed predominately by Whites. He effectively derails the Sound Scan train that created the White kid myth in the first place to ferret out an attempt to "erase" Blackness from hip-hop. This topic is ripe, but untried, and there is a plethora of questions that he is the first to articulate. In the book he maps out that hip hop does indeed still belong to black kids, but has gained a wide appeal among white youth, many on a surface level (he also includes Black youth in this new generation as well). Kitwana also does a wonderful job of plotting out how mass media and consumer culture have made hip hop a unique phenomenon. This is a groundbreaking book, the first of its kind that studies White youth who are drawn to African American cultural productions-hip-hop. Kitwana has written a book that anyone interested in American cultural studies or hip hop must read because he examines old racial politics and through the voices of White youth suggests that with the help of hip-hop the new racial politics look promising. Dr. T. Lewis Dept. of English Willamette University
Copyright © 2020 Thriftbooks.com Terms of Use | Privacy Policy | Do Not Sell My Personal Information | Accessibility Statement
ThriftBooks® and the ThriftBooks® logo are registered trademarks of Thrift Books Global, LLC