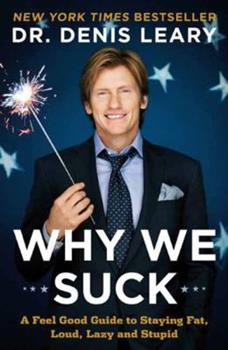 Why We Suck: A Feel Good Guide to Staying Fat, Loud, Lazy and Stupid

The New York Times bestseller One of America's most original and biting comic satirists, Denis Leary takes on all the poseurs, politicians, and pop culture icons who have sucked in public for far too long. Sparing no one, Leary zeroes in on the ridiculous wherever he finds it--his Irish Catholic upbringing, the folly of celebrity, the pressures of family life, and the great hypocrisy of politics--with the same bright, savage, and profane insight he...

Published by john c , 2 years ago
Just not well written or interesting or funny--couldn't make it through the first three chapters

Published by Thriftbooks.com User , 13 years ago
"Dr." Denis Leary explains it all --- literally. (Leary earned an honorary doctorate in 2005 from his alma mater, Emerson College, and he intends to use it.) For the Boston-bred comedian, there are no sacred cows, no taboos, no subjects off limits --- the Catholic Church, celebrities, politicians, even his Irish lineage. No one is safe from ridicule, and when Leary takes aim with his razor-sharp wit, he takes no prisoners. When first published in November, WHY WE SUCK and its author courted controversy concerning his statements on afflictions like childhood autism, especially when he says: "There is a huge boom in autism right now because inattentive mothers and competitive dads want an explanation for why their dumbass kids can't compete academically so they throw money into the happy laps of shrinks and psychotherapists to get back diagnoses that help explain away the deficiencies of their junior morons. I don't give a **** what these crackerjack whackjobs tell you --- your kid is NOT autistic. He's just stupid. Or lazy. Or both." This hardly seems like the diagnosis of a doctor, but as Leary clearly states in his lengthy prologue, "This is a comedy book. Which means it's meant to be funny. So when I say something in here I am offering up my opinion, my slightly exaggerated take on people, places and things and very often a twisted take on reality. In other words: it is parody, satire and poking fun." So I guess the offended parties skipped right over the prologue to get to the offending chapter. Leary has been a comedian/actor for over 20 years. He created and stars in the popular F/X series "Rescue Me," which is about to begin its fifth season. But even in his earliest stand-up days, he wasn't a stranger to controversy. His first comedy special, "No Cure for Cancer," and his quick MTV commercial spots touting his love of supermodel Cindy Crawford launched him into Hollywood, with more specials ("Lock 'N Load") and even movies (The Ref, Wag the Dog). But now he's in charge of his own show, and we get the feeling that's just the way he likes it. WHY WE SUCK reflects his own sardonic and incensed viewpoint on America's celebrity-obsessed culture and why people like Anna Nicole Smith should serve as a cautionary tale ("...she serves up a great argument against taking strippers out of the strip club....it's like taking King Kong off the jungle island and dropping him into the middle of midtown Manhattan --- nothing good can come from it."). He also rails against President Bush, whom he refers to as "Bush Jr." and advocates taking bratty teens who appear on the show "My Super Sweet 16" and dropping them chuteless into Iraq. Sure, he exaggerates and embellishes a bit, but some of his points make sense. No wonder our reputation has been less than sterling in the global arena. We live in a culture where a person will sue McDonald's if they get fat from eating their grease-laden food. What really irks Leary is that the notion of personal responsibi

Published by Thriftbooks.com User , 13 years ago
I received "Why We Suck" as a gift on the same day that shoppers killed a man trampling him while lined up for "Holiday Shopping" at Walmart and realized this is WHY WE SUCK. Happily, the book is funny and fun to read. Sadly, it is a true commentary about our lives. From CelebuTards to Dr Full to Mr Leary's idea of justice for Michael Vick, the book is astounding in it's genuine insights into WHY WE TRULY SUCK. Mr. Leary is a man with his eyes open and a mind that has not been brainwashed by the spin doctors and Dr Fulls of this world. If you read one book this year, Why We Suck should be the one.

Too bad money can't buy a sense of humor

Published by Thriftbooks.com User , 13 years ago
First off, this book is a riot from page one. I don't write reviews because I think everyone else out there does it better, but after reading the one star reviews on this book I had to chime in. Leary has a mean and angry style to his comedy. If you're easily offended, every other paragraph will get under your skin. This would not be the book for you. This would be a great book for anyone that does have a sense of humor and that can laugh at themselves without being offended. The one star reviews annoy me. I like hard rock and to me, those reviews come off as being the same as if I wrote a one star review of the latest blue grass album because it's not what I like. It would be a waste of my time and the reader's time. In the Prologue, Leary comes out saying that this is a comedy book. It is a parody, satire and poking fun. His exaggerated take on life. That's what all comedians do and Leary does it well. He also points out that there are endless things you can buy in America - but a sense of humor isn't one of them. Well put.

Published by Thriftbooks.com User , 13 years ago
Hilarious. The kind of biting comedy that could only come from Denis Leary. The book tackles some of the most absurd things about our culture in a very funny and un-PC way. I would definitely recommend this book.
Copyright © 2022 Thriftbooks.com Terms of Use | Privacy Policy | Do Not Sell My Personal Information | Accessibility Statement
ThriftBooks® and the ThriftBooks® logo are registered trademarks of Thrift Books Global, LLC