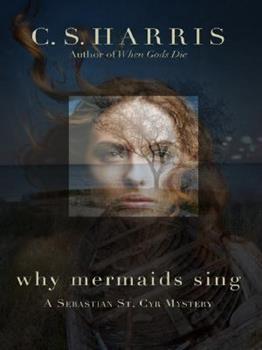 This description may be from another edition of this product. Murder has jarred London's elite. The sons of prominent families have been found at dawn in public places, partially butchered, with strange objects stuffed in their mouths. Once again, the local...

Published by Thriftbooks.com User , 13 years ago
I enjoyed the first two books in this series and found this one even better than the others. (It's not necessary to read them in order, although it can help with some background elements.) Sebastian St. Cyr, Lord Devlin, already weary from recent experiences with death and secrets in his past, as well as seeing action as a soldier, is asked by his friend, a magistrate, to aid in what looks like a series of shocking murder-mutilations involving a banker's son and now the son of a lord. When someone threatens him in order to stop him from asking questions, Devlin digs in, determined to solve the mystery and stop the killer. Woven deftly into the hunt for the killer is Devlin's personal life. In a lighter vein of this relatively grim tale, there is his need for a valet who will understand the ungentlemanly pursuit of murderers and the occasional need for suits of ordinary clothes that will let Devlin move through parts of society closed to the aristocracy. There is also the complications involved in his steadfast love of Kat Boleyn, an actress who refuses to marry him because it would ruin his position in society--and because of her secret past as a spy for the French, something that has been found out by the wrong people who are putting pressure on her. And there is Devlin's uneasy relationship with his father. These elements never stall the pace of the mystery. Devlin is relentless in his pursuit of answers. The mystery is nicely complex, involving an incident in the past and connections that are not immediately apparent. There is plenty of action, plots, intrigue, red-herrings, curious situations, broken taboos, deadly secrets and desperate moves. The historical details are also there, subtly in the background: the illegal boxing matches, the high society parties and husband-hunting, the press-gangs, the clubs, the gaming hells. The characters are all interesting and complex. The mystery and action good. The setting enjoyable. It is a perfect historical mystery, as far as I'm concerned. I hope there are many more to come in this series.

Great Mystery for a thriller fan!

Published by Thriftbooks.com User , 13 years ago
This one is a bit creepy and one heck of a good yarn. The story moves along both with the serial killings, the examinations, (CSI like, only ancient CSI methods), and St. Cyr's personal situations, all of which make for a highly suspenseful read. The period and place of the story is poignant in that you feel almost as if you're there, and at times you get a sense of uncommon fear. I loved this book and will most definitely read more of the St. Cyr mysteries. This one's worth the price for the hardback. Not to be missed!

Best of the Series

Published by Thriftbooks.com User , 13 years ago
I think the mystery involved in this book is the best of the 3 books so far. There is a surprise twist that is shocking and causes some dissapointment but also adds to the anticipation of the next book. I have enjoyed this series and this book the most.

Published by Thriftbooks.com User , 13 years ago
I've waited for book 3 of this really interesting series, and although it started a bit slowly, there were plenty of surprises and loose ends -- which means I'll be waiting for number 4. Viscount Devlin is a typical hero: strong, smart, good looking and sometimes wrong. His love for Kat Boleyn doesn't overwhelm the story but is deep and heartwarming. This particular book explores an unusual situation, one that has resonated in other historical lore, but not a commonly discussed one. Devlin unearths it and pursues answers with his usual tenacity. I like Devlin, I like Kat and there is more to their story waiting in the wings. Ms. Harris writes well, puts together a logical plot and develops characters I really like. What more could you ask for in a good historical?
Copyright © 2020 Thriftbooks.com Terms of Use | Privacy Policy | Do Not Sell My Personal Information | Accessibility Statement
ThriftBooks® and the ThriftBooks® logo are registered trademarks of Thrift Books Global, LLC