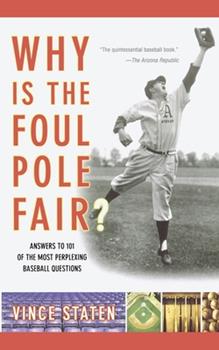 Why Is the Foul Pole Fair?: Answers to 101 of the Most Perplexing Baseball Questions

Chicken soup for the baseball lover's soul -- the inimitable Vince Staten takes you out to the ol' ballgame and answers all the baseball questions your dad hoped you wouldn't ask.

Published by Thriftbooks.com User , 13 years ago
I picked this book up at a clearance/used bookstore for $3. Having read it, I think I would've paid full price. (But don't tell the store owner.) At first blush, it looks like a book that would appeal to a baseball fan, like myself. And one would (somewhat, but not entirely) surmise that it is full of trivia. But this book is largely not about the game, but moreso about the things that surround the game. In the book, Staten chronicles a Reds game that he and his college-age son attended, but that game is mostly a framework around which the book is built. The book is mostly about the origins/evolution of everything around the game. Staten even spends 3 pages on the origin of the turn-stile (after noting his trip through one at the ballpark) -- and **makes it interesting!** I don't even particularly like history, and I still found this book fascinating. Staten covers the history of the tools of the game -- ball, bat, glove, uniform, catcher's equipment. He also describes the evolution of baseball cards, vendors (both stationary and those that roam the stands), and press coverage -- just to name a few of his topics. He even spends a bit of time on queueing theory, a passage the Reds may want to read, as they apparently do it wrong when you pick up tickets at will call. Several of the passages also recall the days of his youth -- either as he played the game or the pro stars that he admired. This part especially appealed to me, as one of many curmudgeons out there that feel that pro sports have changed a lot -- and not for the better -- "since I was a kid". Baseball fans and history buffs will definitely enjoy this book, but I think many others would, too. By the way, the answer to the titular question is found on page 223 -- the foul **pole** is on the foul **line**, which is actually **fair**. Why the foul line is fair is left as an exercise for the reader.

WHY IS THE FOUL POLE FAIR ?

Published by Thriftbooks.com User , 16 years ago
I got an "advance uncorrected reader's proof copy from Simon & Schuster" a couple summers ago. I chuckled all the way through. My 13 year old is now chuckling as he reads each chapter. Also he gets extra credit in LA/Lit class for finding typos, etc. We live reasonably close to Louisville , KY and try to see as many Bats' games as possible each summer. Even before Staten's chapter about how well Tom Nielsen keeps up the field,we were in love with Louisville Slugger Field. It's quaint ambiance is awesome. As a baseball parent I'm not quite the baseball buff that many of the parents and coaches are here in Elizabethtown KY,but I do have bragging rights regarding much fun minutia about the game that they can't possibly know. I've reread most chapters and will finish the others again this summer. Great primer !!!!!!!

An afternoon chat with a good friend

Published by Thriftbooks.com User , 17 years ago
I was expecting an exhaustive encyclopedia of baseball trivia. This book is not that! Instead, it's a meandering, enjoyable chat with a knowledgeable friend about baseball on a summer afternoon on the porch. Vince Staten frames his entire book around a big league game he attended with his grown son, but somehow every facet of that experience leads off on a tangent to a fascinating exploration of baseball stadium and game trivia from the ticket buying experience (which leads to essays on ticket printing and turnstiles), to telling his son about the time a shortstop lost a ball because it bounced off a pebble (which leads to an in-depth interview of a groundskeeper), to a certain snugness in the stadium seat (which leads to a well researched essay on studies through the decades of the width of the typical American backside). These essays have certainly made my baseball game experiences more enjoyable and given me a store of trivia to trot out at parties!

An Enjoyable Look At The Game Behind The Seams....er, Scenes

Published by Thriftbooks.com User , 19 years ago
This is another in Vince Staten's entertaining and informative books that focus on a slice of Americana--in this case, the grand American game of baseball. I've enjoyed all of Staten's books that I've read so far, this one more than some, I think because of the personal touch he brings to it. His own childhood memories of the game should strike a resonant chord with a couple of generations, and his visit to Riverfront Stadium with his son truly helps us see things from a fan's eye-view. If you've ever wondered what goes on in the press box, why there aren't more concession stands or the technical issues involved in maintaining an infield or manufacturing a ball, you should find this book enjoyable. Staten writing is relaxed, easygoing and liberally sprinkled with humor. A great bedtime read!

Published by Thriftbooks.com User , 19 years ago
This book was amazing. It didn't change my life, but it did change the way I will watch a baseball game. If you've ever wondered why the foul pole was fair, why box seats are called box seats, how the scoreboard came to be, what the definition of a hot dog is (It's not pretty.), the history of "Take Me Out to the Ballgame," or any number of other baseball things, this book is for you. The book starts out with the author's memories of playing baseball as a kid and going with his family to see his first Major League game at Cincinnati's Crosley Field. Fast forward to 2002 and the author is now going to a Reds game with his son. Each description of the game morphs into a small history lesson on everything from how the glove became standard in the game of baseball, how bats are made, the daily job of a baseball beat writer, how a groundskeeper takes care of the field, and many many more things. You'll find yourself nodding your head and thinking, "Yeah, I've always wondered about that!" For baseball fans, this book is a must read. For trivia fans, this book is a must read. This book truly enhanced my baseball experience and is something I plan to re-read from time to time.
Trustpilot
Copyright © 2022 Thriftbooks.com Terms of Use | Privacy Policy | Do Not Sell My Personal Information | Accessibility Statement
ThriftBooks® and the ThriftBooks® logo are registered trademarks of Thrift Books Global, LLC