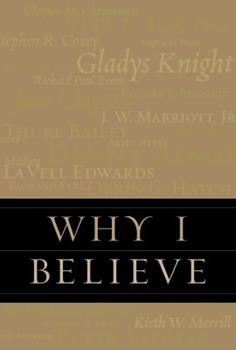 In a letter to members of the early Christian church, the Apostle Peter wrote, "Be ready always to give an answer to every man that asketh you a reason of the hope that is in you." In Why I Believe,... This description may be from another edition of this product.

Fresh examples of unedited witness to gospel based testimony

Published by Thriftbooks.com User , 4 years ago
Fresh witnesses from thought leaders as to how their life patterns speak for why integrating core gospel concepts generates fresh power to face career duties, daily. Take your red pencil with you to note what you need read twice. Benediction on Dr. Clark for this hardback book. Robert Austin/IDDOO GROUP, CHAIR, CEO

Published by Thriftbooks.com User , 14 years ago
Neat book! This is a compilation of the stories of conversion and testimony of many 'famous' individuals who are members of The Church of Jesus Christ of Latter-Day Saints. More than just for my interest, because the list of individuals covers a broad range of occupations and fame, the stories can be appreciated by members of my family, and friends, with similar and varied interests. Well packaged and quicky shipped!

Published by Thriftbooks.com User , 17 years ago
This great book lists the reasons behind the beliefs of over 50 different people. Their stories are as revealing and personal as any could ever be about private feelings of faith. At the end of each story, there is a brief description of the person who wrote it, their accomplishments and a photo. I find it refreshing that people of such stature in business, academics, sports, and other fields have spiritual feelings AND are courageous enough to allow them to be published. Many extremely successful people seem to think they are above others and have intellectualized spiritual feelings out of existence.

Published by Thriftbooks.com User , 20 years ago
Too often in the world of competing religions, we base our opinions of a particular religion on the observations of those outside that faith--kind of like asking someone who has never left the U.S. to comment on life in Germany. Why I Believe is a book written by Latter-day Saint believers about their own personal religious experiences. Some of the 59 authors--Gladys Knight, Steve Young, Bill Marriott, Steven Covey, Mitt Romney, Orrin Hatch, for example--are well known outside Mormon circles. Others less so. But each has achieved a level of excellence in his/her chosen field. As is stated in the introduction, "In an age of reticence about religion in which many communicate through bumper stickers and stereotypes, the openness of these writers, who are not merely 'passive believers,' shows they are 'not ashamed of the gospel of Christ'(Romans 1:16). Yet, though high achievers, the writers do not seek to draw attention to themselves but rather to the 'whys' of their testimonies."The Church of Jesus of Latter-day Saints has more than 11 million members in 162 countries. Its growth constitutes what one non-Mormon scholar says is "the birth of a new world religion" (see Rodney Stark, review of Religious Research, September 1984, v.26, no.. 1, page 7).
Trustpilot
Copyright © 2022 Thriftbooks.com Terms of Use | Privacy Policy | Do Not Sell My Personal Information | Cookie Preferences | Accessibility Statement
ThriftBooks® and the ThriftBooks® logo are registered trademarks of Thrift Books Global, LLC