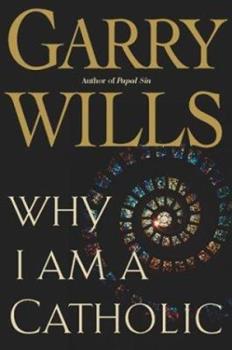 Why I Am a Catholic

PAPAL SIN and its expos? of a fundamental dishonesty at the heart of the papacy provoked both praise and heated debate. Accused by some of harboring deep resentments against the church, Wills counters with a powerful statement of his Catholic faith. Wills begins with a reflection on his early experience of that faith as a child, and later as a Jesuit seminarian, revealing the importance of Catholicism in his own life. He goes on to challenge, in clear...

Great overview history and the Papacy

Published by Thriftbooks.com User , 17 years ago
I loved this book! This is a great book if you are Catholic but cannot agree with the Party Line or if you want to discover why some Catholics are not as conservative as you may be. I read "Papal Sin" (Wills other famous book) and didn't appreciate the argument because the book didn't seem complete. It seemed to juxtapose the argument from a true historical perspective. As such, I put that book down thinking the book was interesting but I wasn't convinced. However, with this book I was thoroughly satisfied. The historical backdrop was so detailed that it left me wondering, "Why ARE you Catholic, Mr. Wills?". The answer comes with his discussion of the Creed - a must read. The only item I would disagree on is his interpretation of the Lord's Prayer. The author interprets the prayer through an End Times lens. While this may be true to certain clues in the Greek; I don't beleive it's true to the Prophetic spirit of Jesus when sharing the Prayer. The Prayer is a backdrop to our relationship with God the Father (read it in context of what comes before and after within the book of Matthew). As such, I beleive the spirit of the Prayer is timeless i.e. past, present and future. Despite my disagreement, Mr. Wills is far more educated and expresses his argument beautifully, so I humbly cannot take points off for his viewpoint.

Published by Thriftbooks.com User , 17 years ago
Like all of Wills' books, it's intelligent, well-written and engaging. It makes a good companion to his "Papal Sin" and--along with Hans Kung's "On Being A Christian"--it speaks in a truly "catholic" voice--based on the Gospels and not on 2 centuries of fallible human Church figures. Wills' takes his religion seriously--his books on St. Augustine are equally probing--and one gets a much clearer idea of Christian possibilities from his books than one gets from the gasbags spouting their faith on television or the know-it-alls who can only regurgitate the letter and not the spirit of their Faith. This book can instruct as well as comfort those who, like me, remain appalled at the generally low level of engaged intellectual thought about Catholicism.

Imperfect People carry the Message of a Loving God

Published by Thriftbooks.com User , 19 years ago
The essence of Gary Wills' book is that the Catholic Church is imperfect lead by imperfect people in an imperfect world . . . and yet, in spite of all the stupid and bad things the institution has done (the crusades, for example), the causes the leaders have lead (for centuries maintaining the sovereign nation of the Papal States), and the horrors the world has experienced that could have destroyed other churches, the Catholic Church with its pontiff has remained constant and worthy of the name of the Chair of Peter.Wills' book goes through the centuries of the Bishop of Rome, as it moved from the Apostle all the way to the current pope, and it can seem a bit long-winded. It did, I must say, spur me on to learn a lot more about the early Christian church, and I have gone on to learn a great deal more about how the early church decisions lead to important historical events like the great Schism of the 11th century. I am happy that Wills took the time to lay out the evolution of the Pope's position because it took me in places that I had never known about (like Pope Honorius who was declared a heretic by subsequent popes for naming someone else as a heretic earlier).It is through learning about the Church leaders, whether they be the popes or other leaders within the Church (and Wills loves Augustine!), that Wills accepts the divine inspiration of the Church (the entirety of the Church, not just the leadership) through the centuries. He then goes to the core prayers of inspiration--the Apostles' Creed and the Lord's Prayer--and explains how they have moved him to be a better man.A very good book.

And Why This is Important Reading

Published by Thriftbooks.com User , 20 years ago
Garry Wills is an eminent "popular" historian. His"Lincoln at Gettysburg" significantly altered my view of the Constitution, and the significance of the Civil War in defining who we are, today, as a nation. I also read his "Augustine." It was the first time I can recall reading about the philosophical pillars of the Church and actually understanding what I read.So, when I saw his two recent books on Catholicism, I was immediately interested. "Papal Sin" presents an historian's view (i.e., based on fact and analysis) of some of the major issues in the Church today (celibate priests, female ordinations, contraception, gays in the church and theirordination, papal infallibility, Vatican II, etc.). He does an outstanding job tracing the historical development of these concepts and events, and then (as the name of the book suggests) talks about the "structure of deceit" in place in the Vatican (read that to mean "the papacy") designed to hold the "party line", as opposed to searching for and speaking "the truth." This is an important book to read, especially for Catholics in the US today. But, it's not, by any means, exclusively for Catholics. I would say it's a "must read" for anyone interested in the history of Christianity, as well as anyone generally interested in understanding the conflict between and among the US Catholic layity, the US Catholic espiscopacy and the Vatican. Apparently, Dr. Wills received a great deal of criticism after "Papal Sin" was published, and, in partial response, he then followed up with "Why I am a Catholic." Unfortunately, there are so many who believe one cannot criticize the CatholicChurch -- it's all or nothing -- and still be a "good" Catholic. This is also a fascinating book. It traces the history of the papacy as the "guiding force", for better or for worse (and, there's a great deal of the "for worse"!) in the Church and succinctly describes most of the major historical events (and fascinating people) that have influenced the development of what we know as Western Civilization over the last 2000 years. It's an outstanding book.

A Book of Hope

Published by Thriftbooks.com User , 20 years ago
Wills has written an essential book. It doesn't deal directly with the current Church scandals, but it's timely in that it gives us reason to hope for reform. Wills made a big splash criticizing the Church in his last book. He made it very clear how the Church fathers are more interested in protecting themselves than ministering to the faithful. One would have thought from that book that he was done with Catholicism, that he would turn his back on the Church. Here he shows why he hasn't run from his faith. The Church has incredible powers to regenerate itself in times of crisis. It can change, and still remain the Church.I have struggled with so many of these issues over my life. Repulsed by so much that is asserted under the banner of Catholicism, but also drawn over and over again back to its beauty and message of goodness. With this book I can begin to reconcile these inclinations. I don't think I'll ever throw myself wholeheartedly back into the Church (unless it truly changes), but I can with all my convicion say I am one of the faithful. I just wish those in the Church would heed Wills's message of reform. We would all of us--even non-Catholics--be better off.I highly recommend this important book. Thank you, Mr. Wills for being so brave and honest.
Trustpilot
Copyright © 2022 Thriftbooks.com Terms of Use | Privacy Policy | Do Not Sell My Personal Information | Cookie Preferences | Accessibility Statement
ThriftBooks® and the ThriftBooks® logo are registered trademarks of Thrift Books Global, LLC