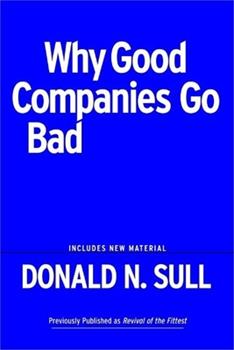 Why Good Companies Go Bad And How Great Managers Remake Them

This book shows how to keep your company from being blinded by its own success--and how to put a firm on the path to sustained greatness. Organisations must change to survive. But a blind commitment to success "formulas" that worked in the past often render companies unable to adapt when new competitive situations arise. This book spells out the common pitfalls that managers fall into, and outlines specific processes that managers can use to help...

Published by Thriftbooks.com User , 16 years ago
Donald Sull is Associate Professor of Management at London Business School. Leadership is about making commitments and seeing them through. There are two dangers with commitment making. The first danger is that the commitments fail. Sull argues that the second danger is that the commitment succeeds. A series of successful commitments can be bundled up in what Sull calls a company's success formula. In an every changing world, leaders must guard against being prisoners of their own success formulas. The most interesting part of this book is his creative pairing of similar companies in similar industries who took different paths of either honoring or destroying their success formulas. The stories of Firestone versus Goodyear in the tire industry have extraordinary value for us today and are well worth reading. What does this mean for those who serve on Boards of Directors? BOARDS WANT TO HIRE CHAMPIONS Boards want to hire champions. Champions are bred to be decisive and self-confident. They love making commitments and seeing them through. As Donald Sull argues, when champions make commitments you have a double edge problem. It is predictable that champions will have difficulty admitting that their commitments no longer fit the times. Indeed this trait is so predictable I called it the LBJ Effect in honor of the American President who escalated commitment to a failing war once it became clear that the war could not be won. LESSONS FOR REVIVAL OF THE FITTEST FOR BOARDS OF DIRECTORS. 1. Good CEOs are champions. Champions believe in themselves and their commitments. 2. In the absence of a strong countervailing force, some CEO Champions will rigidly hold on to what Sull calls the success formula when it ought to be thrown away. We even take the more extreme position that in the absence of a strong countervailing force, champions will pour more resources into an inappropriate success formula. 3. This strong countervailing force is called the Board of Directors. SETTING THE RIGHT CULTURAL TONE At a cultural level, the LBJ Effect can be fought by the board insisting on a culture where it is acceptable to fail, to learn from mistakes, and to try again. It is a culture where "mid course correction" is not necessarily a sin and "stick-to-itness" is not necessarily a virtue. Perhaps the most famous example of a corporate culture that supports this notion is Johnson & Johnson. On the desks of most executives within the J & J organization is a framed one-page document called, "Our Credo." The J & J Credo is a series of principles that govern management decisions: When there was a concern that a batch of Tylenol had been poisoned, a division manager unilaterally ordered all bottles of Tylenol off the U.S. market. That action was taken without consulting corporate headquarters. It was justified to management on the basis of the credo. Senior management at J & J backed the local manager and the employees we
Trustpilot
Copyright © 2022 Thriftbooks.com Terms of Use | Privacy Policy | Do Not Sell My Personal Information | Accessibility Statement
ThriftBooks® and the ThriftBooks® logo are registered trademarks of Thrift Books Global, LLC