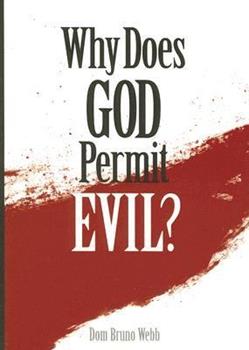 Why Does God Permit Evil

Hatred, murder, terrorism, and war spring from the sins of men. But why does God let innocent children suffer from the effects of these evils? Why does He let earthquakes devastate cities, despair... This description may be from another edition of this product.

The religious answer to suffering

Published by Thriftbooks.com User , 13 years ago
Everyone on earth has been touched by the problem of suffering. At times suffering can overwhelm all other issues, wrenching a cry to God from the heart. Here is a book to answer the problem of suffering from a religious viewpoint. Eastern religions and ancient philosophies, such as the Stoics, all tended to respond by escape. Endure, ignore, do not care, seek unconsciousness of the mind. "The attitude of pagan philosophy is, then, firstly, that suffering, not sin, is the supreme evil. And, secondly, that the only means of suffering is escape" (p 14). Judaism and Christianity, however, proclaim am immortal, eternal God who created all things. But does he will all things? We live in a world darkened by the fall of the first man, where "there is a deep-set disorder in the heart of nature resulting from this action " (p 50). O felix culpa, oh happy fault of Adam, who created that fall--this was the insight of the church fathers. For Christ came down to merit the graces that we, in our fallen state, could not, and open the gates of heaven. And to gain us a chance at such gifts that we would never have attained otherwise. "In itself suffering is indifferent either to moral good or moral evil" (p117). There were two thieves who suffered crucifixion with Christ. One made use of it; one did not. The secret is in seeking the will of God, whatever happens. A book to ponder.
Trustpilot
Copyright © 2022 Thriftbooks.com Terms of Use | Privacy Policy | Do Not Sell My Personal Information | Accessibility Statement
ThriftBooks® and the ThriftBooks® logo are registered trademarks of Thrift Books Global, LLC