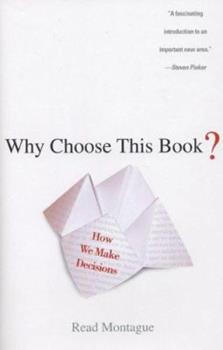 Why Choose This Book?: How We Make Decisions

A director in theoretical neuroscience introduces readers to the latest findings in the science of decision-making, offering an accessible discussion of the origins of aesthetic choices, ethical behavior, financial decisions, and more, in an account that also connects behavioral science to mental illness and addiction.

Deep information on the working of the brain

Published by Thriftbooks.com User , 14 years ago
This indepth study of how the brain works is written so that the average person can understand it. Dr. Montague is an amazing author to be so knowledgeable and able to bring the information down to easily understood language. Everyone should read this.

how mind evolves with interactions.

Published by Thriftbooks.com User , 14 years ago
In a mostly engaging technical look at the decision making mechanisms within the human mind and its evolution, Montague explores what the characteristics of an efficient computational machine are, primarily within the confines of Turing's 'philosophy'. Specifically, the book explains the how mind evolves through interactions and the notions of how we frame the value of choices available to us and how we assign costs to these choices. Covering disparate topics such as computational theory of mind, neuromodulatory systems, dopamine delivery, Redish's model, etc., the author paints a detailed picture of the various critical research directions that have enables us to understand the functioning of the human mind. The book is not an easy-read in terms of the depth of the material covered (no reputable author would try to dumb this material down to a Cliff's note version). The discussion is mostly engaging, though sometimes, the topics change quite abruptly. The chapters do not necessarily seem to be seamlessly transitioned, and it would have served the reader, if the author summarized the main observations more clearly in each chapter. Despite these minor irritations, the book is a treasure trove for anyone interested in this field, though may not be sufficient for a serious student in this field. The end notes are well organized and detailed. An excellent read for a patient, curious reader. 4.5 stars

neuroscience plus a lot more

Published by Thriftbooks.com User , 14 years ago
This is an excellent account of various closely related concepts in modern computational neuroscience, communicating to non-mathematical readers key theories such as predictive error signals and the dopamine system, temporal difference theory, cognitive control, neuroeconomics etc, testable in humans using behavioural and neuroimaging methods. As a philosopher observed, this approach hog-ties old philosophical dogmas. Indeed its a valuable antidote to philosophy, and unlike millennia of philosophical effort (including Satre), this approach is making very active progress. Highly recommended.

A journey into neuroscience and the mind of a neuroscientists

Published by Thriftbooks.com User , 15 years ago
This book covers, and connects, insights from computer science, physics, evolutionary psychology and biology, psychology, economics, and of course neuroscience. In addition to the particular insights from the different fields, the connections Montague draws between them help us understand what the brain attempts to achieve and how it goes about doing so (taking us with him). The last part of the book describes in more detail a few amazing fMRI experiments, what was learned from them, and their larger implications. This is not a particularly easy read because it is not repartitions, and it covers a lot of ground, ideas, and findings. But, it is defiantly a fascinating window into this new domain of science.

Published by Thriftbooks.com User , 15 years ago
Some books are important for the discussions they start. Although probably Montague himself would admit that many of his insights appeared in earlier (and maybe even better) works, what is novel here is a popularized work that seriously discusses human consciousness in connection with Turing reasoning. For those not up on their Allan Turing, he was one of the Betchly Park genuises who helped the allies beat the Germans by decoding enigma during World War II. When not decoding enigma, Turing (himself an enigma) devoted attention to the nature of human imagination and cognition. And according to Turing, the solution for the problem dogging centuries of philosophers was easy. Decision making ultimately could be resolved as the discrete repetitive choice of one option over another. To take a somewhat easy example, let's solve 1 minus 0. First you take a one then you remove zero from it and you get a solution. Turing reasoned that using something called Boolian algebra that the one and the zero could be rendered as binary choices and thereby made part of a larger algorithm for problem solving. What Montague does in his book is to marry Turing decision making with human emotion to add an additional ingredient to all human decisions...that is, an emotional component which explains our (all too often) propensities toward illogic. In this way (and this is the significant thing Montague does), Montague convincingly makes the argument that though emotionally grounded, human decision making remains nonetheless binary and therefore subject to algorithmic tracking.
Copyright © 2020 Thriftbooks.com Terms of Use | Privacy Policy | Do Not Sell My Personal Information | Accessibility Statement
ThriftBooks® and the ThriftBooks® logo are registered trademarks of Thrift Books Global, LLC