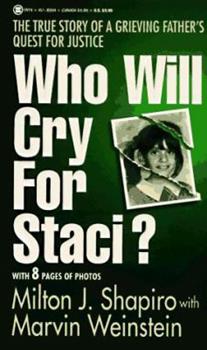 Who Will Cry for Staci?: The True Story of a Grieving Father's Quest for Justice

After Marvin Weinstein's daughter was murdered, it would take 15 agonizing months of investigation before the two men responsible were arrested. Due to plea bargains, one of the murderers faced only seven years in prison and is now a free man. The other is currently serving a life sentence in a Florida prison. This is the tragic story. Photo insert.

Published by Thriftbooks.com User , 16 years ago
I read this book and was very interested in the story. Unfortunatley I came away felling very sad and empty because the crime was commited in 82 and the book was written in 95 and one of the killers had been out for a few years already. BY 1995!! This book is an excellent read for those interested in this subject and I looked for a site for Marvin to tell him how much I support him and what he does for others, and I am sorry the system failed him and Staci, and Hilari.

Something is NOT right here!!

Published by Thriftbooks.com User , 18 years ago
I have read this book 3 times trying to figure out why I am so confused. John Pierson had a background where he raped and licked and tried to suffocate his girlfriend right about the time he did those things to Staci Weinstein. His blood was found in her bed and on her under pants. He had a history, which several people atested too, that when he became excited or violent his nose bled. Eddie Wasko, on the other hand... was never accused of rape, being violent in any way...and not one bit of physical evidence of his was found at the Weinstein home. There was nothing to prove he was there with the exception of a statement that he gave after being interrogated for close to 30 hours without food or much sleep. And let's not forget the Eddie Wasko passed a polygraph test at the point he was questioned the first time. I am also confused at the fact that this Judge Snyder would not allow John Pierson's girlfriend, Janice Langhorn, to testify that John had raped her, licked her all over and tried to suffocate her while becoming extremely violent because she didn't want to have sex with him....That is just what happened to Staci....So why was she not allowed to testify to that to show that John Pierson is a maniac and HIM and only HIM killed poor little Staci Weinstein??? If I had some type of Law degree I would go through this case with a fine tooth comb because everything is showing the the guy who actually committed this murder...spent only 7 years in jail for it and no sooner he was out he was sent right back in for rape...AGAIN!!! COME ON...people...Are we trying to clean up violence in our communities because we didn't in this situation, did we??? The other guy...is still to this day in prison. It's unfortunate that these things happen in our judicial system...but they do and SOMEONE needs to take a look at it case by case and put a stop to it!!!! My sympathies to Marvin and his family..and also to Eddie Wasko for believing in and listening to the corrupt investagators who were trying to get professional gain out of a vulnerable, niave man. Thank you!

Living with a murderer

Published by Thriftbooks.com User , 18 years ago
I was a teenager when my step brother killed Staci, My adopted Mother was married to his father and everyone knew that John had major problems. He shoved me in front of a bus in grade school which lead to my being hospitalized. He also tried to smother a girlfriend after she refused sex. He was paroled and soon was back in prison for attempted rape of a woman in central florida.He is now out and working for his younger brother Gene Pierson doing home repair in Florida. Again the system has failed us. My sympathy to Marvin for his loss.

Published by Thriftbooks.com User , 22 years ago
As someone who knows Marvin, this has been the hardest thing for him to go through. He is the sweetest and kindest man you will ever meet. This story just proves that bad things do happen to good people. Only a parent can truly understand what its like to lose your child. This book will help those who don't to understand what its like.
Trustpilot
Copyright © 2022 Thriftbooks.com Terms of Use | Privacy Policy | Do Not Sell or Share My Personal Information | Accessibility Statement
ThriftBooks® and the ThriftBooks® logo are registered trademarks of Thrift Books Global, LLC