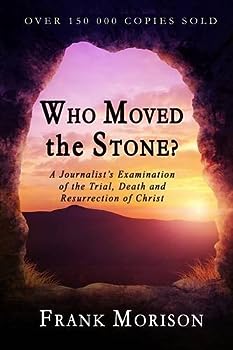 Who Moved the Stone?

"I owe Morison a great debt of gratitude. Who Moved the Stone? was an important early link in a long chain of evidence that God used to bring me into his kingdom. Morison's stirring intellectual... This description may be from another edition of this product.

Inspiring study of a discontinuity in human history

Published by Thriftbooks.com User , 18 years ago
Almost 2000 years ago, Jesus of Nazareth was executed by Roman and Jewish authorities in the most humiliating manner of the time. His followers, who thought he was the promised Messiah, fled to the countryside, disbanding in confusion and despair at the death of their teacher.Yet within weeks, they began to publicly and confidently advance ideas and practices radically at odds with centuries of Jewish culture and teaching, establishing the foundations of the Christian church. In the years to follow, all were tormented and killed for advancing these beliefs.What happened to trigger this change, to reconstitute and energize the ministry of Jesus, and subsequently change the world? People aren't willing to die for something if they know it to be a lie. The cause is given in the Bible; the physical resurrection of Jesus and subsequent interaction with not only his followers but hundreds of other witnesses on many occassions after an agonizing death on the cross."Who Moved the Stone" analyzes the events of the week leading up to the execution of Jesus and the discovery of his resurrection. Four somewhat different views are provided by the four Gospels and Morison shows how each contributes a piece to the interlocking puzzle of events, enhancing the coherence and credibility of the resurrection precisely because of the way they fit together (and sometimes seem not to). This is a stimulating, well-written book everyone should appreciate and read, since it illuminates the foundational event of modern civilization. The author offers interesting inferences regarding the arrest of and formulation of charges against Jesus based on Jewish law of the time, Biblical accounts, who was involved and how it relates to historical practices. One begins to appreciate subtleties of the situation.The book ended without addressing all questions people might have, such as seeming variations between the gospels regarding who was in the open tomb and when. A timeline that clearly harmonized all accounts (who was where when X happened, etc.) would have helped. However, Wenham's book "Easter Enigma" does this completely. William Lane Craig also has some good, if somewhat academic, analysis such as "The Son Rises" (which to me reads as being somewhat more "brittle"). All in all, this book is an excellent and persuasive argument for the Resurrection of Jesus.

Published by Thriftbooks.com User , 20 years ago
Verily verily, the Christian Bible is very clear on the foundational importance of the resurrection of Jesus Christ. Regardless of personal interpretation, Scriptures such as Romans 10:9 and 1 Corinthians 15:14 clearly state that for the believer, Jesus' resurrection from the dead must be regarded as a non-optional issue, and must be personally subscribed to doctrinally. Obviously, this can be an affront to the modern intellect and have the potential to collide with our reasoning faculties and idea of intelligence. In fact, that was exactly the case for English journalist Frank Morison when he began to write "Who Moved The Stone" over 70 years ago. As a skeptic, he set out to prove that the story of Christ's resurrection was only a fabricated myth... what he found, however, was a seamless validity in the biblical and extra-historical record.I call this book a "study". By that I mean that it is not a light read, and one ought to follow up on all Biblical references and make notes as one goes along. I filled up half a notebook with detailed timelines, summaries, and diagrams, with the end result being that my initial understanding of the resurrection was further strengthened in a way that is impossible to exaggerate. For me, one of the greatest testimonies to the FACT of the resurrection has always been that the authorities at the time did not dispel the "myth" by simply displaying the crucified body. In the early stages of the apostles' preaching, when the church was gaining converts left and right... all the authorities would've had to do was PRODUCE the body of Jesus! Why didn't they do it? Read Morison's book with even a half-open mind and I believe that you will finish it in agreement with me... that they DID not, because they COULD not.

Published by Thriftbooks.com User , 22 years ago
I've read many books on the historical reliability (and unreliability) of the New Testament; I've seen many educated opinions varying in every way; I done studies many resurrections-centered topics; but I've never seen a book quite like this! Morrison takes nothing for granted. He trusts his instincts, and, though coming shy of any kind of Biblical-Christian opinion, he beautifully defends the resurrection in this short examination. As a doubter I find it difficult to swallow what many Christians take for granted in their own faith. This book is not like most. However, as a believer I was thrown by Morrison into the last week of Jesus' life (and the following weeks) as I never have by any lecture or writing. Morrison brings to light many historical details missed my so many people (including myself). He is easy to read and difficult to put down.To the skeptics: I was once a skeptic. It was not a brief reading of one or two apologetic works that convinced me; instead, it was months and months of hard research, with this book as one of the many highlights. I encourage all to read this.Morrison's book will forever remain one of my personal favorites.Luke Gilkerson

Morison develops proofs for the Resurrection of Christ

Published by Thriftbooks.com User , 24 years ago
Although Frank Morison, an English journalist, had reverence for the person of Christ, he was skeptical of the historical authenticity of Christ's resurrection and set about to settle the matter. What followed amazed him as step by step he was drawn into the facts of the case. His explanation of the three-hour delay between the time Judas left the Supper and Christ's arrest in the Garden of Gethsemane is detailed and credible. Likewise his explanation for the hurried up trial, why nine of the disciples were not at the crucifiction, why Peter and John were, why Mary and Martha were not. It is riveting reading to find out why the tactless and brutal Pilate did not believe Jesus was guilty and washed his hands of it. What was Caiphas so worried about that he hurried everything up to be sure that Jesus would be crucified by sunset the following day? What were the roles of Joseph of Arimathea and Nicodemus in Jesus' last day. Morison covers the last seven days before the Crucifiction as well as the time immediately following. He asks the questions that the people living then would have asked and follows in their footsteps literally at times. Finding out who he thought moved the stone was the climax. A must read for any thoughtful person wishing to question further the Biblical accouint. Barbara Barfoot (gbarfoot@pe.net) Riverside, CA
Copyright © 2022 Thriftbooks.com Terms of Use | Privacy Policy | Do Not Sell My Personal Information | Accessibility Statement
ThriftBooks® and the ThriftBooks® logo are registered trademarks of Thrift Books Global, LLC