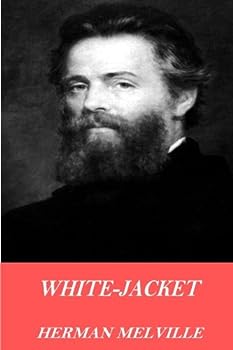 Herman Melville was one of the greatest American writers of the Renaissance period in the 19th century. Melville was a very influential writer in many genres of fiction, including sea stories, Allegory, and Gothic Romanticism. Melville's classic novel Moby-Dick remains one of the most widely read books in American literature with most students reading it by the time they graduate high school.White-Jacket, published in 1850, is an adventure novel based...

Blogging from atop the mainmast

Published by Thriftbooks.com User , 12 years ago
In this early title from the great Melville, we get an episodic account of the author's service aboard the USS United States, sister ship of "Old Ironsides." To avoid prosecution under the Articles of War, the name of the ship (called in the book the "Neversink") and his fellow crew members have been changed, but the stories retain their often startlingly candid detail. From the ritual floggings at the masthead to a critical grog shortage, Melville gives us a seaman's eye view of life of the 400-man crew of an American man-of-war marooned uncomfortably in a time of peace. Each chapter is a commentary on some facet of life aboard the ship. Some are laden with irony and dry humor, others express thinly veiled outrage at an institution that completely deprives men of any form of liberty and justice as they work to protect the freedom of their country. In these chapters, you will also see the seeds of the themes and images that appeared in Melville's later works. "A blog," you ask? That is exactly what this book is. There are many characters, no plot to speak of, but an incredibly rich garden of facts, opinions ideas and observations. It does little to flatter the U.S. Navy of the mid-1800's but provides a richly detailed and distinctly un-romanticized view of the lives of those who served. If you're a fan of Melville or just like books about sailing the seas, White Jacket is a must-read.

A guide book for sailors

Published by Thriftbooks.com User , 13 years ago
Reading this book made me realize how much I have in common with the sailors of old in our illustrious Navy. We all hate general quarters. This book is a good read for anyone looking for a more indepth look at what naval life was/is like. Underways are long, port visits are short ( and more restricted than ever), and you never feel at home no matter where you go. Naval life is great but it isn't a adventurous as some writers tend to make it appear. To have adventures you must go it alone or pick a liberty buddy with similar ideas.

Published by Thriftbooks.com User , 17 years ago
This book is second only to Moby-Dick in the list of Melville's greatest works. And Melville's greatest works are America's greatest works. White-Jacket has it all; humor, pathos, poetry and philosophy. This book makes me not only admire Melville the author but love Melville the man. To suggest that the book would be better off without its "sermons" against cruelty in the Man-of-War's world is to suggest that Melville should have written some other book. He didn't write that book, he wrote this one and this is the one he wanted us to read. God bless him.

Published by Thriftbooks.com User , 22 years ago
Fascinating, entertaining account of life on a man-of-war. Hilarious in parts; always subversive. Melville's mock glorification of the U.S. Navy and its officers is brilliant.

Published by Thriftbooks.com User , 22 years ago
This is the second of three books Melville published in quick succession--after Redburn in 1849, and before Moby-Dick in 1851. If you read them in that order, you can actually witness Melville's powers as an author growing. White-Jacket has passages that approach the difficulty of Moby-Dick, but it also has not a few chapters that will have you rolling on the floor with laughter. It's not the best of Melville, but it is certainly brilliant! (Smokers, and non-smokers alike, should take a look at ch.91)
Copyright © 2020 Thriftbooks.com Terms of Use | Privacy Policy | Do Not Sell My Personal Information | Accessibility Statement
ThriftBooks® and the ThriftBooks® logo are registered trademarks of Thrift Books Global, LLC