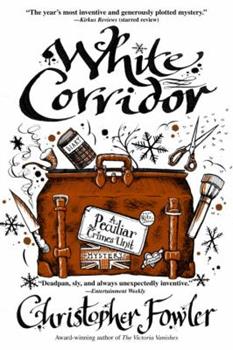 It's the classic locked-room mystery--a member of the Peculiar Crimes Unit killed inside a sealed morgue populated only by the dead and to which only four PCU members had a key. To make matters worse, the Unit has been shut down for a forced "vacation," and Bryant and May are stuck in a van in the Dartmoor countryside during a freak snowstorm. Now they'll have to crack the case by cell phone while trying to stop a second murder without freezing to...

Published by Thriftbooks.com User , 14 years ago
If Ken Bruen's east London crime novels featuring the brutal and boorish Inspector Brant are literature as rugby, then Christopher Fowler's mysteries of the aging Brant and May detective duo are symphonies. Both entertaining, but Bruen is jarring and violent where Fowler is refined, cultured, and subtle. Fowler writes the classic British mystery: dryly humorous, understated, unadorned, and intelligent. In this outing, inspectors Arthur Brant and John May, the irascible and unorthodox heads of London's Peculiar Crimes Division, find themselves stranded in a freak blizzard on the moors of southern England, leaving Sergeant Janice Longbright in charge to solve the ultimate "murder in the inside-locked room" mystery of the team's chief forensic scientist. Meanwhile, a serial killer is on the loose in the snowdrifts, keeping our discerning duo occupied between cell phone-assist calls to Longbright and her short-handed crew. But despite facing simultaneous murder investigations and answering some nagging questions about the apparent drug overdose death of a young woman whose body occupies the morgue, the real terror facing the PCU team is the looming stationhouse tour of an insufferable princess and PCU nemesis Oskar Kasavian, the London PD bureaucrat bent on shutting the renegade crime-solving unit down. Rich in allegory and clever forensics, contemporary crime fiction's most eccentric inspectors plough through deliciously convoluted threads of seemingly unrelated mysteries, taking a few keenly twisted turns before arriving at a clever and, at least for me, a totally unexpected climax. Brilliant character development and sharp, witty, dialogue add up for one of the year's most engaging and enjoyable crime novels. If you haven't met Brant and May yet, this is as good a place as any to start - and chances are you'll not remain a stranger.

I am a definite fan

Published by Thriftbooks.com User , 14 years ago
First Sentence: NOTICE: THE PECULIAR CRIMES UNIT WILL BE SHUT FOR ONE WEEK COMMENCING MONDAY 19th FEBRUARY While the Met's Peculiar Crimes Unit is closed down for repairs, Detectives Arthur Bryant and John May had off for an international convention of psychics. Caught in a blizzard and stuck in their van, they are tasked with solving two crimes. Back at the office, the retiring pathologist is found dead within his locked autopsy room. A woman, who escaped her abusive husband with her young son, now finds herself on the run from a man who admitted killing his mother. One of the things I love about this series is the creativeness of the plots, and there are so many elements I enjoyed in this book. First, I love the characters; the quirkiness of Bryant and the protectiveness of May. The sense of place was excellent; you felt them stuck in that blizzard and dreaded every time they had to get out of their van and into the cold. I appreciated their helping their colleagues solve the case back at headquarters and the approach that they wouldn't always be there to solve the cases. Fowler took what could have been a cliché story line of the woman running from a stalker and gave us something new with it. I am a definite fan and end each book eagerly awaiting the next.

Published by Thriftbooks.com User , 14 years ago
I am probably too old to be using the term "sense of wonder," but I will when discussing Christopher Fowler's Bryant & May mysteries. Arthur Bryant and John May are well past retirement age, yet somehow they continue working as senior detectives for London's Peculiar Crimes Unit. The eccentric Bryant and enigmatic May are perfectly and at once matched and mismatched, and the crimes that their creator invents for them and their similarly strange co-workers to solve are such clever variations on a theme that one is usually enthralled within just a few pages of the beginning of the book. WHITE CORRIDOR, the fifth installment in the Bryant & May series, differs somewhat from its predecessors in that the mysteries confronting the two protagonists are not linked to one of their cases from the past but rather are firmly grounded in the present. The circumstances surrounding the offices of the Peculiar Crimes Unit are chaotic, to say the least, what with the imminent retirement of Unit Pathologist Oswald Finch, an unexpected tour from visiting royalty (which is crafted to shut down the PCU forever) and the closing of headquarters for one week while its wiring is brought up to 21st-century standards. Bryant schedules a weekend frolic of his own --- all too typically a convention of psychics --- dragging an extremely reluctant May along with him. Naturally, everything that can go wrong does. A member of the PCU is found murdered in a locked room on-site, and at least one fellow member had motive and opportunity to commit the crime. Meanwhile, Bryant and May find themselves stuck in their van in the middle of a snowstorm in the Dartmouth countryside, even as a shadowy murderer prowls the landscape around them, wreaking terror on other trapped motorists. Bryant and May accordingly are challenged with double duty, attempting to solve one crime while tackling the other via cell phone, even as the PCU faces their gravest threat yet to being disbanded. Both plot- and character-driven, WHITE CORRIDOR demonstrates that Fowler has no intention of letting this imaginatively conceived and craftily written series succumb to formulaic familiarity. One never knows from page to page what Bryant will do or say. And May? Even as he plays foible to Bryant, it appears from hints dropped in the book that May has enough secrets to keep the series going for years. If you haven't jumped on the Bryant & May train yet, now is the time to familiarize yourself with a series that is on its way to becoming an institution. --- Reviewed by Joe Hartlaub

"They were able to occupy a unique place in the city's investigative system."

Published by Thriftbooks.com User , 15 years ago
Christopher Fowler's droll and original "White Corridor" brings back the London-based Peculiar Crimes Unit, "a highly unorthodox specialist police division" founded by the now elderly senior detectives Arthur Bryant and John May. Bryant, in particular, has attracted a great deal of attention (mostly negative) because of his reliance on psychics, necromancers, cryptozoologists, and alternative therapists to help him solve "impossible" crimes. The PCU tackles sensitive cases using out-of-the-box thinking; they work outside of the many constraints that shackle the regular members of the Metropolitan Police Force. Unfortunately, Bryant and May have made some powerful enemies, including Oskar Kasavian, the vindictive supervisor in charge of Internal Security. Kasavian is plotting to get rid of the PCU once and for all. Acting Unit Chief Raymond Land decides to declare a compulsory one week furlough for the PCU, ostensibly to upgrade the unit's computer system and to better organize its operations. In addition, the PCU's irascible pathologist, Oswald Finch, is about to retire; the thought of no longer hanging around his beloved mortuary throws Finch into a panic. He enjoys working with corpses; he has even begun to resemble them. Finch's probable successor, the Eton-educated Giles Kershaw, is looking forward to stepping into his mentor's shoes, but it turns out that Kershaw's appointment may not be a sure thing. During this time of transition, Bryant drags May off to a convention of psychics, leaving the unit under the leadership of the conscientious Detective Sergeant Janice Longbright. When Bryant and May get caught in a blizzard, they are stranded somewhere in the Dartmoor countryside. They are freezing and anxious, since the rescue services will not be able to reach them until the weather clears. Meanwhile, DS Longbright and her colleagues are called upon not only to solve a sensitive murder case, but also to man the barricades when a royal visitor is invited to Mornington Crescent. Nor do Bryant and May get a well-deserved break from crime-solving. Even during a violent snowstorm, they end up trailing a mysterious killer with shadowy motives. "White Corridor" is a sharply written, literate, and lively mystery. Fowler is a magnificent descriptive writer and his dialogue is brisk and dryly humorous. The story lines are complex and challenging enough to provide perfect fodder for the PCU. All of the characters are beautifully depicted: Bryant is one of the most amusing and unusual protagonists in contemporary British mysteries. He dresses in ridiculously out-of-date clothes, is on a first-name basis with a white witch, cultivates a sickly marijuana plant, plays sadistic practical jokes on his peers, disdains modern technology, and bickers endlessly with his frustrated but devoted housekeeper, Alma Sorrowbridge. However, he is also a brilliant detective, and in some ways, his mind works every bit as effectively as the most high-
Trustpilot
Copyright © 2022 Thriftbooks.com Terms of Use | Privacy Policy | Do Not Sell My Personal Information | Accessibility Statement
ThriftBooks® and the ThriftBooks® logo are registered trademarks of Thrift Books Global, LLC