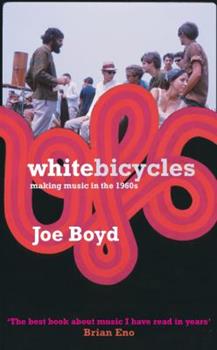 by Joe Boyd and Joe Boyd

"This is the best book about music I've read in years, and a gripping piece of social history."--Brian Eno When Muddy Waters came to London at the start of the 1960s, a kid from Boston called Joe Boyd was his tour manager; when Dylan went electric at the Newport Festival, Joe Boyd was plugging in his guitar; when the summer of love got going, Joe Boyd was running UFO, the coolest club in London; when a bunch of club regulars called Pink Floyd recorded...

Published by Thriftbooks.com User , 15 years ago
I bought this book for my husband, a musician, and he devoured it.

Published by Thriftbooks.com User , 15 years ago
This book is an interesting look into the swinging London of the 1960's from the viewpoint of an American looking to make a name for himself in the music biz. Like fellow American Shel Talmy Joe Boyd was involved in many of London's top bands by running the UFO club and producing the Pink Floyd's first single, producing and managing Fairport Convention and Nick Drake and capitalizing on the new interest in the British folk music scene. This book starts with Boyd's childhood and his experiences working for the Newport Folk Festival, Elektra records, and his own Witchseason Productions. It is very well written and it makes me wonder why he has not written a definitive book on Nick Drake but that's for another time. If you love reading about music in the 1960's or just music in general this is a great book albeit very short.

Published by Thriftbooks.com User , 15 years ago
I hope Joe Boyd decides to continue -- he either kept incredible journals or has an astonishing memory. Either way, this is one of the best accounts of the era I've read. To have a producer discuss how drugs influenced/changed the music of individuals and bands while he was working with them, the role politics played in his and various partners' efforts, and provide his completely candid assessments (I don't agree with him all the time -- but he sure doesn't mince words) is just great. If you have the LPs, make sure your turntable is in working order. You'll want to relisten to far more than is on the companion CD. Now it's time for the Hannibal years!

Published by Thriftbooks.com User , 15 years ago
White Bicycles, by Joe Boyd, is a "pick up and don't put down all weekend" type book. Boyd has great storytelling style, here telling us about his career and where it took him with various recording artists, his escapades and participation in London in the "60's", and his professional development as a producer. I got the book primarily because I am a Nick Drake fan. The two existing Nick biographies, while diligently researched, and containing info based on many interviews, still have that degree of detachment that necessarily exists when the authors have never personally met their subject.I certainly wasn't disappointed-as Boyd's few chapters on Nick brought this departed artist to life for me more than the two existing bios. He conveys his interactions with the shy artist, and writes about him in a way that lets us see the person as well as the artist. Yes, it is very funny to read as Boyd describes how Nick answered his telephone (as if it had never rung before) and his first meeting with him after the intro by Ashley of Fairport Convention, then moving in to the production of Five Leaves and Bryter Layter, and Nick's decision to take a new direction w/Pink Moon, which Boyd did not produce. But there are also so many other artists! The book is a fascinating journey through the emerging rock/pop/folk scenes of the 60's early 70's on both sides of the Atlantic, with some gigantic names, and some not so well known on one shore or another. My feeling upon finishing the book was a Question: I wonder what he'll publish next? I want to be there.

Published by Thriftbooks.com User , 16 years ago
You know that saying about the flower-powered era of the 1960's - "If you can remember it, you weren't there." Well, Joe Boyd was there AND he remembers it. This book is a journey through the American Jazz, Folk, Blues and British Folk/Rock scene at a time when the music business was rapidly changing and anything was possible. Boyd has had a career that spans the old and new, the traditional and the cutting edge on both sides of the Atlantic. He tells the tale with honesty, humor, and insight. It is an entertaining read from first page to last. Highlights: Joe Boyd was production manager of the Newport Folk Festival when Dylan unveiled his new electric sound. Boyd tells the story of this sea-change in American music with an even hand and from the inside, painting a rich portrait of both the folk purists and those who wished to transform the genre and make it their own. Boyd produced legends of British folk/rock, Fairport Convention and Nick Drake as well as co-founding the seminal psychedelic London music venue, the UFO club. He takes us into the heart of the English music scene during a time when its influence was at a peak.
Trustpilot
Copyright © 2022 Thriftbooks.com Terms of Use | Privacy Policy | Do Not Sell My Personal Information | Cookie Preferences | Accessibility Statement
ThriftBooks® and the ThriftBooks® logo are registered trademarks of Thrift Books Global, LLC