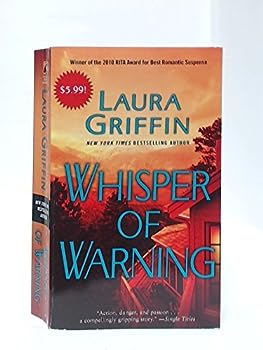 (Book #2 in the The Glass Sisters Series)

WILL HE HELP PROVE HER INNOCENCE... OR LEAD A KILLER TO HER DOOR? Courtney Glass has been in trouble all her life, but nothing tops being an up-close witness to a brutal murder. Until she's accused of... This description may be from another edition of this product.

Very hard to put down! I stayed up until the wee hours of the morning reading. So good!

Published by Thriftbooks.com User , 13 years ago
The Glass Sisters Novels: Thread of Fear Whisper of Warning It's rare when a sequel is as good as it's prequel. Laura Griffin made both of these books spellbinding. Packed with suspense, mystery, action, romance, and hunky heroes who are not afraid of independent modern women. No TSTL female moments and no obvious solution to the mysteries. Each book is a solid 5 stars. Each can stand alone, but you definitely want to read them both... don't miss out on Griffin's talent. Whisper of Warning: Courtney has always lived in her older sister, Fiona's, shadow. Growing up with a promiscuous alcoholic mother, Fiona took it upon herself to raise Courtney even though the girls were only a few years apart in age. As a teen and adult, Courtney has spent a lot of time getting into trouble with the law. Fiona fears Courtney will never grow out of her wild ways. Courtney has had it with her own unstable life style. She is ready to turn over a new leaf. For the past six months she has sworn off drinking, smoking, and men. Her inspiration came in the form of humiliation. Six months ago, she realized that the new boyfriend she was crazy about was a rat. He already had a wife and child. It was the turning point for Courtney. Will is a rookie homicide detective, and a veteran army special forces man. He has his first official case with Austin Police Department. A high profile lawyer has been murdered in his ex-girlfriend's car, with her hand gun. It sounds like an open and shut case of a jealous disgruntled lover. However, from his first meeting with Courtney, Will's gut tells him she is innocent. Before long, his goal changes from investigating Courtney to protecting her from the real murderer while solving the mystery of the killer's identity. Will soon realizes that he can not keep his personal feeling neutral with Courtney. Although he feels obligated to remove himself from the case officially, he refuses to stop hunting the killer until Courtney is safe. If you haven't read the first book yet, start there. It's excellent! Fiona's story: Thread of Fear My fingers are crossed that we will get to read Deveraux and Alex's story next!

Romantic Suspense at its Best!

Published by Thriftbooks.com User , 13 years ago
I pre-ordered this book, and was not disappointed. Just as good as her three others - and that is saying something. Make sure you read them in order. Ms. Griffin has moved to the top of my list of favorite authors. Her books are all keepers!

Published by Thriftbooks.com User , 13 years ago
Courtney Glass has been framed for murder. Who set it up and why did they want her ex-lover dead? Will Hodges is new on the police force and has worked hard to make it to the homicide unit. He knows the facts point to Courtney being the killer but there's just something about her reactions that screams "victim" rather than "murderer". Can Will help clear Courtney's name before she winds up dead as well? WHISPER OF WARNING is billed as the sequel to THREAD OF FEAR as it features the sister of the heroine from the first book. However, WHISPER OF WARNING easily stands alone although I certainly want to read Fiona's story after reading about her sister, Courtney! Laura Griffin is a master at creating intense storylines with multidimensional characters. Her heroines epitomize what it means to be a survivor in tough circumstances. Courtney's past hasn't been easy but it has strengthened her ability to cope with even the craziest situations, a skill that comes in handy when law enforcement seems intent on imprisoning her for a murder she didn't commit. It's hard not to like Courtney as she struggles to maintain her sanity in a world that has seemingly turned against her. Laura Griffin writes gritty but very insightful and emotional powerful stories of romantic suspense. WHISPER OF WARNING is a top notch thriller that is sure to keep readers up late at night, anxiously turning the pages to see just how it all resolves. Highly recommended! COURTESY OF CK2S KWIPS AND KRITIQUES

I'll shout it from the rooftops!

Published by Thriftbooks.com User , 13 years ago
When Courtney Glass reluctantly meets her ex-boyfriend, she doesn't count on watching him get murdered. Neither does she count on all the evidence pointing to her as the killer. But feisty Courtney refuses to give up her freedom without a fight. She struggles to prove her innocence while dodging a killer who wants her silenced forever.~~~Her only ally is an unlikely one. Will Hodges, a new detective in the homicide division, knows Courtney isn't completely honest with him, but his gut tells him she's innocent. Or maybe that's another part of him talking because he can't seem to get Courtney out of his mind. He knows he shouldn't act on their mutual attraction, but Courtney Glass is a hard woman to resist. Soon Will is taking chances with Courtney that could possibly end his career before it even has a chance to get off the ground.~~~I loved everything about this book. Courtney is such a wonderfully complicated character, a true underdog heroine you'll love from page one. Trouble finds her wherever she goes, but she never gives up. She makes mistakes and decisions that can drive you insane, but in the end, you're still anxiously waiting to see her turn her life around. And Will is the absolute perfect man for the troubled heroine. He's everything she needs and everything this reader adores in a hero. If you've liked Laura Griffin's previous works, don't miss this latest book. The suspense and romance will grab your heart right from the beginning and not let go until the last word on the last page. Whisper of Warning absolutely gets a spot on my "favorites" shelf!

Another great book in the Glass sisters series.

Published by Thriftbooks.com User , 13 years ago
Courtney Glass only agreed to meet her married ex-fling David at the park to get him to stop his constant text messaging and hash things out once and for all. When he finally shows up she's pissed. It's hot and humid and he made her wait when he's the one who wanted to meet. When he finally gets into her car he's acting all annoyed and accusing her of harassment. With no time to ponder this confusing accusation a masked gunman gets into the back of the car. After taking their cell phones he forces Courtney's hand into his and shoots David. Courtney manages mace the gunman right in the mouth and flees the car, literally running for her life. Newly promoted Detective Will Hodges lands the case along with his partner Nathan Devereaux. When Nathan has to step down from the case because of his ties to the Glass family it's up to Will to solve David's murder and he can see right through Courtney's lies. Her story about the shooting just doesn't add up but he still believes she's innocent. With heat from David's rich widow, his lieutenant pressures him to arrest Courtney and close the case. As the walls beginning closing in on Courtney she realizes that she has an important piece of information that the real killer wants and she has no choice but to turn to the brooding detective for help. Will knows that getting involved with his prime suspect will end his career but he just can't help being drawn in. Will he find the real killer in time or will the killer catch up to Courtney? From the opening chapter I was hooked. Having read book one in the series, Thread of Fear, I already knew that Courtney attracts trouble but this situation takes the cake. I loved the fact that the action starts immediately and the rest of the book keeps up the pace. Another great thing is that I never figured out who the killer was. It's so refreshing when you can't see it coming from a mile away. I also liked that the relationship between Courtney and Will happens naturally. I hate when characters jump into bed within hours of meeting each other. This was another great read by Laura Griffin. I do recommend reading Thread of Fear first just because I loved it so much but Whisper of Warning is definitely a stand alone read if you just want to jump into the action.
Trustpilot
Copyright © 2022 Thriftbooks.com Terms of Use | Privacy Policy | Do Not Sell or Share My Personal Information | Accessibility Statement
ThriftBooks® and the ThriftBooks® logo are registered trademarks of Thrift Books Global, LLC