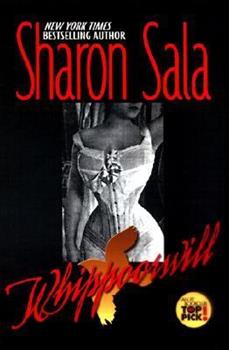 (Book #1 in the Whippoorwill Series)

A rake on the run posing as the new preacher of Lizard Flats dies in the bed of town whore Letty Murphy. Knowing there will be trouble, Letty tries to clean up town drunk Elias Potter and pass him off as a man of the cloth to save the town and her own neck.

What is a girl to do.

Published by Thriftbooks.com User , 14 years ago
Again, I will not give a synoposis of the story as it has previously done by more literate than I. This is a delightful story, life of a girl-woman alone since the age of 12 or so. She makes her way the only way she can and she is still independent. She always has a bath at night, every night, and has an eye out to better herself. What she does and how she does it is a story worth reading and better than that-a story filled with laughter and giggles and snorts of just plain hilarity. Give this book a try and I am sure you will be reading the other two.

Published by Thriftbooks.com User , 15 years ago
Set in the early American West, this book was enjoyable on so many levels. Was it a romance? Sort of, but it was also so much more. I laughed out loud at certain parts and was close to tears at others. Thanks to KG for recommending this one.

Published by Thriftbooks.com User , 15 years ago
I've read a lot of her stories and have enjoyed them well enough to chance this one. Lots of clever make you "laugh out loud" lines. Lots of characters facing their own dilemmas all ending up in or passing through Lizard Flats. I truly enjoyed this book and hope you will too.

Published by Thriftbooks.com User , 16 years ago
When I read the introduction to this book, I didn't think I would like it. I have just started reading Sharon Sala and really like her work. I made myself read this book. I read it in one afternoon. I laughed so hard in places I had tears running down my cheeks. It will be hard to find a book I will enjoy as much as this one. I purchased it in large print for my mother so she could enjoy it also. EXCELLENT READING!!!!!!!!

Published by Thriftbooks.com User , 18 years ago
Though she is a prostitute in the White Dove Saloon, Letty Murphy prays every night that one day her prince will come to Lizard Flats, Kansas Territory to take her away from her pathetic existence. So far the love of her life has failed to arrive so Letty does what she has done since she was orphaned at twelve, turn a trick to survive. Town drunk Eulis Potter earns beers cleaning the saloon. He also supplements his drinking with digging graves.Rumor spreads across the Great Plains that an eastern preacher is coming to Lizard Flats to perform a marriage ceremony. Numerous lost souls needing prayers to include funeral, birth, marriage, and confession arrive in town. However, the preacher shows his calling when he sleeps with Letty only to drop dead in her bed. Frightened that a mob will rip her limb by limb, a desperate Letty asks Eulis to help her. He changes from a mumbling drunk into an eastern preacher, but as he brings salvation to all, who will bring solace to the two neediest souls in the territory?WHIPPOORWILL is a great western tale that is loaded with colorful characters, as Sharon Sala, known for her romantic suspense, will not lack ideas for future novels. The magnificent multiple subplots superbly blend into a final cohesive story line. However, it is the two most pathetic outcasts this side of Poker Flats that grip the heart of the reader with hope of love leading to redemption for them and all the other seemingly local losers. Fans of historical tales of the old west will appreciate this descriptive winner and want more stories set in Lizard Flats.Harriet Klausner
Trustpilot
Copyright © 2022 Thriftbooks.com Terms of Use | Privacy Policy | Do Not Sell My Personal Information | Accessibility Statement
ThriftBooks® and the ThriftBooks® logo are registered trademarks of Thrift Books Global, LLC