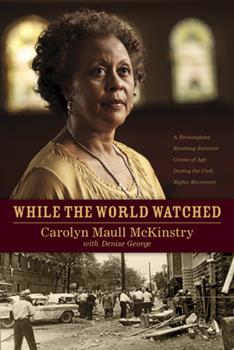 While the World Watched: A Birmingham Bombing Survivor Comes of Age During the Civil Rights Movement

On September 15, 1963, a Klan-planted bomb went off in the 16th Street Baptist Church in Birmingham, Alabama. Fourteen-year-old Carolyn Maull was just a few feet away when the bomb exploded, killing four of her friends in the girl's restroom she had just exited. It was one of the seminal moments in the Civil Rights movement, a sad day in American history . . . and the turning point in a young girl's life. While the World Watched is a poignant and...

A good History Lesson and a good redemption

Published by leslie taylor , 1 year ago
When I first started to read this book, I thought it would be boring because I knew all about the historical events of the Civil Rights Movement but this author is right in the middle of the bombing of the 16th Street Baptist Church where 4 little black girl were killed and one of the 4 was her friend. She share a lot of the behind scenes events that probably never made news but most important is the struggle that she and her family had to endure and pretend as nothing really happened. She made us aware that by being Black that bombings, terror from white folks and mistreatment was the daily occurance of each Black person. They had to continue with their lives and never expect anybody to help them sort out things. As you eloquently chart the history of the movement, she realized much later in life how the effect had left such an ugly scar that she was a walking zombie trying to learn to cope. She finally finds the salvation that she needed and rose up and above anything that she could have imagined. What a courageous woman and a sad saga to endure. Without faith, she would have truly been lost. I thought it was interesting that she shared some of the Jim Crow Laws that we probably never knew and some that we cannot fathom for people to obey. This is a good eye opener and lesson in love and redemption.
Trustpilot
Copyright © 2022 Thriftbooks.com Terms of Use | Privacy Policy | Do Not Sell or Share My Personal Information | Accessibility Statement
ThriftBooks® and the ThriftBooks® logo are registered trademarks of Thrift Books Global, LLC