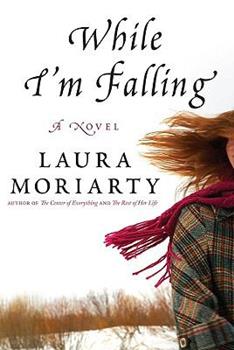 "While I'm Falling deftly captures the moment a child realizes that growing up means being responsible for your parents' mistakes--and preventing yourself from making the same ones. Laura Moriarty keeps getting better and better." --Jodi Picoult, author of Handle with Care In While I'm Falling, Laura Moriarty presents a compelling depiction of how one young woman's life changes when her family breaks up for good. Ever since her parents announced that...

Published by Thriftbooks.com User , 13 years ago
Your emotions will be wrecked after you read this marvelous novel from Laura Moriarty. A 21st century novel to be sure, rich in characters and a truly moving story of a family break-up. Thoroughly good read.

fantastic read, do not hesitate at all

Published by Thriftbooks.com User , 13 years ago
Veronica is a character that feels all too real. I feel as though I could pick up my phone and call her up and discus her experiences with her. I realize I cannot do this but the line between reality and fiction is very blurry because Moriarty does such a fantastic job painting her life for me. Veronica is in college, a pre-med student struggling with Chemistry. That's all she should be worried about at her age. But then her mother screws up and her parents are headed for divorce. Before it's all over her mother's situation will turn the tables on Veronica, who is the child, to place her in a position of providing for her own mother. The details of this story are so dead on. I've been in some of these situations and this author seems to have been as well, or she's just a really fine writer of real life scenario's. Either way, she's got largely likable characters sprinkled throughout this story. Save for one creepy dude with an even creepier disposition. But that guy balances out all the other nicer characters well. Another reviewer stated that this would make a good movie, and they are right. I could totally see this up on the movie screen. This book does a fine job of detailing what divorce does to the entire family and how even the worse events make us stronger, better, more aware of who we really are. I read this one in two day's because I just couldn't stop thinking about Veronica and her dog loving Mother and the nature of their interactions. I could also appreciate that these characters made mistakes, but then again don't we all. This is not a "problem happens" and then "problem solved" story. It's more of a life story. One that makes a lot of sense and touches on a lot of the harsh realities of life but does so with humour and the truth of humanity as well. I loved these characters and hated for this story to end.

Growing up while falling down

Published by Thriftbooks.com User , 13 years ago
I'm a huge fan of Laura Moriarty's work, and her latest novel did not disappoint. The novel tells an all too true tale of a young college student (Veronica) whose family has recently fallen apart. Dealing with her parents' divorce has not been easy for her, and her grief and sense of loss is further compounded by the fact that she's being faced with some intense life decisions. In the process, she makes a few bad decisions that get her into some trouble that she has a difficult time getting out of. However, Moriarty's intricate character development diverts this from a predictable tale into one that highlights the complexities of entering adulthood without the support and comfort from those who were once reliable. I've always appreciated the way that Moriarty endures her characters to readers. Veronica, like some of Moriarty's previous female protagonists, are smart, yet live in and endure situations that evoke pity. However, rather than feeling simply "sorry" for Veronica, we begin to get a bigger picture of not only Veronica's situation but of those around her. There is a secondary character, Haylie/Simone, who knew Veronica's family once upon a time, for example. Through Veronica, we are able to examine Haylie's own struggles and see how different people cope with the same kinds of problems. This novel also brings to light the all too common tale of a woman (Natalie) who gives up the idea of career in order to care for her husband and children and how this decision prevents her in many ways from moving forward after her divorce. While I'm Falling is a family drama, a coming of age tale, and a statement on modern society. More importantly to me, though, While I'm Falling is a beautifullly written book that has haunted me for days. Highly recommended.

Published by Thriftbooks.com User , 13 years ago
Laura Moriarty's new novel follows a family that comes apart with the parents' divorce. Many divorces of middle aged couples happen because the husband and wife find themselves together after the children leave home, with little in common and not much to say to each other. The splits are often bitter at first, but as the couple in Moriarty's book find, life changes for the better when they're not tied to each other in non-satisfying patterns. But while Natalie and Dan's divorce forces them to reestablish their lives at age 50, their daughters - age 21 and 27 - have the most to deal with. Moriary's novel really centers on Veronica, the 21 year old pre-med student at the University of Kansas. She's drifting...doesn't really know if she wants to become a doctor, can't really commit to her boyfriend, a slightly older engineering student, and is finding it hard to work at the part-time job as a Resident Assistant in a large dorm on campus. She doesn't have much money - both parents are feeling the pinch in the economy - and she's an RA because she gets a free dorm room. The older daughter, Elise, is a hard-charging lawyer, like her father. She's less affected by her parents' divorce because she's not on the scene. She receives family updates from telephone calls from her sister and her parents. But if Veronica is Moriarty's focal point in the story, she is upstaged by her mother. Natalie had been a stay-at-home mother since her daughters were born, and often regretted not working when her children were young. Natalie took care of the house, her children, her husband, and both Natalie and Dan's mothers til their deaths. She finds herself with nothing to do, no one to care for, and drifts into a small, mini-affair that her husband discovers. He files for divorce and the family dynamics change. While I'm Falling is a small book in scope. Moriarty doesn't try to cover too much territory. But it's a work of art.
Trustpilot
Copyright © 2022 Thriftbooks.com Terms of Use | Privacy Policy | Do Not Sell My Personal Information | Cookie Preferences | Accessibility Statement
ThriftBooks® and the ThriftBooks® logo are registered trademarks of Thrift Books Global, LLC