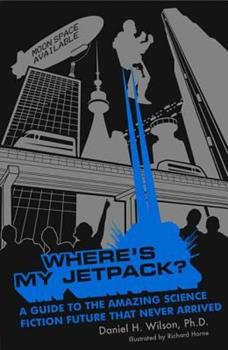 Where's My Jetpack?: A Guide to the Amazing Science Fiction Future That Never Arrived

It's the twenty-first century and let's be honest-things are a little disappointing. Despite every World's Fair prediction, every futuristic ride at Disneyland, and the advertisements on the last page of every comic book, we are not living the future we were promised. By now, life was supposed to be a fully automated, atomic-powered, germ-free Utopia, a place where a grown man could wear a velvet spandex unitard and not be laughed at. Where are the...

Surprisingly informative and clever too!

Published by Thriftbooks.com User , 12 years ago
I was expecting this book to be nothing but humorous fluff, so was pleasantly surprised to find that it contains quite a bit of information about the various technologies that we were promised by scientists back in the 50's!! It is also inspirational to think about how scientists are guided by imagination.

Published by Thriftbooks.com User , 13 years ago
This book deals with such ideas as hover cars, robot servants, and underwater hotels. And why some never got off the ground while others, while they exist, don't exist in the huge numbers they should. For example, we do have underwater hotels, well, a few, but nowhere near enough to make everybody happy. I want robotic maids, I want X-Ray specs, I want teleportation! Fun, full of facts and hopeful. Soon, soon we WILL have all this stuff. It just may take longer than we thought.

Undoubtedly You've Pondered Where Are Many of These Future Technology Visions? Where's My JetPack?

Published by Thriftbooks.com User , 13 years ago
There are a few books out there that have mastered the format of providing answers to scientific, medical or everyday myths in an entertaining, therefore easy to read non journal/textbook sounding way. Where's my Jetpack? however is the first of these great books, that I have come across anyway which tackles the imagined future of decades ago compared to the reality of that future time of being today. Many science fiction novels, TV shows and even advertisements on the back of comic books foretold a future of gadgets, transportation, robot helpers and living environments that would make life so much easier and interesting for your average human. Who hasn't had the conversation of where are the flying cars, underwater cities and so on with their friends at some stage. Even Seinfeld had an episode where George and Jerry brought this up. Up to now though no has provided the answers to why some of these things aren't around or in fact told us that some of them are. Where's My Jetpack? is a great short, fast, informative read that will provide you with lots of information to bring up these very questions again the next time you see your friends. I found Where's My JetPack to be really interesting. It might not go into the depth that some people want on each topic but it does provide enough info to know why something will never happen, or where the product can be found if it is already out there, if we can expect to ever see it in the future or that mankind had it but didn't want it (Smell O- Vision). A great example of a topic covered is the whole invisible man science fiction creation which although not invented by was made popular by H.G. Wells and authors since then such as H.F. Saint. I will readily admit I have been a huge fan of the fiction novels in this genre and Wilson's information on the whole miniature cameras and image projections in the cloak actually turns something you thought would always only be fiction into something that could feasibly become reality one day. I really hope some fiction authors use this cloak method and write some good fiction with it. Other stuff I had never even thought about was also very intriguing such as the elevator to space. I mean it makes sense when you think about it, we don't use jet propulsion to get to the 100th story of an office building so obviously this would be the safer, more cost effective way to get satellites, space station material and even people into space. I'd never even thought of that the sue companies for your own stupidity, that initially was born in the US and is now plaguing the world impacts future helpful to society inventions such as the moving sidewalk. We could right now have faster moving people movers at the airports and elsewhere right now if not for this greedy element of society. Where's My JetPack? is a very good book, I highly recommend it. If you are after other great entertaining as well as educational reads on science also check out Great Mythconceptio

The dream is a live

Published by Thriftbooks.com User , 14 years ago
This book is nice look into the evolution of a revolution. The book focuses on the notion that changes in near future is over estimated and the far future is under estimated. The examples of Self-Steering Car, Moving Sidewalk and others show how the revolution which changed it's form into evolution is today taken for granted.

Published by Thriftbooks.com User , 14 years ago
Since his last book, "How To Survive a Robot Uprising: Tips on Defending Yourself Against the Coming Rebellion" Daniel H. Wilson has apparently satisfied his Ph.D. requirements and his committee members at Carnegie Mellon University, despite having published a less-than-scholarly-but-still-quite-helpful book for a general (and still-woefully-unprepared-for-a-robotic-rebellion) audience. Congratulations! In his new book, "Where's My Jetpack?: A Guide to the Amazing Science Fiction Future that Never Arrived", roboticist Wilson takes the same tongue-in-cheek (vocal processor-in-speaker?) approach to amazing-science-fiction-future technologies as he took to surviving a robot rebellion, combining real-world science with technically feasible technologies to come up with practical suggestions and advice. From flying cars to ray guns to food pills to x-ray specs, Wilson takes 30 futuristic technologies we have yet to enjoy on a large scale and discusses the current state of the art, the science behind it, and the obstacles preventing widespread implementation. Breezy, informal and yet very informative, "Where's My Jetpack?" provides a fun romp through most of the amazing technologies which have become staples in science fiction but not in real life. Each chapter stands on its own, with some technological promises closer to being realized, such as household robots and ray guns, than others, such as teleportation of humans or moon colonies. Richard Horne provides bold illustrations perfectly complementing the retro-futurist subjects of the book. Always enjoyable, "Where's My Jetpack" may be one of the few books by a Carnegie Mellon Ph.D. that doesn't require a Ph.D. to read.
Copyright © 2020 Thriftbooks.com Terms of Use | Privacy Policy | Do Not Sell My Personal Information | Accessibility Statement
ThriftBooks® and the ThriftBooks® logo are registered trademarks of Thrift Books Global, LLC