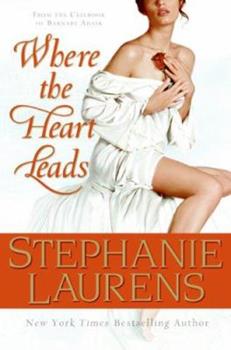 Where the Heart Leads: From the Casebook of Barnaby Adair (Cynster Novels)

(Book #1 in the Casebook of Barnaby Adair Series)

New York Times bestselling author Stephanie Laurens knows the world of Regency London . . . especially the exclusive enclave of luxury in which the aristocracy lived in wealth and comfort. But outside that glittering circle lay another world . . . and Laurens pulls back the curtain that has hidden it from us-until now. Penelope Ashford, Portia Cynster's younger sister, has grown up with every advantage-wealth, position, and beauty. Yet Penelope is...

Published by Thriftbooks.com User , 11 years ago
I needed this book to complete the series on the Cynster novels. I enjoyed the book very much along with the others of the series. I think anyone would like the series.

Published by Thriftbooks.com User , 11 years ago
Another Cynster novel, and well worth the time. Yes, it's a romance; yes, it's a Regency-type; yes, it's also a mystery, but - I keep reading the Cynster series because I am always freshly amazed at the author's ability to make nuances in each set of protagnists so that they are fully-fleshed, real, individual characters: real people with individual backstory, characteristics, reactions, motives, and thinking patterns, certainly the most difficult part of writing any type of fiction.

Published by Thriftbooks.com User , 13 years ago
Well, I for one couldn't put it down till I'd read it through to the end. Story line & characters are well developed & very interesting. Dialog is funny and fast and romance scenes are great! Both romances are well drawn & the people very believable & likeable. I've never gone wrong with any of her books -- they are delightful!!! Thanks Stephanie!!!

Published by Thriftbooks.com User , 13 years ago
Where the Heart Leads is considered the 15th book in the Cynsters Family Saga, and although the Casebook of Barnaby Adair is mentioned on the cover, that is the true nature of the book. Cynster fans, looking for a story like the earlier passionate and heart stopping handsome Cynster males sensually pursuing strong beautiful ladies, made-to-be Cynster brides, may be left just a bit disappointed. That is not to say that Stephanie Lauren's most recent book is not extremely well-written with characters of depth, it is just that after a while the whole Cynster mystique gets diluted so much down the line of cousins and siblings of Cynster relations that the reader now has to expect something different; and this story is different, not close to the original fabulous Cynster novels that were written early on. Those will always remain favorites for romance fans and collectors. No one knows the Regency Period and 19th century more than Stephanie Laurens; especially when she wrote a few Cynster novels with storylines about the rare and extremely interesting horse racing world that took place during the period. Now she entertains and educates readers further with her knowledge of what it is like behind the glittering ballrooms, gentlemen clubs, shining ladies in silks and rogues outfitted in Hessians and superfine. During this period there were those that suffered while others lived lives of leisure. In this book we see how the other side lives. Portia Cynster started a Foundling School for Orphans that aids poor orphans after the death of their only living relative, which was the focus of another Cynster novel and mentioned in some of the others. Now after marrying Simon and running a house and having children of her own, the responsibility of the school has been turned over to Penelope, Portia's sister. A beauty, but considered a bluestocking and a bit overwhelming to many gentlemen of the ton, Penelope has been dedicated to her work and has never thought of marrying, believing she would never be able to find the type of true love other Cynster women have found, especially in her unique position of running the school and having a rare intelligence and deep calling for social justice. Her feelings about love, passion, and even marriage begin to change a bit after four boys due to arrive at the school show up missing and she considers asking the third son of a nobleman, Barnaby Adair, well-known for solving mysterious cases of the ton, to consider helping her find these boys. As soon as she knocks on his door late one night she realizes that she is drawn to the handsome and intelligent Barnaby, and is more thrilled when she realizes he understands, respects and is not judgmental about her school, intelligence and involvement in social causes. What a coincidence that the stunning and intelligent Penelope shows up at Barnaby's door just when he is sitting alone in his parlor nursing a brandy and deciding what to do with his life that was once exciting and

Published by Thriftbooks.com User , 13 years ago
This was a really enjoyable story with two major threads, a major and a minor romance and a murder/kidnapping mystery with an unusual mix of characters from different social levels in society. More time in the book is actually given to the murder/kidnapping story where various young orphan boys are kidnapped before being taken to a Foundling Home in order to be trained as Burglar's Boys. Penelope Ashford, the administrator of the Foundling Home and the daughter of a Viscount, takes upon herself to investigate the disappearance of the boys. She knows she doesn't have the skills herself, although she has plenty of courage and energy, but she knows that Barnaby Adair, third son of an Earl, is known for investigating crimes and having links with the Police. She goes to Barnaby and persuades him to help her to find the boys, and thus starts this enjoyable plot. Barnaby assumes that he can 'handle' Penelope but she soon confounds his ideas and expectations and he ends up working alongside her, sometimes following in her wake. Their attraction to each other becomes apparent but Penelope is dead set against marriage and so Barnaby has to use all his guile and his understanding of her nature to try to change her mind. There's a secondary romance between a policeman and his informant which is also sweet and well-written and an interesting insight into life for the middle classes and working classes in Regency London. All the characters in this story are well drawn, ranging from the main characters to the dying mother of a young boy, and Laurens' pacing is always excellent. The point of view sometimes changes unexpectedly mid-text which can be a bit confusing and the historical detail is a bit suspect in that our heroine seems to be able to gad about all over the place without anyone noticing she's unchaperoned. However the story wouldn't work well if she was constantly under the surveillance of her parents so it's an acceptable fudge of historicity to further the plot. All in all this was a really enjoyable read with the kidnapping plot adding spice to the story. Originally published for Curled Up With A Good Book © Helen Hancox 2008
Copyright © 2020 Thriftbooks.com Terms of Use | Privacy Policy | Do Not Sell My Personal Information | Accessibility Statement
ThriftBooks® and the ThriftBooks® logo are registered trademarks of Thrift Books Global, LLC