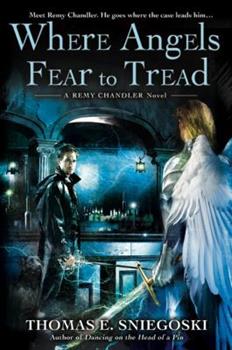 Where Angels Fear to Tread

(Book #3 in the Remy Chandler Series)

Six year-old Zoe York has been taken and her mother has come to Remy for help. She shows him crude, childlike drawings that she claims are Zoe's visions of the future, everything leading up to her abduction, and some beyond. Like the picture of a man with wings who would come and save her-a man who is an angel. Zoe's preternatural gifts have made her a target for those who wish to exploit her power to their own destructive ends. The search will take...

Published by Thriftbooks.com User , 11 years ago
Six-year-old Zoe York has disappeared without a trace and it is up to Remy Chandler, Seraphim PI, to find her. Hired by the girl's desperate mother, Remy begins a search for the abducted child which rapidly leads him into the world of the bizarre as the pictures drawn by the little girl reveal visions of the future. And he's not the only one looking for her. Delilah, an immortal succubus, is using all the ample resources at her command to find the little girl and the divine secret that she carries. It's a race against time for Remy as he battles everything from Delilah's military trained thugs to patrons of a supernatural bar. Teaming up with Samson the strong man and his raucous brood of children gives Remy an edge, but it's going to take a lot more than that to wrest the frightened child from the clutches of an eldritch god... Sniegoski produced another amazing addition to the Remy Chandler novels with this book. I will say that I was slightly disappointed that the end of the second book isn't really addressed in the third, but the new plot was still excellent. The book flashes pretty consistently between Remy's investigation and the brutal methods used by Delilah to find Zoe. The primary plot line still involves a Biblical story (hopefully, you caught the references to both Samson and Delilah), but Sniegoski begins to expand his supernatural repertoire and strays from strictly Biblical material with the addition of creatures like a minotaur and the pagan god Dagon. The pacing was rapid and the characters you love from the first two books, such as Marlowe and Mulvehill, make appearances. The conclusion was satisfying and there is a lot of action leading up to the climax of the book.

Published by Thriftbooks.com User , 11 years ago
A frantic mother comes to Remy because her husband took their 6 year old autistic daughter. Delilah has great power, but is seeking more. Samson is looking for Delilah (yes, them), to kill the betraying witch. A Sumerian god is wants to be a god again. Zoe, the six year old, who rocks and hand flaps, also draws the future, and is who they all seek. And Remy, either as a P.I. or angel, must stop most of them. I really like these urban fantasies/ mysteries because Remy and Marlowe (his dog) and the rest of his pals and allies are so delightful to spend time with.

Where Angels Fear To Tread

Published by Thriftbooks.com User , 11 years ago
This is the third Remy Chandler novel, the story of a warrior angel who decided to leave heaven and experience life as a human. Remy is a private detective who has a knack for still getting involved with cases that are on the supernatural and heavenly side. In this novel Remy is contacted by a grief stricken mother, because her daughter is missing and she left behind drawings of Remy. Things quickly become more then a missing child case. All of the Remy Chandler books are well written and paced to keep you on the edge of your seat. Sniegoski also does a fantastic job of getting you invested in all his characters and making your heart hurt for Remy and his journey through life. I've reccomended these books since the first one and this newest novel only adds to my belief that these books and Remy Chandler are heaven sent.

Published by Thriftbooks.com User , 11 years ago
In Boston, former seraphim Remy Chandler struggles to control his heavenly power ever since his beloved Madeline died six moths ago. Deryn York, the frantic mother of six years old Zoe, pleads with Remy to find her missing daughter. The distraught woman shows the private investigator drawings she says her child drew that foretell her abduction by her father Carl and one picture of a male angelic savior with a big black dog in front of a brownstone that Remy recognizes in entirety. Unbeknownst to Remy, cursed to walk the earth alone Delilah seeks the child as does the followers of the god Dagan. Blind Samson also joins the mix seeking the little girl with power to predict the future. Soon everyone converges in West Virginia. This exciting urban fantasy is fast-paced and filled with action from the moment Remy sees the last drawing and never slows down as the hero realizes all hell is about to break out over a child. Remy is super as he struggles to contain his power though he would not mind burning a few worthless souls yet will move heaven, hell and earth to protect an innocent little girl. Delilah is a terrific villainess who will do anything to further her power; except for Remy, she makes the rest of the cast including her former husband look emaciated. Fans will relish this fine tale and seek the hero's back story (see, A Kiss Before the Apocalypse and Dancing on the Head of a Pin). Harriet Klausner

Published by Thriftbooks.com User , 11 years ago
March 2, 2010: I can't say that I have been the biggest fan of the urban fantasy genre but I have been totally hooked on Jim Butcher's Harry Dresden Files for a few years. Last summer I picked up the Mean Streets compilation to see what Harry was up to and discovered Sniegoski's Remy Chandler character in his novella "Noah's Orphans". It was a terrific story and an even more interesting concept: An angel living amongst humans working as a private investigator. I immediately picked up the first two novels at my local bookstore and read them both in a single sitting. The books offer an interesting take on the concepts of angels, gods, heaven and hell weaved into two very good mysteries. What I really love, and what I found very moving at times, are the depictions of Remy's relationships with his human wife, his human friend Steve, his friend Francis (a former guardian angel who once was on the wrong side during the war in heaven and now guards one of the gates of hell as a penance) and especially with his dog and best friend, Marlowe. Angels have the ability to talk to animals and we get to eavesdrop on these hilarious and believable conversations. Sniegoski has not missed a beat with his newest installment in the series, "Where Angels Fear to Tread". Remy has been hired by the mother of young autistic girl to search for her kidnapped daughter who seems to have some clairvoyant abilities and may be the key to something big and powerful. He gets a little help from the Old Testament hero Samson, who is still alive, because the little girl is also being sought by Samson's former lover and betrayer Delilah for reasons unknown. Samson is still a little bitter over the breakup. It's a very enjoyable take on the biblical characters and it's obvious the author had a lot of fun making them contemporary and letting us know what they have been up to for the last four thousand or so years. I definitely recommend this book to anyone and I look forward to the next book!
Copyright © 2020 Thriftbooks.com Terms of Use | Privacy Policy | Do Not Sell My Personal Information | Accessibility Statement
ThriftBooks® and the ThriftBooks® logo are registered trademarks of Thrift Books Global, LLC