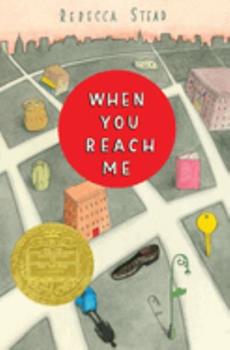 When You Reach Me: (Newbery Medal Winner)

Like A Wrinkle in Time (Miranda's favorite book), When You Reach Me far surpasses the usual whodunit or sci-fi adventure to become an incandescent exploration of 'life, death, and the beauty of it all.' --The Washington Post This Newbery Medal winner that has been called smart and mesmerizing, (The New York Times) and superb (The Wall Street Journal) will appeal to readers of all types, especially those who are looking for a thought-provoking mystery...

Realistic novel with a heart of fantasy

Published by Thriftbooks.com User , 13 years ago
"When You Reach Me" is a rare gem of young adult fiction: an involving story whose subtle writing and characterization pull you in as much as the mystery that binds the story together. I liked the slice of life of 1979 New York as twelve-year old Miranda and her friends explore their neighborhood, giving us a bit of a Free-Range Kids perspective on days gone by. Miranda gains and loses friends, and grapples with normal sixth-grade angst, but her worries take on a new twist when she discovers mysterious notes from someone who tries to convince her that he or she can see things that have not happened yet, adding fantasy and sci-fi into this realistic setting where you'd least expect it. Once the mystery has been solved, many readers will want to go back and read the story a second time to see how the pieces fit together in a new light. In a thematic parallel, Miranda's experiences reflect her own shifting ability to see situations through other people's eyes. She also learns that giving or withholding small acts of kindness or meanness can have big consequences. What I love though is that the story is told in a way that does not feel at all preachy. This is a great book for anyone ages 10 and up. It would be okay for younger kids, but those readers have so many choices that I would save "When You Reach Me" for age 10, because in my experience it's harder to find good books for that age. Also, the point of view of the story is a bit tricky (skillful, but unconventional), as Miranda writes to her mystery correspondent, which could be confusing for younger readers but an interesting challenge for older kids. As an adult reader and I thoroughly enjoyed "When You Reach Me." (I am actually Miranda's "age," 11 in 1979, and I loved the part about her Mom's obsession with the $20,000 Pyramid. Brought back memories.) In the story Miranda talks a lot about her favorite book, one that has captivated readers from the 1960's to today, A Wrinkle in Time, and I would recommend reading that first!

Richie's Picks: WHEN YOU REACH ME

Published by Thriftbooks.com User , 13 years ago
Richie's Picks: WHEN YOU REACH ME by Rebecca Stead, Random House/Wendy Lamb Books, July 2009, 208p., ISBN: 978-0-385-73742-5; Libr. ISBN: 978-0-385-90664-7 "All good things in all good time." -- Hunter/Garcia "I check the box under my bed, which is where I've kept your notes these past few months. There it is, in your tiny handwriting: April 27th; Studio TV-15, the words all jerky-looking, like you wrote them on the subway. Your last 'proof.' "I still think about the letter you asked me to write. It nags at me, even though you're gone and there's no one to give it to anymore. Sometimes I work on it in my head, trying to map out the story you asked me to tell, about everything that happened this past fall and winter. It's all still there, like a movie I can watch when I want to. Which is never." As I've written at other points in time, I just love finding a book that I enjoy so much that I want to immediately read it a second time. What, for me, is even rarer is finding a book like WHEN YOU REACH ME that I enjoy even more the second time through. The reason for this is that there is a lot of foreshadowing to this story and, the second time through I know what is going to happen and I can watch for all of the little clues that I missed the first time. Reading through the second time, coming upon what I had missed, I found myself thinking about what life would be like if it could be lived like a book so that you could read it through the first time, find out what happens, and then go back and live it through a second time being able to watch for all those clues necessary for avoiding the dangers and mistakes. "He showed up around the beginning of the school year, when Sal and I still walked home from school together. A few kids called him Quack, short for Quackers, or they called him Kicker because he used to do these sudden kicks into the street, like he was trying to punt one of the cars speeding up Amsterdam Avenue. Sometimes he shook his fist at the sky and yelled crazy stuff like 'What's the burn scale? Where's the dome?' and then he threw his head back and laughed these loud, crazy laughs, so everyone could see that he had about thirty fillings in his teeth. And he was always on our corner, sometimes sleeping with his head under the mailbox." Miranda, the twelve-year-old narrator of WHEN YOU REACH ME, lives with her mom in an apartment house in New York City in the late 1970s. Miranda has a healthy obsession with the book A WRINKLE IN TIME. Her mother's obsession is with becoming a contestant on The $20,000 Pyramid, the television game show hosted by Dick Clark. There are three puzzles that quickly develop in WHEN YOU REACH ME: First, there are little snippets of Miranda referring to mysterious notes she finds in unexpected places that contain unknowable stuff, and some unexplained letter that she has been asked to write to some unrevealed person. I didn't figure out what these were all about until almost the en

Published by Thriftbooks.com User , 13 years ago
This is as close to perfect as any recent book I've read for young readers. The prose is clean, almost elegant, but the author spares no detail, from the smells of copies back in 1979, to the way in which the bread is cut for sandwiches as Jimmy's. The book offers subtle, non-preachy lessons in how to treat people, how to get along, and how to maintain relationships as kids grow into tweens and teens, never obtrusively and always with as much respect for the fun parts of the tale as one finds in the book that inspires and informs this one: A Wrinkle in Time. I'm planning to buy copies of this for each of the tween girls in my life. Most of them already have the L'Engle book, but for those who don't, I'll send a copy of that as well. When You Reach Me, unlike so many books available for girls that age, will not suffer by comparison.

things that are different

Published by Thriftbooks.com User , 13 years ago
There seems to be an overabundance of books with vampires and magic these days so it is very refreshing to read something different. And different in a very good way. It's a mystery who is leaving Miranda strange notes and how this person knows things about her that no one could know. But there are other things she needs to figure out too. Like why the new kid punches Sal, why Sal stops talking to her, and why she doesn't like Julia. Rebecca Stead deals with the usual angst of adolescence with a good hold on reality with characters that felt like they could be the kids next door. She seems to remember what it felt like to be twelve, except I don't remember being so deep as to think that "Sometimes you never feel meaner than the moment you stop being mean. it's like how turning on a light makes you realize how dark the room had gotten." But I could relate to Miranda's love of "A Wrinkle in Time" and her struggle to figure out where she fits in with friends and enemies and how things can change. I can't say more without giving away more of the story, which I would hate to do because it was such a satisfying read. All I can say is, things are not always as they seem.

Published by Thriftbooks.com User , 13 years ago
"When You Reach Me" is a smart, thoughtful book about smart 6th graders written for a young audience. The central theme is time travel, but it is ultimately a novel about friendship and tolerance. It tackles casual prejudices, including race and class. Miranda, the central figure, lives with her single mother in a small, semi-shabby New York apartment. Some of her friends have two parents, some only one. Some have money and some are in families who struggle to make ends meet. Ultimately, their circumstances are far less important than their own good character, and when their friendships are tested they manage to work it out. Beautifully written, the conversations ring true and Stead's descriptions of Miranda's feelings often reminded me of myself in 6th grade. My fifth-grade granddaughters love the story, and I suspect they will each revisit it from time to time. An exciting adventure/mystery with no villains, this is a great book for girls age 10 and up.
Trustpilot
Copyright © 2022 Thriftbooks.com Terms of Use | Privacy Policy | Do Not Sell or Share My Personal Information | Accessibility Statement
ThriftBooks® and the ThriftBooks® logo are registered trademarks of Thrift Books Global, LLC