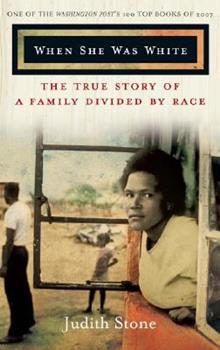 When She Was White: The True Story of a Family Divided by Race

Released to coincide with the film 'Skin', this is the truly remarkable story of a black daughter who was born to white parents in Apartheid South Africa.

Published by Thriftbooks.com User , 15 years ago
I want to commend Judith Stone for the phenomenal work she has done in discussing a number of difficult subjects: Sandra Laing herself, the history of South Africa, and the nature of memory, family, and the examined life. Clearly, Sandra's lack (repression) of memory, and her inability to articulate her feelings, left Stone with an enormous challenge. She works through this brilliantly by marshaling the journalistic reports from the time and later, interviewing people who know Sandra, and sensitively explaining and exploring Apartheid's tortured history. Stone uses her knowledge of studies of PTSD, false-memory syndrome, and other relevant fields in psychology to examine Sandra's individual and South Africa's collective forgetfulness/refusal to admit reality. All in all, Stone has done a stunningly professional and sensitive job in illuminating one person's life, the cruel and terrible absurdities of Apartheid South Africa, and, more broadly still, what it means to live in a world where an ideological rigidity based on lies and hypocrisy sucks the life out of everyone--oppressor or oppressed.

Published by Thriftbooks.com User , 15 years ago
When Sandra Laing was born in 1955 to a pro-apartheid Afrikaner couple in South Africa she was registered as a white child - but upon entering a white boarding school, was persecuted by students and teachers because of her brown skin. Her parents believed an interracial union back in their family history was to blame, but neighbors thought Mrs. Laing had committed adultery with a black man and the entire family was shunned. She was reclassified as 'coloured', her parents fought the South African courts to reverse the determination, then as a teen Sandra eloped - with a black man - and her parents disowned her. WHEN SHE WAS WHITE: THE TRUE STORY OF A FAMILY DIVIDED BY RACE crosses back and forth along discrimination lines and is riveting. Impossible to put down, it will enhance any general-interest lending library and is an emotionally charged, highly recommended pick.

The Illusion of Race

Published by Thriftbooks.com User , 15 years ago
This is an excellent book, that speaks to the immense stregth of man/womankind. It is a book about family,friendship, romance and the indominable spirit of humankind. Often humorous, the characters in the book become part of your family - making you question what it really means to be black, white, brown...The characters make you understand that we really are made up of colors in a rainbow...that there is only a matter of a single gene that makes us different. The whole concept of race is simply not a biological construct, but rather one that is over empahsized (even today) as a socio-political construct...an illusion that purports to spread the idea of racial supremacy. The idea posited is simply a way of encouraging one color of people to dominate...think more highly of themselves, merely because of color. What a surprise and a biological reality that an "all white" couple (is there really such a thing?)could give birth to a "black" child. I so enjoyed reading the book, comparing and contrasting South Africa to America, that I passed it along to my mother, who also loved it. The author has done an excellent job of grasping the anguish and feelings of inner conflict (and loss) that must be experienced by Judith Stone, even today. Thank you for helping her share her story with the world.

Published by Thriftbooks.com User , 15 years ago
An extraordinary story, extraordinarily written. Judith Stone does an masterful, sensitive job with her latest book about a South African girl with brown skin and dark, curly hair born to white Afrikaner parents. Young Sandra's physical appearance confounds predispositions of what constitutes race in the South African apartheid government. Is she "White", a "Coloured" or is she "Black"? These racial categories are at the core of Stone's narrative of Sandra's difficult yet ultimately affirming life, in which she blends insights into the history of Social Darwinism and eugenics, the psychological effects of childhood trauma, and the history of South African Dutch colonization resulting in the horror of apartheid. Stone keeps the tone even throughout, sensitive to Sandra's messy life, made all the more difficult by her repressed yearning for love and acceptance. The reader is immediately taken by Sandra's complex movitations that ultimately result in a mixture of success and failure. At times this reads like a timeline narrative, a mystery, a psychological profile, and a background reading on the apartheid politics and pseudoscience of race. Judith Stone keeps it all in balance for the reader, making this a fascinating book on so very many levels. Great stuff!

Published by Thriftbooks.com User , 15 years ago
From the first page I was riveted -- could not put it down and look forward to reading it again - I loved it. It made me laugh and cry; it entertained and educated me. What a fascinating story about a recent and, in some ways, still ongoing situation, told with sensitivity and humor.
Trustpilot
Copyright © 2022 Thriftbooks.com Terms of Use | Privacy Policy | Do Not Sell or Share My Personal Information | Accessibility Statement
ThriftBooks® and the ThriftBooks® logo are registered trademarks of Thrift Books Global, LLC