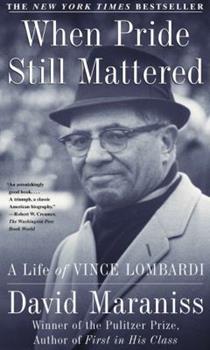 When Pride Still Mattered: A Life of Vince Lombardi

In this groundbreaking biography, David Maraniss captures all of football great Vince Lombardi: the myth, the man, his game, and his God. More than any other sports figure, Vince Lombardi transformed football into a metaphor of the American experience. The son of an Italian immigrant butcher, Lombardi toiled for twenty frustrating years as a high school coach and then as an assistant at Fordham, West Point, and the New York Giants before his big break...

Published by Ken Lynch , 7 months ago
I love everything about this life story. Vince Lombardi was my high school football coach at S.t Cecilia High School. His brother Harold was my biology and Physics teacher.Vince coached for 8 years and was head coach for 3years and never lost a game.

Published by Thriftbooks.com User , 23 years ago
If there's a better gift for a father or grandfather than "When Pride Still Mattered," I haven't heard of it. This is truly a masterpiece of a biography, probably the best I've ever read. Like most of the reviewers have already said on this page, the book is dripping with details and wonderful accounts not just from Lombardi's players, but his paperboy, high school classmates, golf caddies, etc. I'm not the world's biggest football fan, but it didn't matter reading this book. Lombardi's story is a true American classic. Can't wait for Maraniss' next biography!

Published by Thriftbooks.com User , 23 years ago
When I was a kid, I read Green Bay Packers lineman Jerry Kramer's book Instant Replay, his diary of the 1967 season, and to this day that era still has a mythical hold on me. Indeed, "When Pride Still Mattered: The Life of Vince Lombardi" continued the magic. After also reading David Maraniss' biography on Bill Clinton, I'm convinced Maraniss is one of the best non-fiction writers of our time. With Clinton and now Lombardi, Maraniss proves he has the ability to take a person who has reached unimaginable success, and show us their strengths, weaknesses and flaws, without taking away from what made them great in the first place. This is a book that you wish would never end. It's that good.

A Rewarding Sports Biography and more

Published by Thriftbooks.com User , 23 years ago
Although I grew up in during Lombardi's rise to fame in the 1960's, I have never read any other sports book or biography that dealt with him, up to this time, motivated finally more by Mr. Maraniss's previous books on President Clinton, which I have read, than by any great desire to become knowledgeable about this football great.There is not much that I can add that hasn't already been said in all the other reader reviews that appear on this page. The author's biography presents a no-holds-bared look at this interesting sports coach and personality that fortunately, as another reader said, presents a man whose reality lives up to the myths that have been built up around him.What I would like to add is that this book also provides some very useful historical context around the Lombardi years that makes his life all the more vivid: life in the fifties and sixties, the rise of professional football to its prominence today and the rise and influence of the media in the sports world as well as in all other aspects of late 20th century life.This is a book ANYONE will enjoy, not only because of the subject matter it covers, but also due to the meticulous reporting, fluid writing style, and most of all, for the way the book sincerely tugs on the emotions of the reader, for Lombardi, his family and for a time period gone by.In sum, this is a book that rewards the reader all the way around.

One of the best biographies ever written.

Published by Thriftbooks.com User , 23 years ago
My dad was one of the eight men who played under Lombardi for his entire tenure in Green Bay. In fact he is a frequent contributor to Mr Maraniss's work. Now that my some of bias has been revealed I want to say that this is the finest biography I ever read. Mr. Maraniss filled out so much about a character I thought I knew well. I had heard my dad say the things about Lombardi that are quoted in the book, so in some ways the inclusion of his thoughts in the book were its least interesting parts to me. The author's research into Lombardi's early life and his conclusions from that research, not just names and dates, is a thread carefully woven through every chapter to a point that near the end the effect is nearly haunting. Lombardi was not really the myth he is often portrayed as, but rather a man acutely aware of his surroundings in nearly every circumstance who was able to absorb enough positive material from each that when his opportunity finally came he seized it and delivered all he had absorbed in a way no one ever had and maybe never will again. The true inspiration that comes from this book is not what Lombardi became but rather the revelation of the power of something so simple as paying attention to what makes great things great and staying dedicated to those values. I am forty years old and there is picture in my office that is one of my most prized possessions. The photo is of my dad, my brothers, Lombardi and me getting off the plane before the NFL Championship in 1960. It was always important to me because of its unique representaton of that part of my family. Though I never thought it possible, Mr. Maraniss made it more precious to me because of what he taught me about the only guy in the picture who was not a member of my family.

Published by Thriftbooks.com User , 23 years ago
As he did in First In His Class, his wonderful biography of Bill Clinton, Pulitzer Prize-winning author David Maraniss has packed so many details and so many colorful stories into When Pride Still Mattered that the book reads more like a novel than a biography. Football fans probably think they already know everything about Vince Lombardi; serious readers may think they have no use for a biography of a football coach. Both don't know what they're missing. There's plenty of football here: great chapters on Fordham's Seven Blocks of Granite, the New York Giants team with assistant coaches named Vince Lombardi and Tom Landry, the immortal Ice Bowl, Lombardi's final season in Washington. But Maraniss sets it all in its proper context, and the reader knows what it's like to live in the New York of the 1930s (even which subway routes to take from here to there), knows Lombardi's weekly routine in Green Bay (clean closets, watch Tom and Jerry cartoons), feels how cold it was at Lambeau Field or how difficult it could be for his family to live with "St. Vince." This is not merely a sports book or only a biography; like Lombardi himself, it's everything -- more than -- and yet nothing, like you'd expect it to be.
Trustpilot
Copyright © 2022 Thriftbooks.com Terms of Use | Privacy Policy | Do Not Sell or Share My Personal Information | Accessibility Statement
ThriftBooks® and the ThriftBooks® logo are registered trademarks of Thrift Books Global, LLC