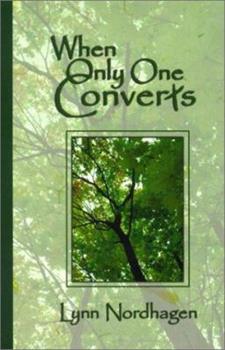 When Only One Converts

By Lynn Nordhagen *What happens when the two most important relationships in your life seem to be on a collision course? *How can you be odedient to God when obedience threatens your marriage vows?... This description may be from another edition of this product.

Published by Thriftbooks.com User , 13 years ago
This is an excellent book on what can happen when a marriage partner joins a religion which is different from the religion they both subscribed to when they were married. The book includes some sad stories and some positive stories.

Published by Thriftbooks.com User , 20 years ago
This book helped me realize that I wasn't alone. That other Catholics who have protestant spouses feel like I do. It helped me learn how to handle different aspects of being in a mixed marriage. I would recommend anyone who has converted or reverted to the Catholic faith without the support or company of their spouse to read this book.

An Important Book for Converts

Published by Thriftbooks.com User , 21 years ago
This book should be in the library of every married person considering conversion to the Catholic Church whether their spouse is in synch with their journey or not. It should also be in the library of everyone in a mixed marriage. It is not about how to convert your spouse, it is about how to live with the tension of seeing things different religiously and still maintaining the unity of your marriage.The book's contributers run the gamut from those whose spouses were Catholic while they were Protestant, to those where the spouses were both Protestant until one converted, and even one where the spouse remains essentially non-religious. The marriages have mostly weathered the crisis and some have even flourished.It is a book not only for the person becoming Catholic, but for the spouse who doesn't choose to join them, or at least not yet. It will provide support for the convert (who gets the message "I'm not alone in this"), but help the non-convert to understand what is going on. It also provides tools for making this a growing experience for your marriage instead of just a source of discord. In that vein the chapter by Gregory Popcak alone is worth the price of the book.So if you've read Rome Sweet Home and find it's message compelling get When Only One Converts before you go any further down the road. Your spouse will thank you for it.

Offers hope and insight for those in mixed marriages

Published by Thriftbooks.com User , 21 years ago
Mixed marriages are no picnic. For six years, my wife and I attempted to do the mixed marriage thing - sometimes attending her Church, other times attending mine, and sometimes attending both. Our story is among the 15 told in Lynn Nordhagen's book.Nordhagen's book is a twist on the popularity of current conversion story books. It offers stories of pain and honesty from couples in mixed marriages between a Catholic and non-Catholic spouse.Through the personal stories the book seeks answers to questions such as, "how can you be obedient to God when obedience threatens your marriage vows?" and "Can you love God if it means hurting the one you love most on earth?"Each of the stories make the point that a spouse should not try to convert their mate. Personally, had my wife ever suggested or pressured me to become Catholic I would have run in the opposite direction. Catholic and non-Catholic spouses in mixed marriages will find much to identify with in this book. It is a much needed addition to the library of conversion story compilations.
Trustpilot
Copyright © 2022 Thriftbooks.com Terms of Use | Privacy Policy | Do Not Sell My Personal Information | Accessibility Statement
ThriftBooks® and the ThriftBooks® logo are registered trademarks of Thrift Books Global, LLC