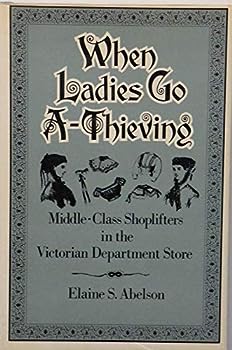 This book focuses on middle-class urban women as participants in new forms of consumer culture. Within the special world of the department store, women found themselves challenged to resist the enticements of consumption. Many succumbed, buying both what they needed and what they desired, but also stealing what seemed so readily available. Pitted against these middle-class women were the management, detectives, and clerks of the department stores...

Published by Thriftbooks.com User , 17 years ago
Elaine S. Abelson's When Ladies Go A-Thieving is a remarkably ambitious book that seeks to examine numerous aspects of social history from roughly 1870-1914. While her primary area of investigation is the middle-class female shoplifter in the department store, her book undertakes serious examination of such varied concerns as class identity and class conflict, the rise of consumer culture, and the changing roles of women in society (and society's attempts to reconcile these new roles with existing gender stereotypes). Abelson's thesis defies quick encapsulation, as it relies on several assumptions and takes form through multiple, equally important conclusions. As women's functions moved increasingly out of the home, and into the public sphere, one of her primary responsibilities was the acquisition of goods. That shopping was women's work (and leisure) was a widely understood stereotype. To address this demand, the department store developed as a place where a woman could see and acquire a large array of consumer goods. It also served to instill a "calculated arousal of desire" (11) and, according to Abelson, for many women the lure proved irresistible. They sought to acquire the coveted goods by any means necessary, and so they shoplifted them. Lower-class women, when caught, were dealt with as criminals. Yet many middle-class women, who could ostensibly afford the items they stole, were also caught in the act. This reflected poorly on the department store's model of mass consumption, if not mass consumption in general, and it also upset contemporary stereotypical notions of female moral superiority and incorruptibility. Thus these middle-class crimes were swept under the rug with a diagnosis of kleptomania. A woman was seen as weak-willed, ill equipped by her very nature - her gender itself - to control her desire for consumption. The store thus could not be held accountable for its "successful stimulation of consumer desire" and the respectable woman could not be held personally responsible for her regrettable actions (196). Consumerist ideology would remain unscathed, as womanhood itself could be depicted as the ultimate culprit. Abelson's book was particularly well received by critics, who found it very well written and full of interesting ideas, and found that the research carried implications across wide-ranging historic disciplines. A few questioned whether the evidence was sufficient for Abelson's broad conclusions. Specifically, Mark C. Carnes, writing for The Business History Review, questions Abelson's almost exclusive use of trade journals in her analysis of the extent of the shoplifting phenomenon, and wonders whether the "dire pronouncements of merchants ... accurately reflect the magnitude of shoplifting."8 Perhaps, he suggests, shoplifting wasn't so common as Abelson supposes. Carnes' perceptive review also calls into question Abelson's complete dismissal of kleptomania as a legitimate medical pathology, a point also made by
Trustpilot
Copyright © 2022 Thriftbooks.com Terms of Use | Privacy Policy | Do Not Sell or Share My Personal Information | Accessibility Statement
ThriftBooks® and the ThriftBooks® logo are registered trademarks of Thrift Books Global, LLC