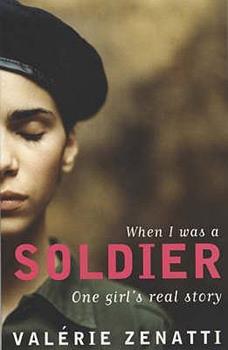 When I Was a Soldier

What is it like to be a young woman in a war? At a time when Israel is in the news every day and politics in the Middle East are as complex as ever before, this story of one girl's experience in the... This description may be from another edition of this product.

Published by Thriftbooks.com User , 12 years ago
Interesting and honest view of an older teen's experience of two years in the Israeli army. Although the threat of violence looms, Zenatti does not see actual combat. It was very interesting to read about her daily life and training. The officers were very human (and even portrayed as caring) rather than as "break 'em down to build them up" type of drill sergeants I expected. More about "teen issues" (boyfriends, friends, finding your place) than political ideology, but still well-worth the time to read it. This books gives you an Israeli point of view(with sympathy for Palestinians as well.) This would be good tandem reading with books more oriented to the Palestinian POV, such Joe Sacco's FOOTNOTES IN GAZA (astounding book!)and/or Anne Laurel Carter's THE SHEPHERD'S GRANDDAUGHTER, in terms of showing "the other side."

Published by Thriftbooks.com User , 14 years ago
In the book, When I was a Soldier, in my opinion, this was a very good memoir. The author, Valerie Zenatti, did a great job about writing what its like to be in the military for Israel. I really felt a sense of connection with the characters in the book. She did a great job at writing about scenery, character building, and self-inquiry. This book did a good job writing about scenery. When I was reading her descriptions of the surrounding area, I really almost felt as if I was there and I was easily able to picture the spot she was talking about. When she was talking and describing Tel Aviv, I could picture what it looked like in my mind. Her character description was also very well done. When she described certain characters I could imagine what they looked like without much thought. The descriptions she used were very in depth, but easy enough for almost any one to understand. The book also did a great job at showing her self-inquiry, it almost made me think about myself. From the time she left her home, to the time she left the military, she changed a lot. She started to question about the ways she thought or acted. When I read this book I also thought about the way I thought about some things. She was once immature and more worried about what people thought about her, she cared more about some guy who would stand her up rather then being the stronger person. When she started to question that, she started to become stronger, and now she cares more about doing what is right for her and what is best for her, rather then worrying about what some other person thinks. This memoir made me think about that a little bit as well. The character development in this memoir was also done very well. Her character started as a co-dependent eighteen year old about to go off into the military and she only cared about her boyfriend and her friends and she needed them. By the time she got out of the military, she was independent and didn't need her friends to live but still loved to have them around. Her other characters that she was with in the military also built up a lot of their own personalities as the memoir progressed. A lot of the characters in the story, by the end, had their own personalities and contributed their own special part to this memoir. In my opinion, that is one of the things in this memoir that made it very good. (And theres my extra credit for critical lit)

Published by Thriftbooks.com User , 15 years ago
Book Review of When I Was A Soldier: When our grade was assigned to read a nonfiction book, I groaned. The class then went to the library to pick out, either a biography, an autobiography, or a memoir. I searched and searched for a book that didn't look too boring, but all were things like Jane Arre or something else without a plot. I was on the verge of despair, when I saw a book in the corner of the room that didn't have soft watercolor pictures of ladies in frilly hoop skirts and a scrawling title, but that had a picture of a young girl in an army uniform on it with the title When I Was A Soldier. Ever since I was little, I've always wondered what it would be like to be a soldier and for many years I had the dream of one day joining the army and being a hero that girls everywhere would look up to and say that girls could do anything. Now that I've grown out of that aspiration, the feminist part of me, and the interest in the army remains, so I picked up the book. The back cover had a passage form the book on it that mirrored perfectly my views; "Why should I hide the fact? I'm fascinated by my submachine gun. They're instruments of death and we're finding them easier and easier to handle. We don't think for a moment that we might that for real someday. But at the same time, it's the ultimate sign that we really are soldiers, on completely equal terms with the boys. And it makes me feel proud." It's perfect. I checked out the book and put it in my locker to take home, and eventually forgot about it. That night I remembered it and started reading. I couldn't stop. This book is a passage in Valerie Zenatti's life that illiterates the duties, drawbacks, and rewards of being in the Israeli army. She writes about the average soldier in a peaceful base far away from any fighting. You wouldn't expect this; I was expecting wondrous heroics and endless action. But I was wrong. Valerie describes her two years in the army with a sense that she is living through it at that very time, and not years later. She vividly describes the conditions at her bases and her tasks with the emotions of a growing teen-ager. She writes about her anger and sorrow on losing friends and lovers, and her wishes for the future on gaining new ones. I was very impressed by this book and how it was written. I highly recommend this to young adults and those who have a bad stereotype of nonfiction books. This will change how you look at the genre. I truly intend to read more nonfiction books in the future.

Published by Thriftbooks.com User , 15 years ago
When I first saw this book, I thought I was in for a great war story. This book is more than that. Zenatti tells her fantastic story about how she managed to leave her friends and family, loose her boyfriend, and still work so hard in the Army that she earns to be in the Secret Service. Usually when you read biographies, you think of endless boring facts, but when you read this, it's like you are right there with Valerie. You feel what she does, and you just get right into the story. I recomend this to, well, everyone. If you do plan to get this book, I hope you will enjoy it as much as I did.

Published by Thriftbooks.com User , 16 years ago
When I saw the "JUV" label on the spine of Valerie Zenatti's memoir I must confess I was quite a bit apprehensive about delving further into the book than its front and back covers. However, I must urge you not to make such a mistake; this book merits a read, not just a look. I was born and raised in New York, about half a world away from Israel: the notion of entering mandatory military service upon turning eighteen is so alien that I had to continually remind myself while reading that this work was not by Robert Heinlein but rather by Valerie Zenatti. Nonetheless the latter, serving as protagonist and narrator, does a wonderful job shepherding her reader through compulsory "peacetime" military service. This is hardly the demoralizing world of boot camp we have all seen 307 times in literature and film. Valerie isn't dressed-down by an evil drill sergeant, her head isn't shaved, and she doesn't lose her identity to become a faceless cog in the military machine. Valerie's story and rite of passage is much subtler. She drifts apart from her friends but only as much as can be expected. Her superiors are more often than not women a few years older than her. At the conclusion of the story she doesnt find herself in a pitched gun battle but instead in a routine surveillance op. The freshness of the tale never ceased to keep me involved. Politically the book is fairly neutral. Characters express both left and right-wing sides to Israel's questions, with the author actually falling more on the former. Though I am not someone intimately acquainted with the struggle between Israel and its neighbors, I beleive that this book would be acceptable to most audiences. First and foremost it is the story of an 18-year old girl; it rarely stops to comment on politics and certainly never preaches. "When I Was a Soldier" is an exceptionally quick read (indeed so much so as to be a detriment; though the book has a decent narrative structure I would have preferred more of Valerie's second year and a less abrupt ending) and a good one. It has not lost its wit, charm, or exigence in translation and I thoroughly reccomend it.
Trustpilot
Copyright © 2022 Thriftbooks.com Terms of Use | Privacy Policy | Do Not Sell My Personal Information | Accessibility Statement
ThriftBooks® and the ThriftBooks® logo are registered trademarks of Thrift Books Global, LLC